How is August already here?

Now that my oldest is attending the official school system our mindset about summer is taking a serious re-adjustment.

We can't no longer plan for get aways or races in late summer or fall that are not exclusively on the weekend.

And then WE are going to start fall soccer and I say "WE" because now it is going to be a family project... I will be the coach of a group of 1st graders looking to learn about soccer.  This proposition either will turn out to be an amazing experience or it could turn out to be a complete disaster... Stay tuned as I will do my best to keep you posted.

Speaking of interesting experiences getting to know the clotting story of this month's CLOT BUSTER Athlete of the Month really blew my mind.  Not only because of where it went down but how the road to recovery has shaped this young individual on to a youngish adult who is training for the NYC Marathon and enjoy life each and every day.

Please let allow me to introduce to you AMARIS WHITE your AUGUST CLOT BUSTER ATHLETE OF THE MONTH!

Read on to find out about her extraordinary story... 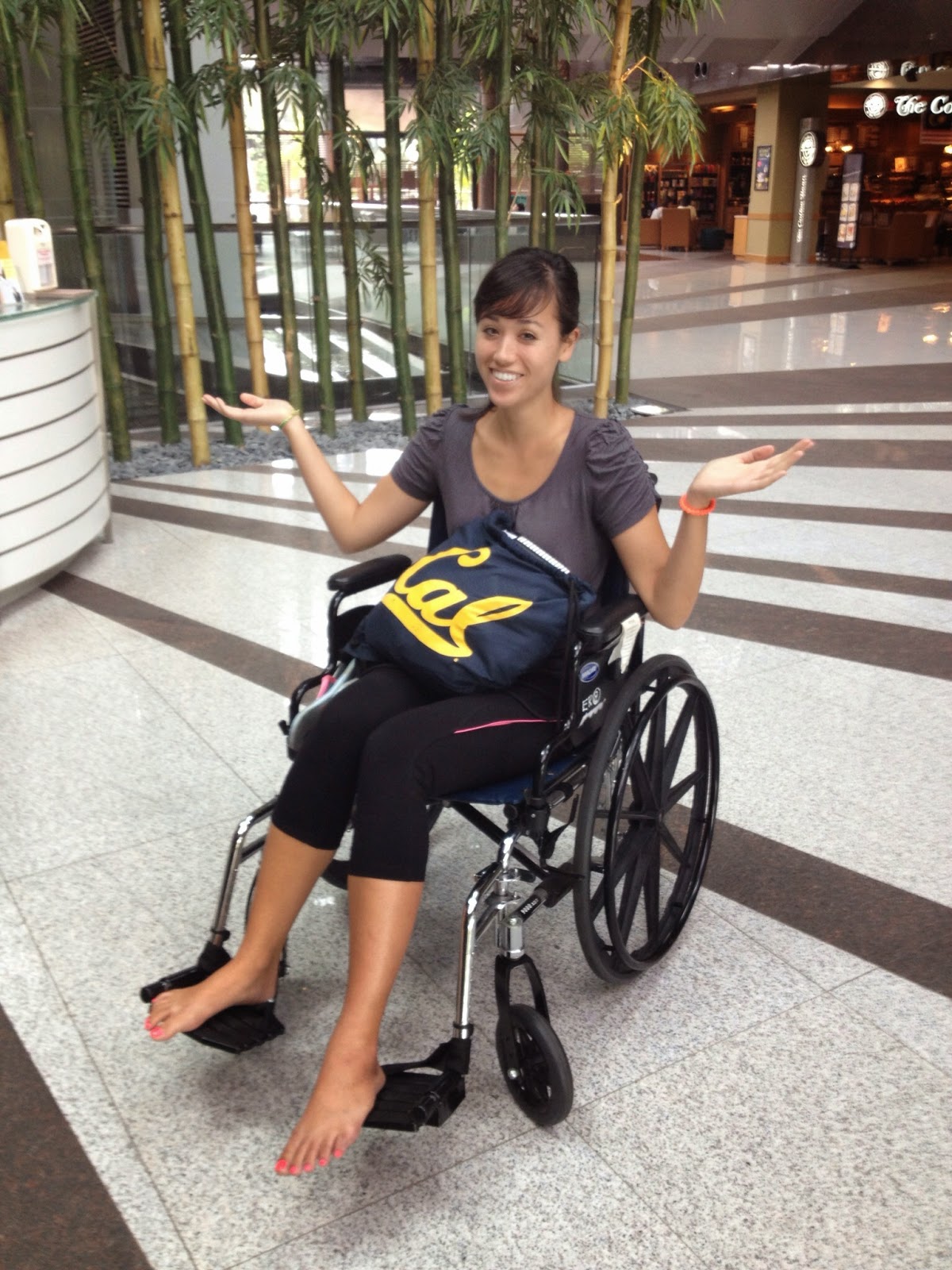 1)      What is you sport/activity of choice? Why do you enjoy it?
I've never considered myself an athletic person, and I've always been a bit of a klutz, but over the last few years running has become a huge part of my life--for social, mental, and health reasons. It helps me clear my mind of daily stresses and gives me a social outlet. Most importantly, running saves my life.


2)      How did you get started in that sport?
I used to run high school track, but I was never much good. I started running during my third year of law school to clear my head. It was a good way to de-stress and be outside.


3)      What is the latest milestone you achieved or plan to achieve?(Long bike ride, some race coming up or that you did)
I'm training for the NYC marathon! After my DVT doctors told me I would never be able to run again. Running had never been a huge part of my life. I had run two half marathons in the year before my leg clotted, and I was really upset to hear I'd never be able to do so again. Five post-DVT half marathons later...I'm determined to be better and stronger than I was before and run my first 26.2!


4)      Tells about your clotting episode.  Are you on blood thinners now? How long were you out of commission?
My clotting episode was particularly traumatic because I was traveling abroad in Malaysia with my friends. It was two years ago, and I was only 25 years old. My roommate and I went out for dinner one night, and suddenly my leg became tight and swollen, and within an hour I could no longer walk. My leg was a darkish color and progressively more and more painful, and my foot was becoming blue. It took doctors two days to diagnose me, and when they finally did, I learned that I had one giant blood clot going from my left ankle all the way to my heart. I received the wrong treatment because the Malaysian doctors had never seen a clot as bad as mine!
I ended up flying to Japan (where I have family) to get treated more aggressively and was in the hospital for a month. The doctors discovered multiple PEs, gave me an IVC filter (which ended up getting stuck), and they hooked me up to an IV to melt my clot. Unfortunately the treatment wasn't aggressive enough, and by the time I was back in NYC, my clot had become scar tissue. Doctors told me the clot was now permanent and that I would probably not run again.
Thankfully I found a doctor in California that removed my IVC filter, gave me a stent, and has been more aggressive with my treatment. With his help and a lot of exercise/running, I have been able to get to where I am now. Overall, I have had seven surgeries in four hospitals over the course of about four months. I'm on xarelto and a baby aspirin, maybe for the rest of my life. 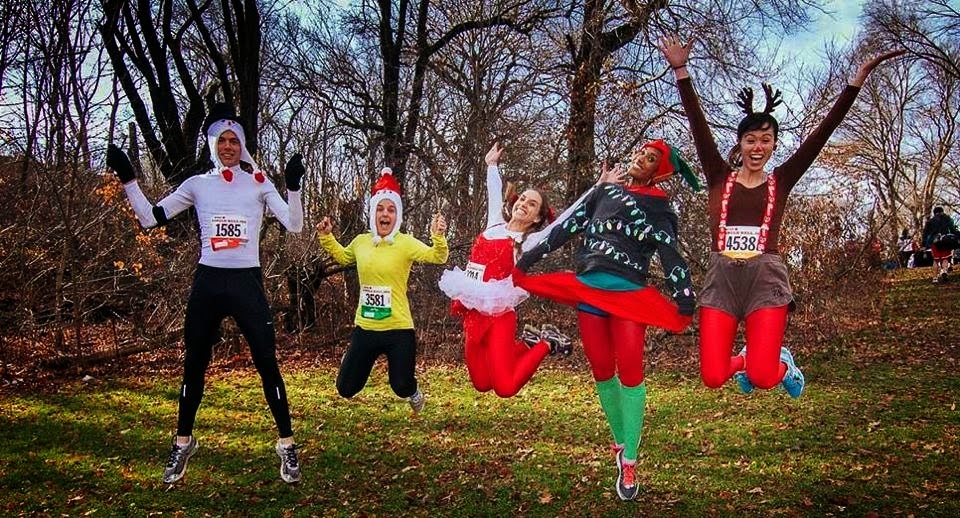 5)      When were you able to get back into your activity?  How did it feel that first time?
It took me a while, but I finally started going to the gym about four months after my initial diagnosis. I think this time would have been shorter had I initially received aggressive treatment.
The first few weeks of working out were terrible. My leg was filled with permanent scar tissue (clots become hard after the first few weeks) and the blood could go in my leg, but not out. I definitely wanted to just go home and give up. But I kept going to the gym every day and gradually pushed myself to walking, jogging, running. The more I pushed myself, the more my body compensated by making new collateral veins. Running was therapy. The more I ran, the healthier I became.
6)  What is your favorite piece of gear for your favorite activity? (Bike brand, running shoes, perhaps a running singlet or the Clot Buster's
Running Polka-Dot Technical Shirt...)
I would definitely love to get my hands on a polka-dot technical shirt, but for now my favorite new toy is my Garmin Forerunner 10 watch. It's simple--keeps track of time, distance and pace. I can leave all other technology behind and focus on just my run.
7)  How much are you getting out doing your sport?  (Everyday you do some training, 2, 3, 4 times per week)
Currently with marathon training, I'm trying to do 4-5 times per week. It's not easy while working, but I'm doing my best. Weekends are for my long runs and I will definitely be sure to do all those runs!
8)   What is your favorite food?  Either generally or after a workout.  For me there is nothing better than a Chipotle Burrito...
Lately I've been getting into chocolate milk. Gives me protein and calories--and it's delicious! 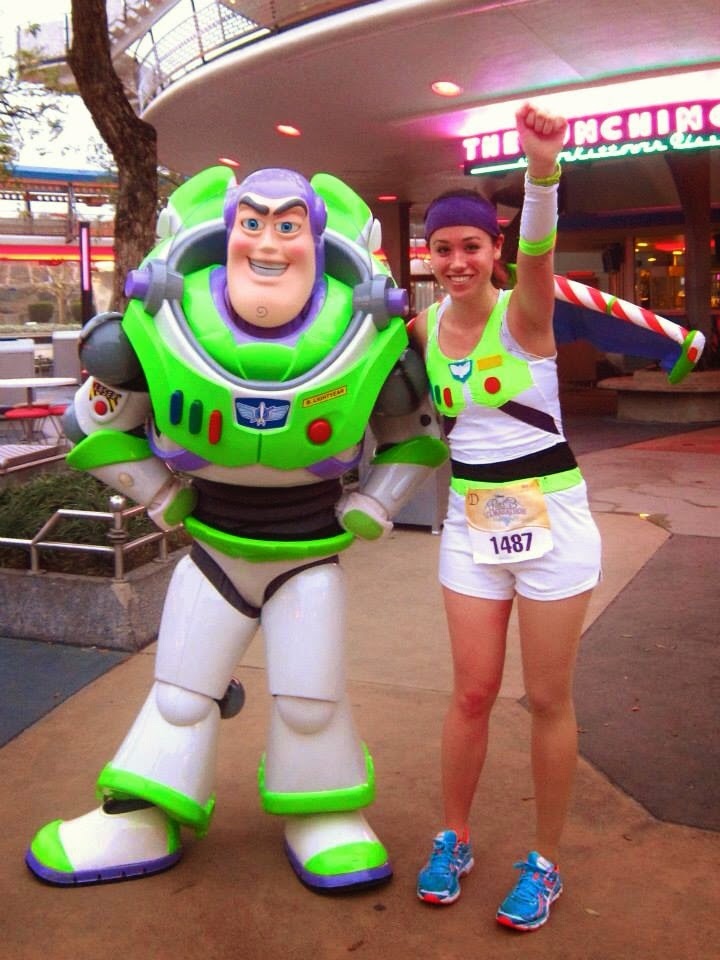 9)  If you could go some place to visit and explore, where would like to go?
That's a tough question. I love to travel and want to see the whole world (and space). At the top of my list right now are Taiwan, Korea, and Iceland.
10)  What would like to say to someone who is going through a clotting episode, perhaps very similar to yours?  How can people return to do what they enjoy? Tells about your concerns and what you look out after as you got back.
Don't give up. Don't let yourself become the victim. DVT and PEs are horrible, and they can derail your entire life and leave you with lifelong physical struggles. But with patience, discipline and sheer determination, it is possible to make a recovery and be better and stronger than before. Your body is amazing, and if you work with it, you can make enormous progress. When I first started running, I honestly could not imagine that I would be running multiple half marathons a year and training for the NYC marathon. But I took it one day at a time, and I slowly realized that my body was capable of a lot more than even I realized, and so I kept pushing. You can too! :) 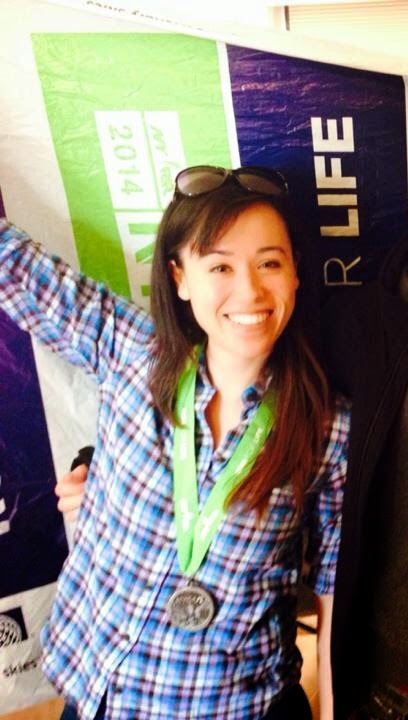 Thank you for your amazing and inspirational website!! I'm sure there are many people that read this and are motivated to keep going!

I don't know if there's space for this, but I am trying to share my DVT/PE story by getting on the cover of Runner's World Magazine. People are allowed to vote daily and any support would be great (Runner's World picks 5 men/women to interview to be on the cover of the magazine. Social medial helps, but you don't need to be top 5 to get an interview. I just want to be on their radar so they will hopefully share my story.)

Also I'm trying to keep up a blog where I talk about DVT and my learning experiences. My goal is to post weekly with an update on my marathon training. I learned a lot about DVT and recovery through debacle and hope that this site can be a small resource to someone!

Sadly blood clots can happen to anyone and at anytime.  But how we overcome the challenge that clots throw in front of us can be the galvanizing force that can shape the rest of our lives.

Certainly Amaris is an example of that process.  THANK YOU so much for sharing your story with all of us.

Please be sure to vote for her to see if we can one of us CLOT BUSTER Stop The Clot Athletes on the cover of Runner's World.  Go ahead vote for Amaris and VOTE OFTEN!!!