Here is hoping that 2015 started in splendid fashion for all who is reading this post!

I am very much looking forward to what 2015 has in store for all of us.

I can't think of any other way to start these series of posts on the new year with the story of a blood clot survivor that for sure will get you off your feet and believing that anything is possible!

Please allow me to introduce to you KATHRYN SPENCER who this past January 15th celebrated her CLOTIVERSARY but before that she made an incredible come back that will have you picking up your jaw off the floor just like mine did when I got hear Kathryn's story for the first time...

But I need to stop and let her written voice tell you all about!


"January 15, 2013…that is my clotiversary. I woke up that morning with a stiff right calf. It was quite achy, but I thought it was due to an extra hard workout the day before. I tried to go to the gym and “work the ache out”, but it didn’t go away. By this time, I was finally awake enough to look at my calf, and realized it was swollen. I knew right away that I had a blood clot, but I had absolutely NO idea how serious this was. I called in for a same-day appointment, and the doc kind of rolled his eyes when I told him I thought I had a blood clot. He took one good look at my leg, then rushed me to the Doppler scan area. This primary doc was absolutely fabulous that day, bumped everyone to get me taken care of, and had ordered ALL of the appropriate blood tests before getting me to the ER. 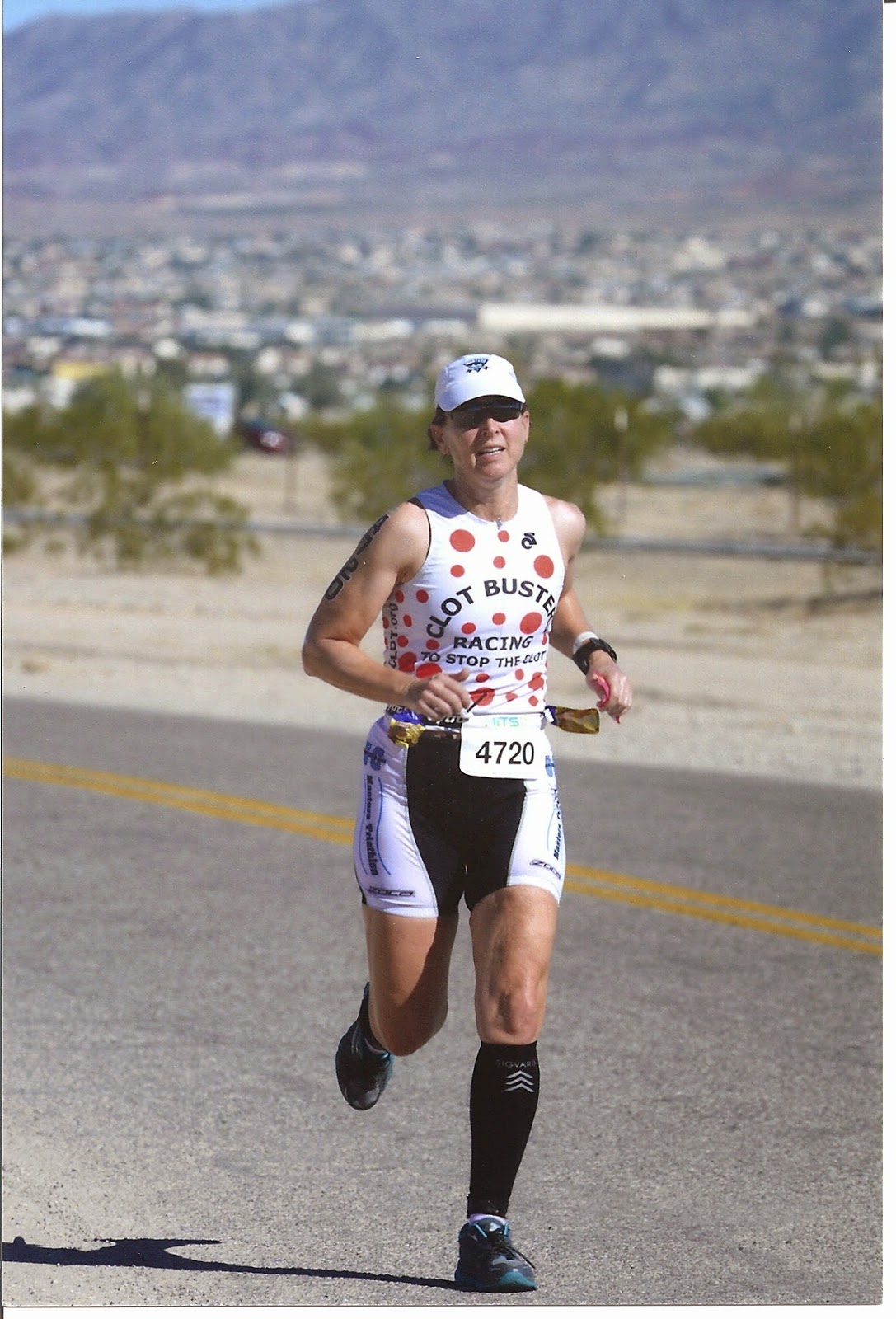 In the ER, everyone was also very solicitous, getting my treatment with Lovenox started right away. My calf was becoming more and more achy as the day progressed. It was at this point that I started to realize that this was not a trivial “take this pill for a week, and you’ll be fine” kind of ordeal. When I got home and started Googling (the worst thing we could do, but we all do it, right?), then I started to freak out. By this time, my calf was about twice normal size.
I tried to get back to my normal work schedule, but could only deal with the pain from my calf for about 4 hours. Sitting was horrible, and standing was excruciating. Grocery shopping was limited to a 10 minute trip, before the pain became unbearable. I had to adjust my commuting schedule to get around rush-hour, because I couldn’t stand the pain.
Oh yeah, and did I mention that I’m a triathlete? I had just started training for my first half-Ironman when I was diagnosed. In retrospect, the first symptom was gasping during swim workouts…I thought it was because the workouts were hard effort, but I couldn’t deal with the controlled breathing – guess that was the PE part. So post-clot, I’m lying in bed, feet elevated, heating pad on calf, trying to deny the reality of never being able to run again. Thankfully, I found Roland’s blog, several FaceBook groups, and a blessed DVT comrade on SlowTwitch. She told me her own experiences and inspired me to believe I could do triathlons again. Still, the major depression was awful and lasted for several months. 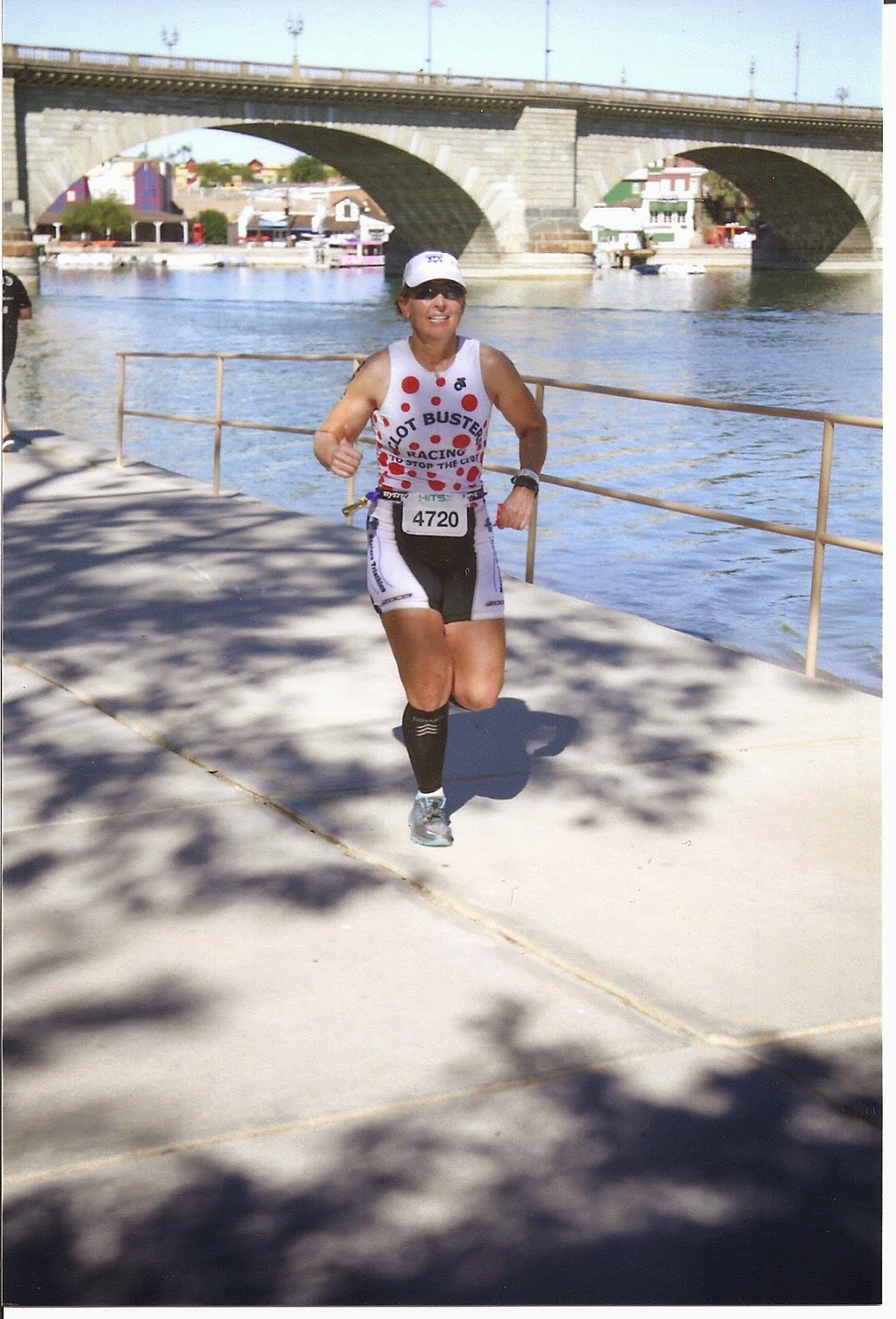 I returned to the pool after about a month. Kicking drills hurt, but everything else was OK. My cardiologist absolutely refused to allow me to ride a bike, even after I pestered her with questions of when and what kind of swim/bike/run I could do. After being VERY persistent, she finally said “oh, you’re one of THOSE people”. I thought I had a big fight on my hands. I did try to ride my bike on the trainer, but it was about three months before I could pedal more than an hour (calf swelling from being upright). I worked up to walking a mile, then two, then tried to walk/jog for 20 minutes.
A return visit to my cardiologist lifted my spirits, as she said “since I know you want to ride your bike so much, I’m OK with you stopping the Coumadin.” I wanted to hug her. My first bike ride was so scary, riding the brakes down every hill. It had been 5 months and I was nervous. I did have several return trips to the ER, because of severe calf cramping, but this was due to me trying to return to the workouts I knew. I began to realize I needed to take things slower, but that eventually I could build back up…I just couldn’t do it all at once. After 10 months, I was able to do my one-and-only tri of the year, a sprint. I finished 2 minutes off of my previous best….I’M BACK!! 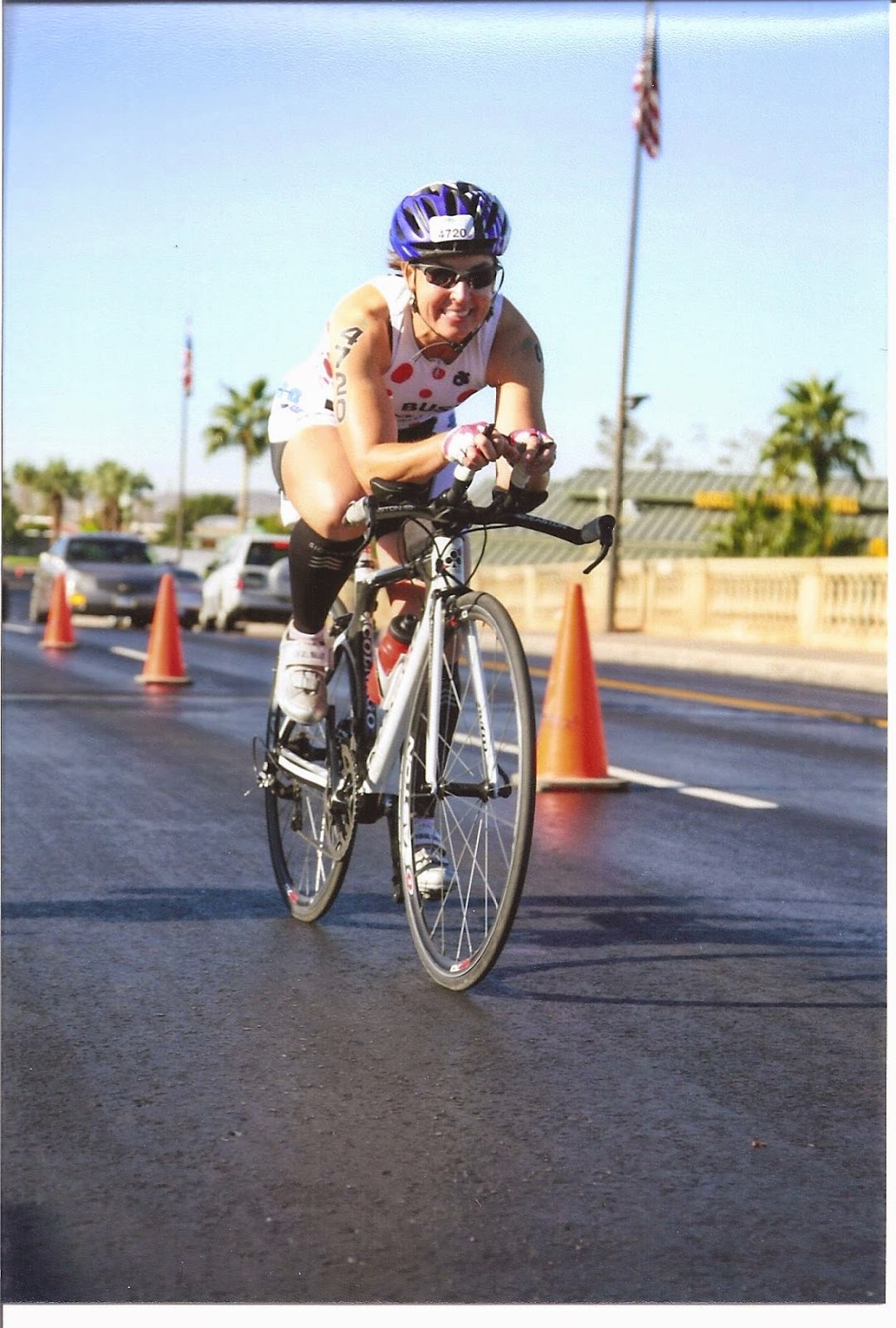 Over the next year, I slowly worked up to longer distances, competed in an Olympic distance tri with good results, then decided that it was time for that half-Ironman. With my coach, we worked out a slow and steady training schedule. My goal was for the Lake Havasu half-Ironman in Arizona in November.  The training worked well for me, as it was mostly long, slow distance at low heart-rate. I was ready for this half. During the race, I kept thinking “but I’m not supposed to be here; I’m supposed to be dead”. Then I’d get a big grin, and say “but look at me now!” In every picture, I’m smiling. I had a great race, broke 6 hours, and can’t wait to do the next one. I chose to wear the Stop the Clot jersey to show my support for all of my fellow DVTers, raise awareness of symptoms (I answered a lot of questions that day), and to thank everyone who supported me along the way.
I still have to be wary of hard workouts. I’ll have a swollen calf the day after a long run or bike ride (need to plan an easy following day). If I take a break, I need more time than normal to return to previous fitness. Those 8-week plans for a half-marathon? Double that time for me. But I’m back. Thanks to the encouragement of Roland, the FaceBook groups, and other DVT/PE sufferers who’ve returned to triathlon, I’ve become one of the mentors who can tell you it’s possible…possible to return to doing the things you love, possible to compete as good (or better!) than before, and possible to live a normal life. 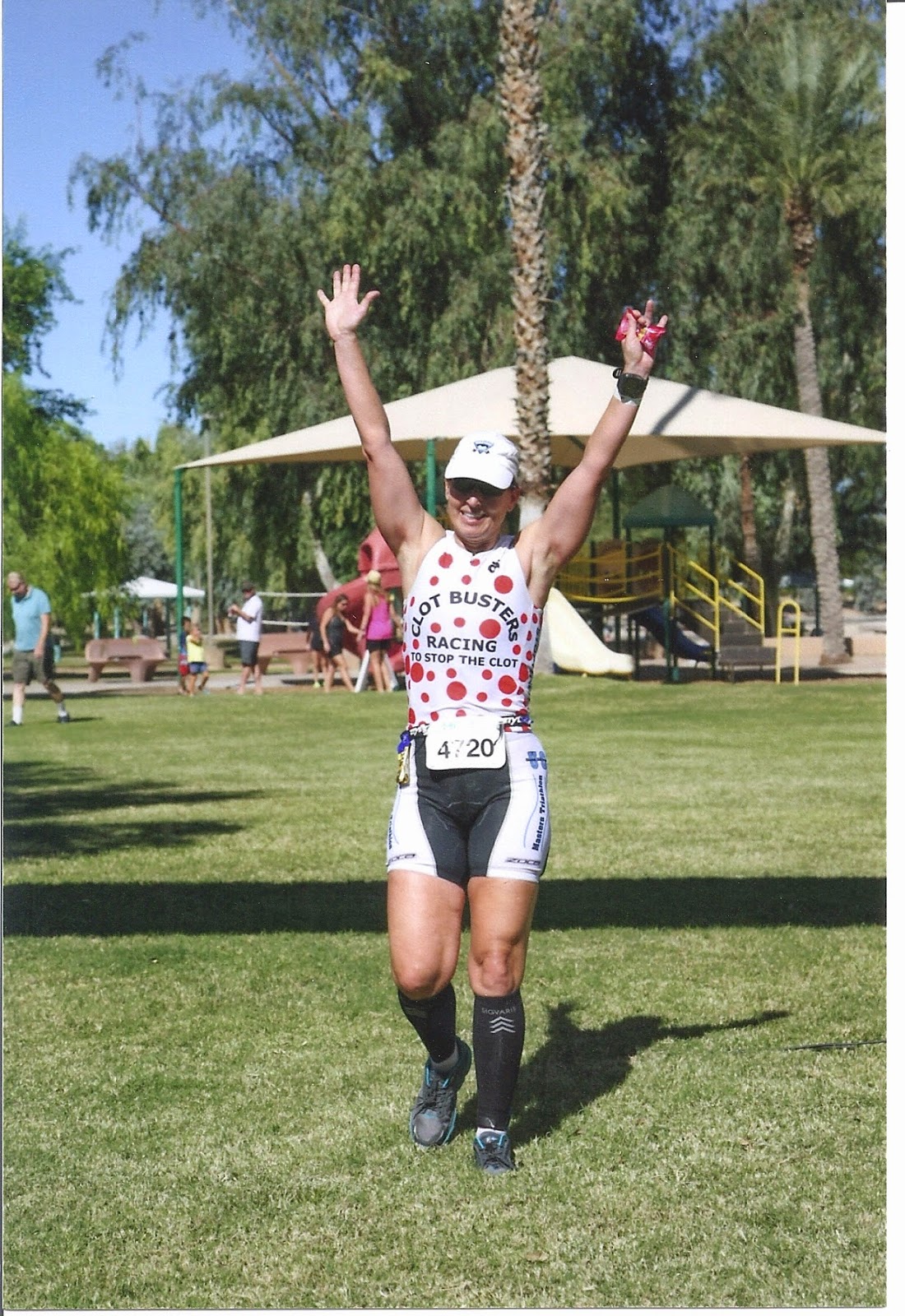 Yes indeed Kathryn IS BACK... AND ALMOST BETTER THAN EVER!

Can't wait to hear and read what else Kathryn will accomplish in the near future.  So glad to see that she is taking the polka-dots and spreading the word while she is out there racing.  THANK YOU!

Be on the lookout for this lady... she may blow past you when you least expect it.

Thank you Kathryn for your willingness to share.  DON'T EVER STOP THE INSPIRATION no matter how hard it gets!

Dear Kathy You are such an Inspiration to many, like yourself, who have made it!! Your strong will and devotion to what you love, helped tell your story. I am survivor also. Nearly died in 2011 of a DVT/PE. Deadly one! But I am thankful and will always thank GOD for each new day. I pray your story reaches others, to let them know just how serious these Clots can be. It just may save a life. Keep on your Journey of Life! God Bless You.
Mary Brewer
mbrewer5164@gmail.com