It is only fitting that on this year in which we will be witnessing the London Olympics our Athlete of the Month would be someone from "across the pond"...

I am incredibly lucky to be able to get in touch with individuals from all over the world.  It is a thrill to reach to far away places and learn of inspiring stories from clot survivors in different countries.  The challenges and the drive to overcome them is the same regardless of the continent and the language.  Stories from clot survivors continue to motivate me and give me the extra push I need to continue spreading the word about blood clots and blood clotting disorders to anyone and everyone...

Please allow me to introduce you to Mr. CHRIS BROWN our JUNE ATHLETE OF THE MONTH who so kindly decided to join the line of inspiring stories by sharing his own.  Being from England he is not a footballer (I am talking about the real deal here people... the beautiful game!) but a runner with a story that it is worth reading... 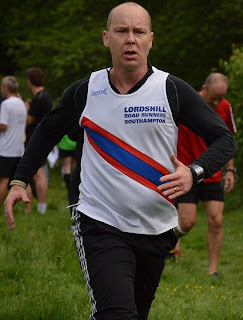 1)      What is you sport/activity of choice? Why do you enjoy it?
I enjoy a number of sports, but running is definitely my favourite. I have been trying to think why I enjoy it, but I really have no idea!

2)      How did you get started in that sport?
I’ve been into running since I was at school and took part in quite a few road races in the 1980s including the 1986 London Marathon and an unusual one-off 10 mile race on the M25 (London’s orbital motorway). Thankfully this was before it had opened.

Whilst at college I joined a couple of running clubs (Chiltern Harriers and London Metros) and at the former got involved in track running for the first time; mainly 200m, 400m and 800m. I was not particularly fast, (PBs of 24.2, 54.6 and 2:05 respectively) so a GB vest was never going to be the outcome, but I really enjoyed the team aspect of the track meetings.

3) What is the latest milestone you achieved or plan to achieve? (Long bike ride, some race coming up or that you did)
The furthest I’ve run since having DVT is 10 miles at the Great South Run and to be honest I’m a little nervous of running further. My leg seems to be able to cope as long as I don’t go too fast, so I’d like to try a Half Marathon. I’ve just entered the New Forest Half Marathon in September, so we’ll see how that goes. My main aim is just to carry on participating in running for as long as I’m able.

4) Tell us about your clotting episode. Are you on blood thinners now? How long were you out of commission?
1992 was the year that I discovered that training actually worked. I ran the London Marathon again and this was followed by a string of modest PBs at varying distances. Unfortunately it was also the year that I experienced Deep Vein Thrombosis.

As seems typical, diagnosis was somewhat delayed. It was partly my own fault for making an assumption that a lower back ache that quickly developed into pains in my leg, was sciatica or similar. I went to an osteopath that a friend had recommended and unsurprisingly his treatment didn’t help, so I visited my General Practitioner. (I should have done this in the first place). However, he didn’t examine my leg at all, but just referred me to an orthopaedic consultant.

To cut a long story short, I had a couple of appointments with the consultant and I don’t recall any specific diagnosis. He was about to send me away for another couple of weeks, when I asked why he thought my leg was so swollen. I think ‘the penny dropped’ at this point and he asked his colleague (a vascular surgeon) to examine me. He took one look at my leg, performed a simple Doppler test and admitted me to hospital there and then. Ten days of heparin and transition to warfarin followed and I am now on warfarin for life. I often wonder how different my prognosis might have been if I had been referred to the vascular consultant in the first place rather than after about 3 or 4 weeks.

It turned out that Protein C deficiency was the root cause of the DVT, though I suspect that dehydration from a weekend of racing in hot weather, including my first and only time of running 10 miles in under 65 minutes, might have tipped the balance.

5) When were you able to get back into your activity? How did it feel that first time?
Difficult to remember now, but it must have been a good few months before I returned to any exercise. I started by going swimming regularly and then progressed to run/walking, gradually increasing the distance before I had to stop and walk. Due to the damaged valves in my leg and what I now know is called venous insufficiency, my leg felt extremely achy when I ran, but eventually it improved to a manageable level. The closest I can get to describing it, is being on the verge of cramp and after a few miles it feels like I have training weights strapped to my right calf. On the plus side, my left leg always feels great in comparison. Perhaps I should consider a hopping championship. J

6) What is your favorite piece of gear for your favorite activity? (Bike brand, running shoes, perhaps a running singlet or the Clot Buster's
Running Polka-Dot Technical Shirt...)
Can I choose two? Firstly there is the Venosan 2003 Compression sock. It’s not the most stylish piece of kit, but I don’t think I could run very far without it.

The second item is my Lordshill Road Runners vest. It represents a running club with a great ethos and a friendly reputation and pulling on the club vest reminds me that despite the DVT, I’m still a runner.

7) How much are you getting out doing your sport? (Everyday you do some training, 2, 3, 4 times per week)
I usually get out running two or three times a week. On a good week maybe five times. A year ago I discovered a weekly 5k event called parkrun, which takes place all over the country (). So at the very least I try to run my local parkrun every week.

8) What is your favorite food? Either generally or after a workout. For me there is nothing better than a Chipotle Burrito...
Now that’s an easy question – marmite toast.

9) If you could go some place to visit and explore, where would like to go?
There was a television programme in the called Stephen Fry in . It was about a tour of the in a taxi. I’d like to do something similar, but perhaps not in a taxi!

10) What would like to say to someone who is going through a clotting episode, perhaps very similar to yours? How can people return to
do what they enjoy? Tells about your concerns and what you look out after as you got back.
I used lots of small, but progressive targets, trying to run a little further each time before having to walking and recover. I guess it depends on your particular medical circumstances, but for me, I did gradually improve over a long period of time and eventually I got back to road and track running, albeit a lot slower.

So you might have to forget chasing those old Personal Bests. That’s fine though, as you can now go for a whole new set of post-DVT PBs. They are just as valid, but probably a whole lot more satisfying than the originals. 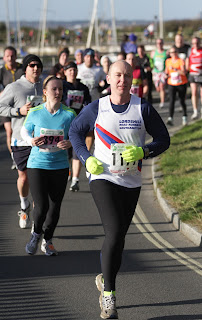 Chris - THANK YOU a million times over for sharing your story and providing us your thoughts on how you came down with the clotting incident and how it has impacted your life.

There is no question that you were able to cope with the challenge on hand and shift expectations to a more reasonable level which in my opinion is a very big key for success when facing the adversity of a clotting incident.

Here is hoping that you get to go on that tour of the US... At the rate that I am going I will be able to supply you with contacts of folks all over the US you share a similar story to yours and I am sure would be willing to guide through their home state.  Ohio is waiting for you to start whenever you are ready...