June Athlete of the Month

There is no shortage of inspiring stories of blood clot survivors out there.  I love coming across people and learning about their stories.

At this time of the year when the weather heats up is when my CLOT BUSTER #StopTheClot polka-dots get going so that I can do my part to spread awareness about blood clots and celebrate survivors while racing whenever I can. 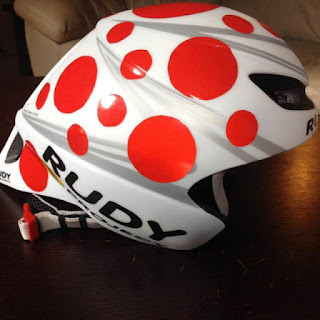 Speaking of celebrating survivors... Once again we make a turn to another month in 2016 and as such I would like to share with you another remarkable personal account of survival and dedication to return to action.

Please allow me to introduce to you LIZ SHEETS HOSKINSON who is an individual from which you can draw great inspiration as you learn from her challenges with blood clots and how she was able to overcome them.

Thank You Liz for your willingness to share your story!

1)  What is you sport/activity of choice? Why do you enjoy it?
I enjoy running and biking. Running has helped me relieve stress and anxiety. 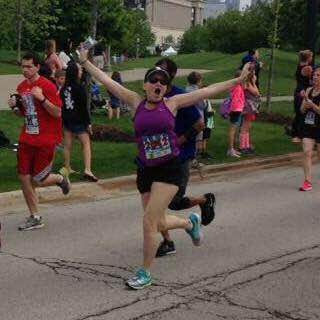 2)  How did you get started in that sport?
Got started running 18 yrs ago was suffering from post Partom depression.. I tried everything.. Running helped a lot.

3)  What is the latest milestone you achieved or plan to achieve?(Long bike ride, some race coming up or that you did)

I've run a lot of half marathons. I ran my first in memory of my brother who died in a car accident 7 yrs ago yesterday. It really helped me with my grief. I am currently signed up to run my First Marathon. Chicago.

4)  Tells about your clotting episode.  Are you on blood thinners now? How long were you out of commission?

I had a DVT in my calf 3.5 yrs ago after foot surgery. Got tested Dr. Said I only needed to be on blood thinners if I went on a long plane ride or became unable to walk around.

This year on January 23rd I ran the F 3 half marathon on the lake in Chicago and felt great. The next day my chest and back felt tight. The day after that I went to work and had the nurse I work with listen to my lungs but she didn't hear any air moving in my left lung.

Went to walk in care and the Doctor who saw me wanted me to take an ambulance to the hospital after making his evaluation.  I refused since I didn't feel that bad. But considering the urgency indicated by the Doctor I ended up driving myself to the ER.. Later after many different tests I found out that I had multiple pulmonary embolisms in both lungs. I seriously thought maybe I had pneumonia or something. It was a Total shocker!  I was told that I am very lucky as I could have just dropped dead at that race a few days before.  Now I'm on blood thinners for life. My mom has a strong history of clots and so do other of my family members. I seriously didn't feel that bad. Just felt tight and just didn't feel right. 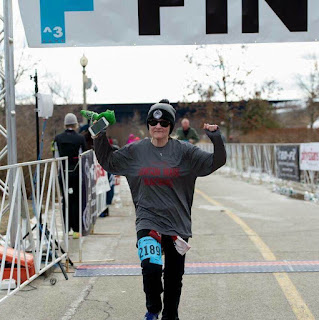 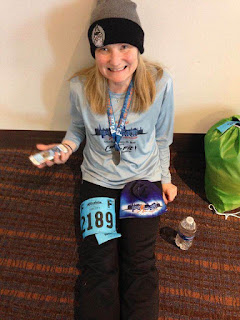 Liz finishing that faithful race this past January in which various blood clots almost brought her down...

5)  When were you able to get back into your activity?  How did it feel that first time?
Well... after being released I ran like two weeks after the clotting incident and Haven't stopped... 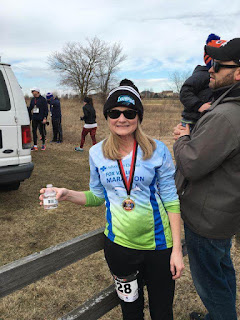 The picture above is of Liz at the finish of her first race after her multiple PE's... she reports that it was hard and some of the hills were rough but despite the effort her smile always remains...

6)  What is your favorite piece of gear for your favorite activity? (Bike brand, running shoes, perhaps a running singlet or the Clot Buster's Running Polka-Dot Technical Shirt...)
I love my Saucony hurricane shoes. I'd love a clot buster singlet I'd say I've earned one...

>>> Liz from the editors desk you are right... We need to have you running your FIRST Marathon in Chicago in the CLOT BUSTER #StopTheClot polka-dots... Drop me a line and we can make arrangements!

But I run as much as possible when life allows... Love racing and try to do it whenever I can so that I can push my limits by running with pacers who can make me faster. 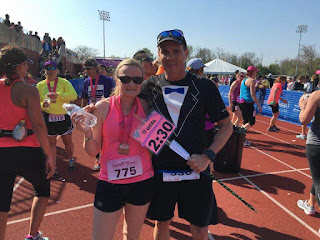 8)   What is your favorite food?  Either generally or after a workout.  For me there is nothing better than a Chipotle Burrito...
Favorite food steak tacos.

9)  If you could go some place to visit and explore, where would like to go?
I been dying to go to Hawaii.

10)  What would like to say to someone who is going through a clotting episode, perhaps very similar to yours?  How can people return to do what they enjoy? Tells about your concerns and what you look out after as you got back.

I fell and hit my head at the gym of course about a month after my PE's had to get a CT and had a slight concussion. I've learned to be more careful but I've also learned to live everyday like its your last...
Did my first speed work out ever this past Tuesday...Getting ready for Chicago...!  ANYTHING IS POSSIBLE for those who believe!

Here is wishing you the best of luck as you are preparing for your first marathon in Chicago... which of course your will be running in the CLOT BUSTER #StopTheClot polka-dots!

So happy you are doing so well now after such a close call! Way to go Liz!!