Is it really the end of November already?

Is it really time for Thanksgiving?

Is it really time to make the very difficult choice between Pumpkin Pie versus Pecan Pie after the turkey dinner?

Hard to believe that it is this far in the year.

Even harder to believe is that I did not get around to post about November's Athelte of the Month until now...

As of late I've been in "search mood" looking to see if I could find an inspiring story out there I could share with you guys. The right combination of search words got me to find the following article I would like to share with all of you.

Please allow me to introduce to DENESHIA LARSON from Gainesville, GA. Although I have not been fortunate enough to meet her I've been luck enough to find this article about her. 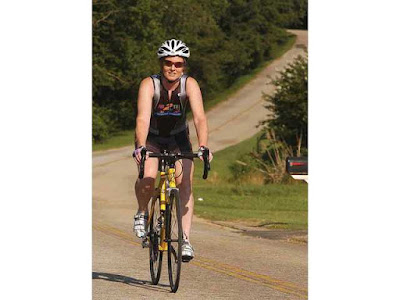 Please read and get inspired to overcome anything!

"Dave Larson will be carrying a big sign to show support and jumping up and down for his favorite athlete in Sunday’s Aflac Iron Girl triathlon at Lake Lanier Islands. Larson knows the potentially fatal health issues that his wife, Deneshia Larson, has overcome. Now he wants to celebrate as she tackles her first race with the swim, bike ride and run all tied together in this race designed solely for female competitors.

“I’m very proud of my wife,” Dave said. “She’s the kind of person that when she picks a goal, she goes after it.
“I just want to be as supportive of her as I can during the race.”

People take part in distance races for all kind of reasons. Some sign-up to celebrate the conquering of health issues. Some participate simply to stay in shape or improve on last year’s time, others to celebrate a milestone.

Still, Larson has to have one of the more remarkable stories. Doctors didn’t even know if she was going to live after she suffered from genetically inherited blood clots, which surfaced with scary symptoms while she was running in the spring of 2009.

Originally chalked up to stress, those symptoms couldn’t be ignored any longer after Larson almost passed out after running only about 50 yards near her home in North Hall one day. She scheduled a doctor’s appointment for the next day and was immediately hospitalized, doctors originally believing she may have suffered a heart attack.

It wasn’t a heart attack.

After almost a week in a hospital bed and a number of tests, including blood tests and chest X-rays, it was determined that her ailment was pulmonary embolism and deep vein thrombosis — blood clots in the legs and both lungs. Both of these conditions are potentially deadly and doctors told the Larsons she would not have survived had it not been for her good physical condition.

Now, just a little more than a year removed from a shaky prognosis, she’s been cleared compete in her first triathlon.

“I just want to be able to finish the race,” Larson said. “Being able to complete the race is very important.”

She will not be competing in the race alone. Her sister, Jessica Warren, will be making the drive up from Jacksonville, Fla. to be right by her sister in the race. Aside from a little friendly trash talk between the sisters about who will finish first, Larson’s younger sister is just glad she’s got this opportunity to be going through such a grueling event together.

“I feel really privileged to be able to do this with my sister,” Warren said. “It really scared me when it happened because she was in the hospital for about a week.

“I know it’s a miracle she survived.”

After a long period of uncertainty during which she was unable to do any athletic training, Larson was given a clean bill of health by her hematologist on Oct. 26 of last year. After taking blood thinners for six months to combat the blood clots, she is back to a normal lifestyle, except for relatively minor precautions she must follow: taking an aspirin every day, staying well hydrated and limiting Vitamin K intake.

Shortly after getting the go-ahead to start training, the Larsons saw the previous year’s Iron Girl event televised. Deneshia immediately gravitated to what the race had to offer and was drawn to sign up. However, she had to take it easy at first.

First it was baby steps running. Then she would run a mile. On race day, it will be a three-mile run that women have to complete on a moderately hilly course.

Now, as a pair, the Larsons train regularly to have Deneshia ready for the race this weekend. Her biggest worry going into the race is the 1/3-mile swimming portion, since she’s only been training for stamina in the water for a few months. As for running, the Larsons train a few days each week during their lunch break from their respective jobs in Alpharetta.

Training on the bicycle is probably the most thorough.

Now, it’s all come together for Larson, who has previously competed in a number of half marathons — 5Ks and 10Ks — with her husband.

“She’s been training hard for this race,” Warren said. “And I know she wants to be able to place too.” "

Be Thankful this week because we are able to experience come-backs like Deneshia's. Anything is possible once you get the bill of clean health like she did. Never ever lose the hope that you can come back.

Glad I could be an inspiration! The race went great. I'm really looking forward to doing another one sometime. I also rode in the Hotter 'N Hell 100 in Wichita Falls, TX last August and would definitely recommend it. Tough bike ride, but what a sense of accomplishment. I think this will be the year of my first full marathon! :)