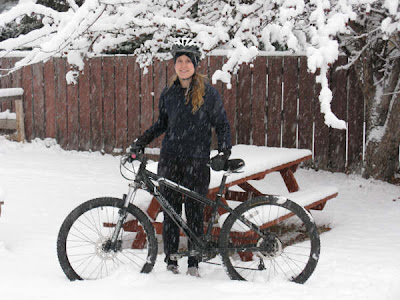 For this edition of Athlete of the Month we are going north of the border... Unfortunately, they have blood clots up there as well. But we don't want to talk about the bad here let's high light the good and have you meet a survivor and someone who can break you down on a bike... TARYN MONTGOMERY.

Thanks to the power of the web, she was able to find me and we have been in touch. Being noisy as I am I've asked her to tell me about her story and she has been kind enough to share with me and here I am sharing it with all of you...
"In November 2005, when I was 28 years old, I was diagnosed with my first dvt. I was articling at a large national law firm at the time and this diagnosis added even more stress to my already high stress life. After my diagnosis, I took Warfarin for 6 months. During this time, I became so afraid of the side effects of my medication (i.e. potential haemorhage) that I avoided most physical activities and my body fell into complete disrepair. When the 6 months was up, I couldn't run even a single kilometre and I was at least 15 lbs heavier than I should have been. However, getting off of the Warfarin gave me a new lease on life. I started to run again and quickly lost close to 20lbs. Even after my wedding (my other reason for getting fit), I continued to run and bike. I ran 10km races, half marathons, and finally, in December 2007, my first marathon.
My fitness goal for this year was to bike over 3000km (1900 miles). I am over halfway there. Unfortunately, last Monday I was diagnosed with another dvt. I was so upset. In one flash, I saw all of my fitness goals fall away. However, after taking some time to digest the fact that I am now facing a lifetime of anti-coagulant treatment, I have decided that I am not going to live the rest of my life in fear. After taking some time off to allow the swelling and pain to recede, I am now back on my bike (though I am not straining myself on account of the fact that the clot could still be jarred loose over the next 10 days or so). I intend to reach my goal this year (hopefully before the first snowfall) and I intend to do a triathlon and/or another marathon next year. It is also my goal to climb Mt. Kilimanjaro over the next two years. 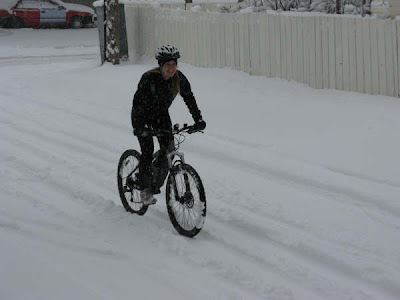 I understand that I have to be more careful now that I am on anti-coagulant therapy, but I don't have to let my medication run my life. I was wondering if there were other people out there in my situation and, thanks to your blog, I see that there are (e.g. Cheryl Edwards). This makes me feel like I am not alone in my desire to live life to its fullest in spite of my condition. It also gives me confidence that these activities can be carried out in a safe manner that does not significantly increase the likelihood of haemorhage."

Taryn wrote the story above around August and towards the end of November she wrote this follow up email to me that put a huge smile on my face...
"Just wanted to let you know that I reached my goal of 3000Km about three weeks ago. I was going to e-mail you right after, but then I thought, since the snow is not yet sticking to the ground, that I would try for a goal that would speak to you Imperial types. So, I went for 2000 miles and hit that on Tuesday. I have just passed 2008 (2008 miles in 2008 ;) ) and I think that I may be able to hit 3500km by the end of the year as the weather is still unseasonably warm." 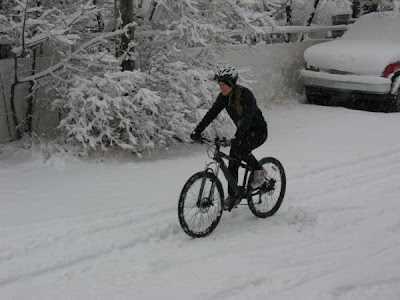 Not only she met her goal but put a little extra on top of it just in case! Unfortunately the snow arrived shortly thereafter and she was not able to ride outside any more and hit the 3500KM mark...

Reading Taryn's story gives me that additional push to get out and continue my training for the marathon coming up. I hope that her courage, discipline, desire, and caution drives some of you out there to get going on whatever is you want to do next. It does not have to be a marathon or 3000 Km on a bike or even a triathlon, whatever it is just get out and enjoy the beautiful world we have around us. You can return from your clotting episode and Taryn can be that inspiration that you can follow.
Thanks for reading,
The Clot Buster
Posted by Clot Buster at 2:51 PM