Mrs. Clot Buster is BACK!!! She is done with her PT and she can run until she feels some discomfort in the knee. Of course she needs to continue doing some maintenance exercises but nothing she could not do. I am very excited about that because for 10+ years now she is been my running partner. Of course we have a new member of the gang and all of running is a thing of beauty.
Next up cycling as a family will be next. We have a trailer for Junior and I am looking forward to the opportunity to get him in there and come out with us. I worry silly about him without a helmet so until then I will leave the trailer parked. It just not make sense to me to have me ride with a helmet and not have any protection for him while sitting there. I take any suggestions that you have for infant bike helmets... of course if they have polka-dots the better. 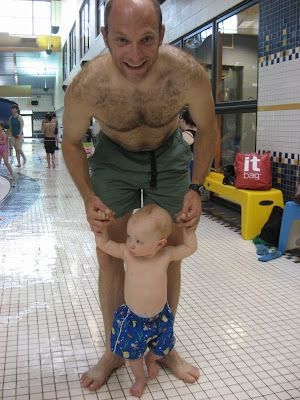 In the mean time, Junior has visited the pool a couple of times and he seems to grow in his enjoyment of the water. We can see a little more reaction everytime that we go. Soon enough he will be splashing around like it is his business... 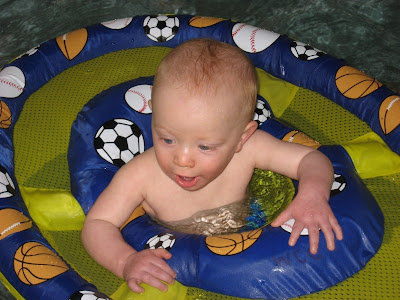 This is the time of the year where my legs are fatigued. Lots of base miles as I try to get in the best shape possible with the time that I have available these days. I am pleased to be able to keep up with the high intensity and watch my legs gets stronger. I am not in any kind of riding shape yet but I am working on that any chance that I get. My swimming is probably the one event getting the least amount of attention as I went from swimming two times per week to only once. But one thing is for sure I try to make that one time a quality one with plenty of flavor! 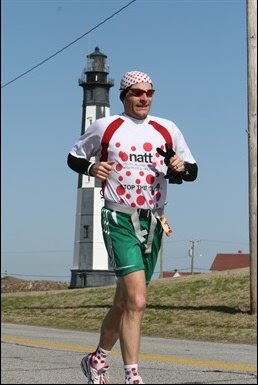 Love that the warm weather is finally upon us. Time for grilling, growing the garden, and be outside as much as I can. Just can't seem to get enough of the fresh air. I guess that working in an office building in a cubicle is not exactly for me but I am not sure I am brave enough to look into anything else right now.

I am sure by now you have heard of Steve Larsen's passing... what a sad, sad, news... I wish that I could have met him as I somehow identified with his style of racing. Don't ask me why or how but I always admired him. Hard to believe that he somehow was able to manage everything he had on his plate and continued to be the ace that he was. As a father now, I can only begin to imagine what his family is going through. Here is wishing them ALL THE BEST through this terrible time. Just makes you realize how short life can really be and how every day needs to be lived to the max regardless of what you are doing on a given day.
Thanks for reading,
The Clot Buster
Posted by Clot Buster at 7:12 PM 2 comments:

MAY Athlete of the Month

For the May edition of the CLOT BUSTER ATHLETE OF THE MONTH I am very pleased to introduce to you someone who has a story to share that I am sure will inspire you just like it has inspired me.

Please welcome JANINE SWIATKOWSKI as she shares with all of her thoughts on questions that I had the opportunity to ask her so please read on and get ready to be inspired because Janine can tell you that anything is possible if you put your mind to it...

1. What is your sport/activity of choice?
My sport/activity of choice is running half marathons. Also, I still snowboard. I enjoy running half marathons because I love to have a training goal in mind. If I just run for fun everyday, I wouldn't do it. When I'm training for a race and I have a training plan that tells me exactly what distance to run everyday. I love running because of the way it makes me feel. I feel free while running and it gives me the opportunity to listen to my music and think about life. I love snowboarding because I love the feeling of gliding
2. How did you get started in that sport?
I got started in running cross country in high school to stay in shape for basketball, as basketball was my sport of choice back then. I started running half marathons about 20 years ago. My first one was in Murrieta and my second was in Cabo San Lucas, Mexico. I got started snowboarding when my brother asked me if I ever wanted to try it. He's six years younger than me, but he, myself and my other younger brother, all grew up competing in sports together. So, we're very competitive. I thought if he could do it, I could do it.
3. What is the latest milestone you achieved or plan to achieve?
I ran the Disneyland Half Marathon in August 2008 and I'm training to compete in the Palos Verdes Half Marathon in May. I took some time off from racing, because I lost my job in August. 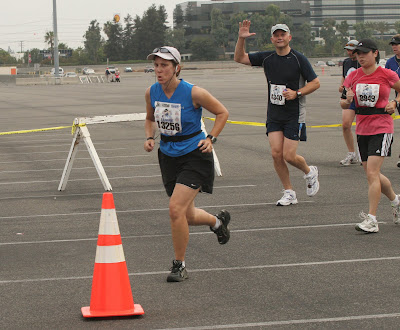 4. Tell us about your clotting episode Are you on blood thinners now? How long were you out of commission?
My clotting episode happened about three years ago. I was walking around and thought that I had a pulled calf muscle. I went to my Bible study one night and I was so uncomfortable with that leg. The next day I called the doctor for an appointment. When I got there, the nurse's eyes got very big and she kept saying, "DVT." The doctor arranged an ultrasound and it was confirmed that I had a DVT. I also had a pulmonary embolism (PE) that was confirmed by a lung scan in Nuclear Medicine. I had never been to Nuclear Medicine before, so I was a bit frightened by the whole experience. They sent me to the ER and it took six hours for me to get admitted to the hospital. I spent the night in the hospital and was discharged the next afternoon. I had never been in the hospital before, so it was an interesting experience. When I was discharged, they failed to mention that I needed to be on bed rest for the next five days and that I was to limit my intake of Vitamin K foods. My doctor was furious when she found that out. I was prescribed Coumadin for life as I found out that I have Factor II genetic clotting disorder. My mom has Factor V and Factor II.I was probably out of commission for a few weeks or so. The folks at work were a bit freaked out as I am such a healthy and active person that ran and played soccer regularly. Needless to say, my soccer-playing days were cut short due to my daily intake of Coumadin.
5. When were you able to get back into your activity? How did it feel that first time?
Since I wasn't allowed to play soccer anymore, I had to do something to stay in shape and get active again. I decided to resume my running training. I don't recall how long it took me to get back. I would say it might have been a few months or so. My lungs felt kind of rusty and I felt out of shape. 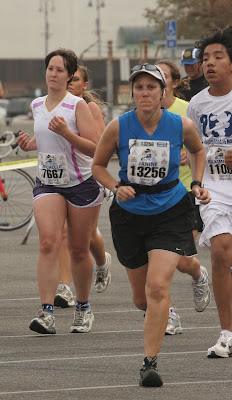 6. What is your favorite piece of gear for your favorite activity?
I'm loyal to my Asics running shoes and I love my IPhone for being able to listen to my music on ITunes and I love MapMyRun for IPhone. It allows me to keep track of my routes using GPS.
7. How much are you getting out doing your sport?
When I'm training for a race, I'll work out five days a week. When I'm not training for a race, it's probably more like three or four days.
8. What is your favorite food? Either generally or after a workout.
I love to cook and try new recipes. But, I'd have to say that I'm partial to a great steak on the grill, a loaded baked potato and a crisp, fresh salad. 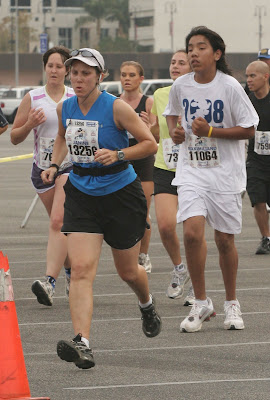 9. If you could go some place to visit and explore, where would like to go?
I would love to go to Australia and Africa. I am a photographer by trade, so I've always wanted to go on an African safari. Someday...
10. What would like to say to someone who is going through a clotting episode, perhaps very similar to yours? How can people return to do what they enjoy? Tells about your concerns and what you look out after as you got back.
I would say that you need to listen to your doctor first and your body second. You're going to need to take your time and let your body adjust. You'll have to have patience, but in the long run, it will be the best thing for your body, because I feel that getting back to an active activity will improve your circulation. Also, it improves my mental state and keeps me happy.
Janine MANY THANKS for your willingness to share your story with all of us. We look forward to hear how the Palos Verdes Half-Marathon goes for you. GOOD LUCK!!!
Thanks for reading,
The Clot Buster
Posted by Clot Buster at 7:43 PM No comments:

Now I am really confused... 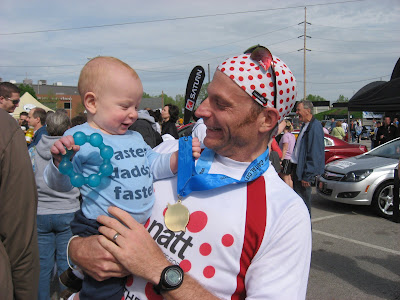 So, can I count running my BEST EVER HALF-MARATHON RACE in a race that I was not even signed up for...?
New PR for the Clot Buster at the Half-Marathon distance... 1:32.56 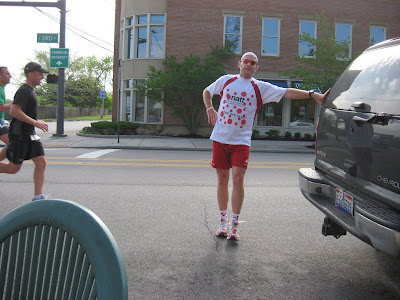 I am simply stunned that I was able to pull this off. Mrs. Clot Buster sure looks good in the results page with this blazing time... I even stopped to get my pictures taken by Mrs. Clot Buster who was watching the race go by in the outdoor sitting area of a coffee shop while Junior ate his apple suace... I was so fast that I had to stop to let her take my picture. I have no idea where that race came from. I am just pleased that the speed work that I've been doing helped me to get a whole minute + faster... 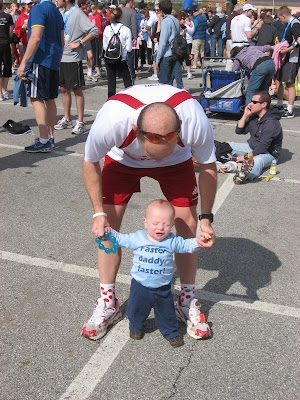 Today's run did not feel so good so I am paying the prize...

So, from here on out Mrs. Clot Buster will be registering for all of my races... I need every advantage that I can get...
Thanks for reading,
The Clot Buster
Posted by Clot Buster at 7:01 PM 1 comment: