May Athlete of the Month

At last the weather around here is finally turning.  Fortunately we are leaving the winter behind and facing some more reasonable weather.  Soon enough some of us will be attempting what April's Athlete of the Month enjoys in water skiing.  I am still waiting for an invitation for a private lesson...

But if water sports is not your thing then how about some spring/summer travel...?

I am asking because this month's Athlete of the Month is from a place from on earth I would love to visit someday...

Do you have a guess? Well, how could you really if I did not provide you with any hints... That is why you will need read below to find out.

Once again, the far reaching power of the internet has giving me the opportunity to get in touch with an another blood clot survivor who is making a remarkable come back at one of the most breathtaking places on earth.  Please allow me to introduce you to ADAM WALLER who is May's Athlete of the Month.

Please read on and enjoy his story and his journey... I want to go to where is and get to run where is running...

THANK YOU ADAM for your willingness to share your story with our growing community of blood clot survivors.  All of the stories continue to inspire me and others everyday!

"1)   What is you sport/activity of choice? Why do you enjoy it?
I would say I’m a soccer player-turned-cyclist-turned-runner! I have played football, or soccer, since I was 5 years old and I continue to do so at the age of 27. I took up road cycling at the age of 24 and long-distance running at the age of 26. For me, my heart will always be with soccer but I perhaps get the most enjoyment out of road cycling. I love the cathartic nature of the sport, and the suffering you put yourself through to get better.  I found it a great release at the end of a stressful week at work. The scenery also helps! I saw more of my native North East England than I ever dreamed of.
2)  How did you get started in that sport?
In road cycling, I think it started when I watched the 2011 Tour de France. I really got into the sport, and I loved the toughness of the riders. A mutual friend of mine rode for a local cycling club, so I joined and it took off from there. I started as someone who could barely do 20 miles without feeling like climbing off my bike, to someone who was the equal of people who had been riding for years. I learnt a lot from a lot of good cyclists, and by 2013 I was the strongest I’d ever been. I moved into running because of a location change. I am a school teacher by profession, and I had an offer to move from my hometown of Hartlepool, England to Arusha, Tanzania to teach in an international school. Unfortunately, it isn’t very conducive to road cycling but I met some fellow teachers who ran 3 mornings a week. It started from there. 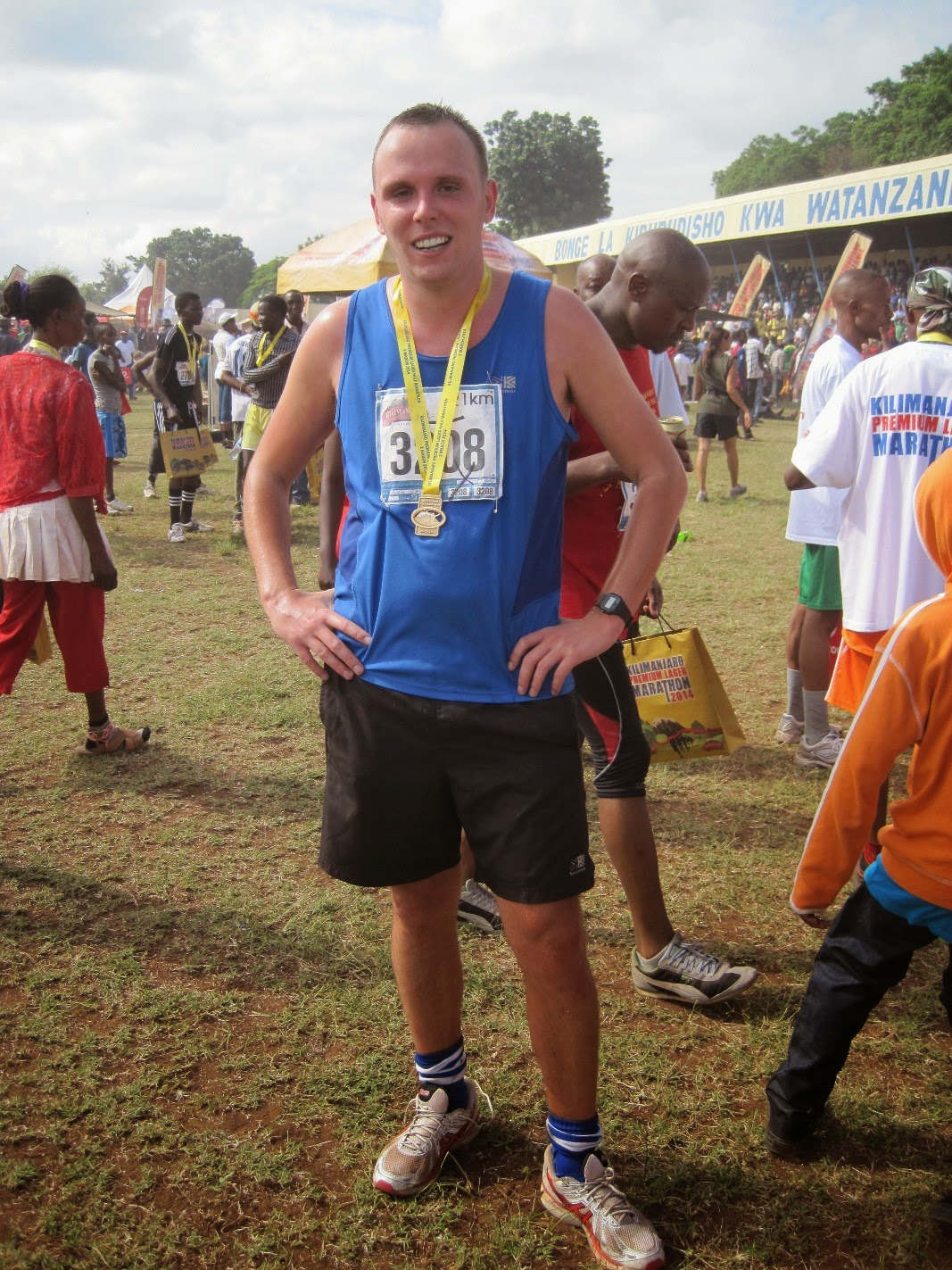 )  What is the latest milestone you achieved or plan to achieve?
I ran the 2014 Kilimanjaro half-marathon, so that was a great achievement especially since it was my first half-marathon. The course is very tough – the first 10KM is basically all uphill. I perhaps hadn’t trained as hard as I could have, but I still completed the course in 2 hours 19 minutes.  To be honest, my goal at the start was just to finish without walking! I absolutely loved the feeling afterwards and I can’t wait to do it again. I want to do it again next year and break 2 hours, so I’m already putting together a training plan. My next goal is to complete the 17 mile route of the Osmotherley Phoenix, an event that takes place in North Yorkshire in July. It’s a run/walk across moorland and hills. It promises to be tough.


4)  Tells about your clotting episode.  Are you on blood thinners now? How long were you out of commission?
Last year I had a number of cycling challenges I wanted to complete. The first one was to cycle up El Teide in Tenerife, the highest continue climb in Europe. It’s where Team Sky train. I completed that in February of 2013, and it was very hard but amazing. The second was an event in May called the Wooler Wheel, a cycling challenge in the Northumberland region of England. It is a very difficult course and mental strength was so important, but I completed the 70 mile route. Afterwards, I went for a few beers and drove the 2 and a half hours home. A few days later I had a very sharp pain in my right calf. I thought I’d just pulled a muscle but it got worse and worse. My calf felt rock hard.  I went to a physio at the local hospital who diagnosed a torn calf muscle. A setback for the cycling, but I was told I’d be back on the bike in four weeks. I flew to New York and back the week after to visit friends. In this time, my calf actually seemed to have gotten bigger and was still painful. I went back to the hospital to be told it was actually a DVT. I was shocked – I thought those only happened to old people or after long-haul flights. I was on Warfarin for 5 months, and had to deal with the transition of moving from the UK to Tanzania and all the medical stuff that comes with it.


5)  When were you able to get back into your activity?  How did it feel that first time?
Cycling wise, within 5-6 weeks. I did struggle for a month or so after however. I think the inactivity didn’t help, but I kept on getting shooting pains up my right leg and into my right shoulder. A doctor told me it was more than likely related to the clot. By the end of the summer I was flying again, which was great. Running was another story. I tried to play football around month after and I lasted a grand total of 6 minutes. At that point I was petrified I would never be able to run around again. It was at that point I found ClotBusters, and it really made feel positive because I knew it would get better. 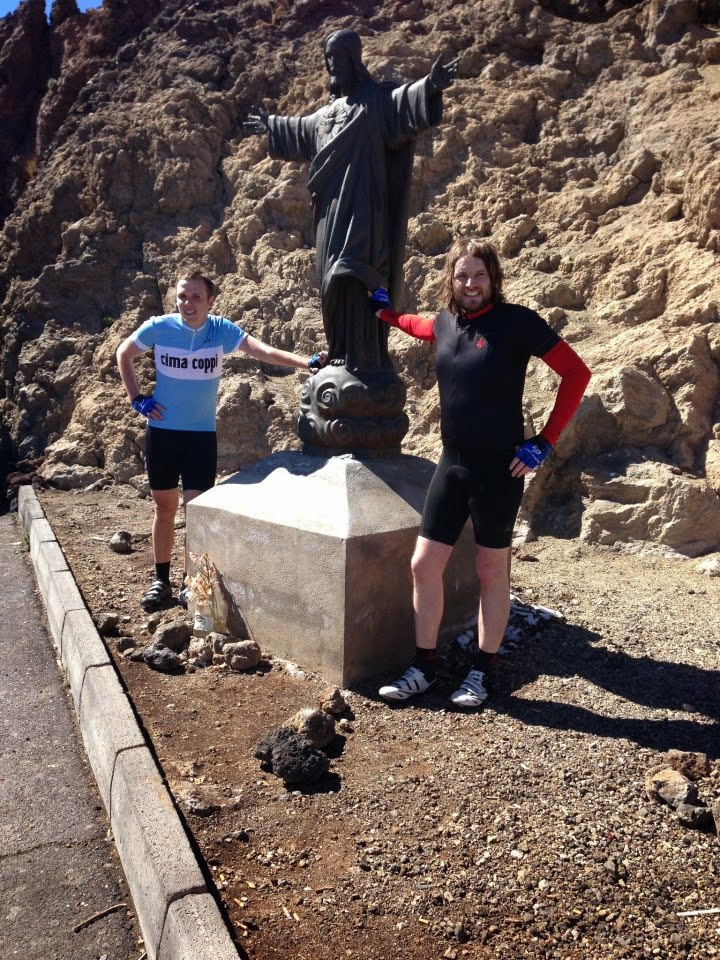 6)  What is your favorite piece of gear for your favorite activity? (Bike brand, running shoes, perhaps a running singlet or the Clot Buster's Running Polka-Dot Technical Shirt...)
My bicycle! It’s a full carbon Focus Cayo and I love it to bits. It’s currently in storage, but it’ll be with me for a good while. For running, you can’t beat a pair of shorts that don’t chafe. I have a pair of Karrimor shorts that feel like silk!


7)  How much are you getting out doing you sport?  (Everyday you do some training, 2, 3, 4 times per week)
I play football at least once a week. I go out running around 3 times a week, mixing up speed work with long-distance runs. I’m going to increase it to 4 times a week next month.


8)   What is your favorite food?  Either generally or after a workout.  For me there is nothing better than a Chipotle Burrito...
That’s a tough one. I love a full English breakfast, but they’re not good for the waist line! We have a dish in my area of England called Panackelty. It’s a corned beef and potato stew, with added onions, carrots and dumplings. It’s the thing I miss most about being out in Tanzania, behind family of course!

9)  If you could go some place to visit and explore, where would like to go?
I’d love to travel South America, particularly Colombia. Not only have I heard it’s beautiful, but I’d love to ride out there.

10)  What would like to say to someone who is going through a clotting episode, perhaps very similar to yours?  How can people return to do what they enjoy? Tells about your concerns and what you look out after as you got back.*
The best advice I can give is ‘This too shall pass.’ It takes time, but now I’m fit and healthy. When it first happened, even after the second month, I never thought I’d be at the stage I’m at now. It was a slow process, but I got there in the end. I do worry about getting another DVT – they could find no cause for my first one, but I have been told I’ll be on blood thinners for life if it happens again. The pain of getting bloods taken every couple of weeks is something I never want to go through again."

Who wants to come with me to do the Kilimanjaro Half-Marathon?!?!? How amazing would that be?

So, we learned here of a blood clot survivor who is originally from England but resides in Tanzania... I would never ever would have considered that possibility.  But I LOVE IT because we are reaching far and wide.  I am over the moon knowing that Adam is returning to do what he loves and pushing the boundaries for other challenges.  Blood clots are not stopping him not even slowing him down.

I am looking forward to hear where he goes next.  Perhaps some day we can meet and either run together or play some football together which is also my start in sport.  I am sure Adam would be able to teach a thing or two from his experience...

Get inspired and get out there to do what you enjoy.  It may be slow at first but as you can see here it is possible!