Wow... It has been an eventful couple of last weeks... I am glad those are behind me.

Something you may learn about me is that I HATE HOSPITALS... I've been very fortunate to stay away from them and only go when absolutely necessary... like the birth of my 3 boys or emergencies with my kids... But having 3 boys I am afraid that the emergency kind of visits maybe more frequent... I HOPE that they are not but I sense that because they are boys this is inevitable... Wish me luck down the road...Yikes!

But since WE ARE ALL VERY LUCKY to see the sunrise every morning we have arrived to April 2017...

And because it is a new month WE ARE AGAIN VERY LUCKY to have found a willing Blood Clot Survivor who has been kind enough to share her story of overcoming the challenges of blood clots with all of us.

As we are heading into the beauty of spring please allow me introduce to you our April Athlete of the Month - ELIZABETH DiNOVIS.  Without a doubt her personal account of her clotting incident and her determination to overcome the challenges of clotting will inspire you to battle just like she is as she is getting ready to throw down with her first 5K Run since her diagnosis... It has been a long road to travel but Elizabeth is ready to take it on in her very own CLOT BUSTER #StopTheClot polka-dots...! 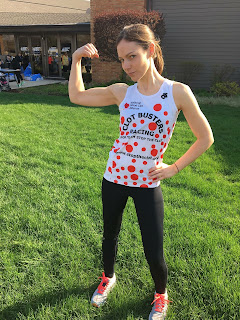 1) What is you sport/activity of choice? Why do you enjoy it?
I have always loved running because it feels so freeing and is such a great stress reliever.  The fact that you can really track your progress and are able to run just about anywhere is a great bonus! I also appreciate that it can be both an individual and team sport.

2) How did you get started in that sport?
I ran cross country and track in high school.

3) What is the latest milestone you achieved or plan to achieve?
I am running my first 5k since my blood clot diagnosis in 2010 on April 15th!

4)  Tells about your clotting episode.  Are you on blood thinners now? How long were you out of commission?
In February 2010, while living abroad in Ecuador, I woke up to my left leg being so swollen that it was hard as a rock and felt like a dead limb.  I could not even lift my leg.  I was hospitalized that morning and diagnosed with deep vein thrombosis.  In retrospect, I began to have symptoms 3 or 4 days beforehand, and had even been given an anti-inflammatory shot earlier in the week as the doctor thought my symptoms were related to the sciatic nerve that had been bothering me for a few months.

Initially manifesting as an ache in my groin and progressing to me having trouble walking up steps, my symptoms continued and the night before I was hospitalized my calf began to swell.  I was an active 23-year-old, so I also originally thought that it might be a pulled groin muscle or the effects of a running workout I had completed recently.  I was not familiar with the symptoms associated with a blood clot and that was not anywhere on my radar.  After a week in the hospital, I was sent home but I was not able to stand on my leg and it took almost 2 months for me to be able to regain my mobility.  I was taking coumadin, and about a month after my hospitalization noticed that my fingers were bruising.  The lab work initially came back incorrectly and it turned out that I was severely over anticoagulated.  I was immediately admitted to the hospital where I was given fresh frozen plasma in order to regulate my bloodwork and to avoid any risks of internal bleeding.  The entire experience was physically and mentally exhausting.  I stayed on coumadin for 8 months initially.

After moving back to the United States in 2011, I was diagnosed with May-Thurner syndrome, which is when the right iliac artery compresses the left iliac vein, and had two stents placed in my iliac vein to help keep it open.  While this was a step in the right direction and relieved some of the extreme swelling and discomfort I was still experiencing, it did not fully alleviate the issue by any means.  I wore full pantyhose compression stocking daily and was unable to run for more than a few minutes at a time.  After the stent placement, I took warfarin for 1 year and then was taken off the medication and switched to a daily aspirin.

In 2013, my stents occluded due to new blood clots and I began taking warfarin again.  The vascular surgeon I saw after the occlusion did not want to touch the clot because he was afraid of causing a pulmonary embolism and we weren’t sure exactly at what point it had formed over the last year.  In 2015, I tried a procedure at another hospital where they placed a temporary IVC filter and attempted to open up the blocked stents.  They were unable to push through the clot and scar tissue.  I was SO disappointed.  A few months later I found an interventional radiologist who had access to a PowerWire which uses radiofrequency to recanalize vein occlusions.  So cool! AND IT WORKED!  He was also able to place 2 mores stents.  Before the procedure, he had also added Plavix and aspirin to my warfarin regimen.  However, at a follow up appointment it seemed that my body was resistant to the Plavix and there was already narrowing of the stents.  I was immediately switched to Effient, a different antiplatelet, and scheduled for another angioplasty and stent placement.  I now have 6 stents in my left leg and continue to have angioplasties due to restenosis.  I still take warfarin, aspirin and Effient daily.

To sum it up: Unfortunately, the blood clot in my groin has affected my entire left leg and did not resolve, leaving me not only with physical pain and discomfort such as swelling, heaviness and varicose veins, (a chronic condition known as post-thrombotic syndrome), but also emotionally exhausted as I tried to adjust to this new reality and reduced quality of life.  Since then I've been through 7 years of ultrasounds, CT scans, venograms and MRIs; more doctor appointments, blood draws, medications and tears than I can possibly count; 6 stents, 5 procedures, 1 temporary IVC filter; and a diagnosis of May-Thurner syndrome.  I'm still waiting for drug eluting balloons applicable to the femoral vein to hit the market which I'm hoping will continue to improve my condition.  There are definitely more procedures in my future, but I'm SO grateful to have progressed to this point! 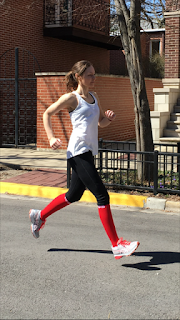 5) When were you able to get back into your activity?  How did it feel that first time?
I went on a few runs in 2015 after the 6th stent was placed and it felt so good to get out there and sweat!  However, it really wasn’t until a few months ago that I seriously began considering running a 5k.  Now it feels amazing to build up endurance and gain a little (very little! haha) bit of speed.  I’m hoping to keep training and really improve following this first 5k next weekend.

6)  What is your favorite piece of gear for your favorite activity?
I have always loved Asics running shoes 😊  I also wear compression stocking when I run which truly help!

7)  How much are you getting out doing your sport?
Right now, I am in graduate school so I am trying to run 3 days a week.

8)   What is your favorite food?  Either generally or after a workout.
I actually really love grilled vegetables or a roasted red pepper and garlic pizza!

9)  If you could go some place to visit and explore, where would you like to go?
I would love to visit somewhere in Asia one day.

10)  What would like to say to someone who is going through a clotting episode, perhaps very similar to yours?  How can people return to do what they enjoy? Tells about your concerns and what you look out after as you got back.
I think it is incredibly important to be your own advocate and to keep searching until you find a doctor willing to work with you in your recovery.  I have been to many, many doctors and it has been a process to find the right fit.  Educating myself about my condition and staying up-to-date on the latest innovations in the field helped me to better understand my diagnosis and the possibilities for improving it.  I also found a great deal of comfort in reading about other people’s experiences via the National Blood Clot Alliance’s website and connecting with other people who have experienced blood clots at their Stop The Clot events or via online platforms and support groups for survivors of venous thromboembolism.  I had a lot of anxiety and panic attacks for quite a long time due to my fear of another blood clot diagnosis.  Once the second diagnosis happened I think it was my worst fear being realized, so from there it was about climbing out of that place and trying to take as much control over my situation as I could.  I’m also a big advocate of counseling to provide an outlet to express the emotional toll that a blood clot diagnosis takes on patients and their families.  Managing a chronic condition is difficult and it’s important to get yourself the support you need! I also LOVE using an aqua jogger which helped me to run in the pool while I was unable to run on land. (Shout out to my mom for that one!)

THANK YOU SO MUCH Elizabeth for sharing your story!

I can't wait to see pictures of you rocking and finishing that 5K this coming weekend while you wear the CLOT BUSTER #StopTheClot polka-dots... Wear them proudly because you have earned them!

Next Saturday ENJOY THE SWEET PAIN OF YOUR ACCOMPLISHMENT because it is just the beginning of your comeback!