May the new year bring you all of the HAPPINESS, GOOD HEALTH, and GOOD FORTUNE you can handle!!!

2009 should be another great year for the Clot Buster and everything we are trying to do in order to spread the word about blood clots and blood clotting disorders.

THANK YOU a thousand times over for stopping by in 2008 and read about what I am doing. It has been great fun yet again this year.

HAVE A WONDERFUL Holiday Season! 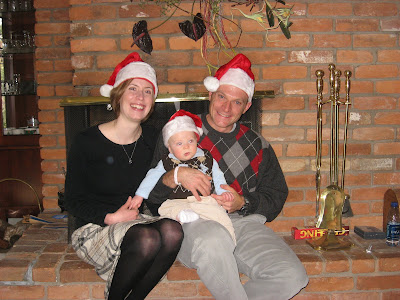 To all The Clot Buster Family wishes the VERY BEST in this Holiday Season! 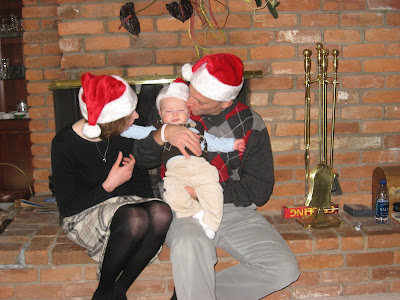 We wish for the new year to bring you all the Happiness, Good Health, and Good Fortune you can handle.

We look forward for the new year and the challenges ahead as we continue to spread the word about blood clots and blood clotting disorders... STOP THE CLOT!!!

Posted by Clot Buster at 8:01 AM No comments: 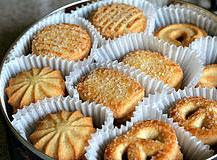 One of the treats of the this festive season is having the chance to eat things that normally I don't get to eat... Danish Butter Cookies are one of those foods... I LOVE those darn little cookies, espcially when I get to put some Nutella and/or some sort of jam on them... wow!

Of course I have to earn the right to enjoy these and there is no better way than training for a marathon. I have to say that over the last two weekends I earned my right to eat half of a giant can... well not really that much but enough to enjoy every bite I had with a nice cup coffee.
Last weekend I ran a total of 26.5 Miles broken down on a track workout for 5.5 Miles, a short tempo run of 6 Miles and finally a long of 15 Miles on Saturday. This week, I was able to hammer out a track workout of 5.0 Miles, with a tempo run of 5 Miles and a long of 17 Miles... of course it did not end up exactly that way... the short tempo run was actually 2 Miles and the long run I hammered out yesterday and it ended up being 20 Miles!
Rough going with wind and rain throughout the entire run not the best planning on my part... but I survived. Also, it is worth mentioning that I ran from work to home... ALL 20 Miles of it!!! 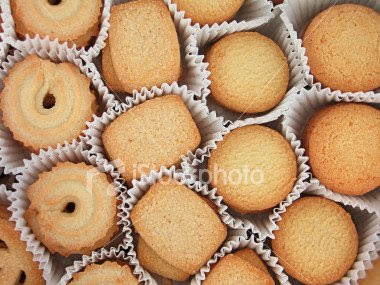 Enjoy those Danish Butter Cookies but make sure you earn them!

Thanks for reading,
The Clot Buster
Posted by Clot Buster at 7:48 AM 1 comment:

December Athlete of the Month

It is hard for me to believe that this month's athlete of the month is someone who came down with blood clots a year ago last December...

If you were to see him around on his daily activities you would never think that he has protein C defficiency and therefore more prone to suffer from blood clots.
Please sit back and read on what I was able to learn about this MACHINE of an Athlete whose name is JOHN VERHEUL. Without a question another inpiring character that can help to drive and motivate the Clot Buster Nation on our continous quest to come back and rebound from a clotting episode as we chase all of our dreams and goals.
Below you will find a question and answer sequence I was able to have with John not too long ago... 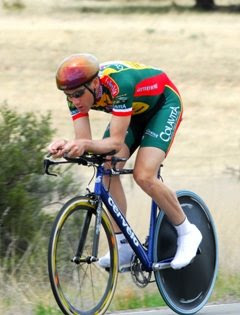 Would you provide more detail for me about your story and all of the racing you do?
2008 was my 22nd year racing, the focus was on timed events instead of mass-start due to the anticoagulation meds and the safety issue. In mass-start racing (road, criterium, etc), it's more a matter of when you will crash, not if. That's normally not a big deal, except if you're on anticoagulants...in which case when you crash there's a serious risk of death. Anyway, I race primarily road, criterium, cyclo-cross, time trials...I've done some track and mtb, but probably fewer than 20 of each of those (out of a total of probably >1000 starts over 22 years).
(...the protein C defficiency) didn't get diagnosed in me until I clotted up (multiple clots in my lower leg) after a race last December. Fortunately my doctor is a personal friend (so he got me right in) as well as an athlete himself (so he understands about endurance athletes), and he sent me to get an ultrasound as a first course of action. He actually thought the swelling miht be compartment syndrome, but was covering his bases with the ultrasound.So then 2 weeks of lovenox injections twice daily, followed by the warfarin that I'm still on. I had to fly to cyclo-cross nationals while I was still injecting myself with the lovenox, it was interesting to have to do that in a hotel room with the team that I was coaching. It did suck to not be able to race myself, but racing's been mostly a hobby for a long time, coaching is my job. 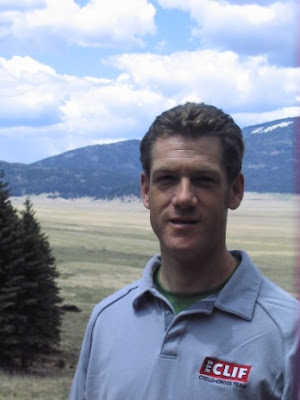 How did you feel after the clot? How long did it take for your to shake off the shock of having clots discovered?
Having been an athlete pretty much all my life, I got over the shock pretty easily. I just treat it as another injury (athletes get injuries, we have to deal with them), and focus on what I need to do to "get better". Given that I'd already decided to go to law school this fall, I knew my career as a competitor was going to kind of end, so this just brought that end a little closer. I'm 41 this year, and it gets a little tougher each year to compete with younger athetes anyway.
Do you have any special inspiration to keep you at it?
Well, right now it's a bit different for me to continue to ride/train, when really I don't know that I'll race again. Racing has been the motivation for training over the last few decades, and now the focus shifts to using cycling as exercise for health and stress release. Frankly I'd prefer to mix in other sports, but many of them (running, basketball, soccer, etc) have been ruled out do to a back injury. But in my first 4 weeks of school I've managed to ride 6-8 hours per week, which I think is good for just staying healthy. It's a different mindset though, exercising to be healthy instead of to win races.
What is your favorite food?
My wife would list (for me) cinnamon rolls and beer. 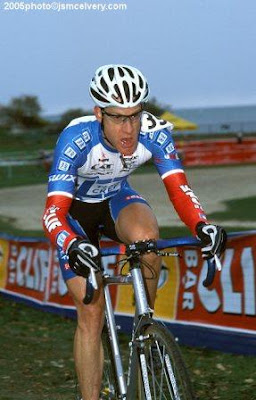 What is your absolute favorite piece of gear you love to use?
I'm not really a "gear" guy, to me the stuff we use is a tool that enables us to do what we do. That said, probably the most important piece of gear I have is a powermeter, the most advantageous piece of gear is my Trek TT bike, and my favorite is my brand new JBV Coaching clothing (that's my company).
John, THANK SO MUCH for being an inspiraton! I am going to need to get some tips from you to get better with my cycling so that I can improve on my times for upcoming races. You know there is nothing better than seeing the Clot Buster Polka-Dots flying on a race course!
GOOD LUCK IN LAW SCHOOL!!!
Thanks for Reading,
The Clot Buster
Posted by Clot Buster at 7:09 PM 1 comment: 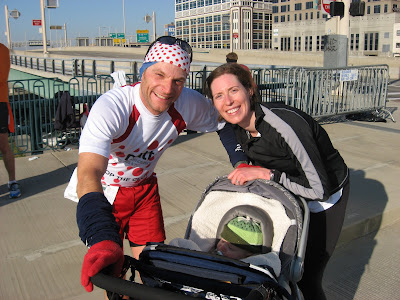 Another fantastic running of the Thanksgiving Day Race for the Clot Buster Family...

10th Running for Mrs. and Mr. Clot Buster
1st Running for Clot Buster Junior... well, unoficially his second as last year he was alredy in "the oven" when the race took place. 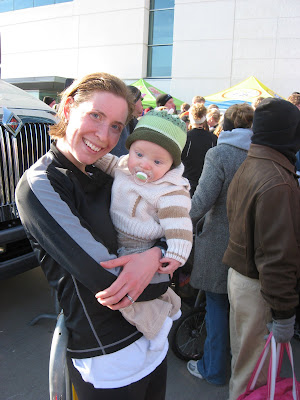 For the Clot Buster clan we stopped the clock at a very respectable 48:43 with Junior crossing the finish line ahead of us. I really tried to beat him but I just could not get around him... 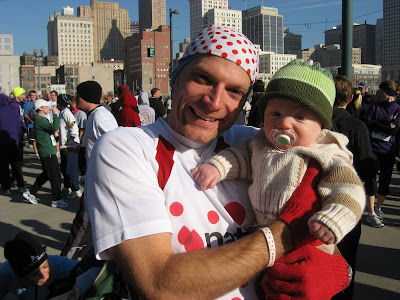 It was an incredible experience to race together the entire way and cross the finish line together. We don't get to do it very often since racing together is not always an option. But this time it was and for our 10th time doing this race for sure was special. 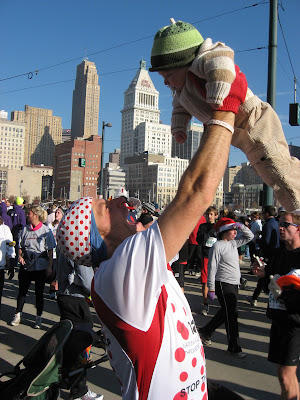 As you can see the polka-dots were once again out if full force spreading the word about blood clots and blood clotting disorders... I am not sure if this time around I was getting strange looks because of the polka-dots or because I was passing people while pushing the stroller... I did not have time to ask.

The marathon training is coming along... freezing is actually the word I would use... can I get a break in which I could have a day to run outside above 32 degrees... that would be so nice...
Tomorrow, I have 13.1 Miles to do and a high for the day of 28 degrees here. Are you kidding me?!?!?
Thanks for reading,
The Clot Buster
Posted by Clot Buster at 2:00 PM No comments: