March Athlete of the Month

Did you know that March was DVT/BLOOD CLOT Awareness Month?

Without a question a very important month in the fight against blood clots and blood clotting disorders.

Because it is such an important month it is appropriate that March's Athlete of the Month be someone who has a remarkable story and participates in the highest HIGHEST level of her sport.  I want to make sure that I clarify that to me every story of a comeback from a clotting incident is remarkable and inspiring from the weekend warrior to the high paid professional.  However, in this month's edition of this blog post we are going with someone who is very familiar with five little rings normally on a white background and that only come along every 4 years...

Please allow me to introduce to you... 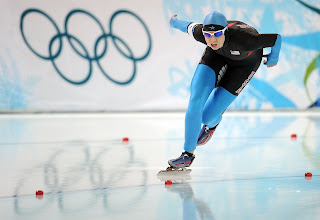 Although I wish that it was under different circumstances that I get to meet an athlete of this status I am blown away that the common cause of creating awareness against blood clots and blood clotting disorders brought us to cross paths and meet virtually.

As you will read below you will find Rebekah's story truly remarkable and inspiring.  If I could only have 2% of the intensity that this lady has my Clot Buster polka-dots would move faster during the races...

There is not much more than I can add to Rebekah's story.  On this is for sure CLOT BUSTER NATION will be rooting loud for her as she continues her journey to qualify and compete in the 2014 Winter Games.

Read on and get inspired...


"Hello!  My name is Rebekah Bradford Plath and I want to share a little bit about my experience of blood clots.  I suppose I should start further back than starting with my ER visit in September 2012.  I competed in the Vancouver 2010 Olympic Games in the Long Track 1000m event respectfully placing 29th for the USA.  I earned this spot through a reskate from an unexpected fall.  Here is a link recapping that moment: http://www.beyondtheultimate.org/athletes/Rebekah-Bradford.aspx.  I’ve learned to always stand up after you fall and to let God be God.  See if I didn’t respond to God that day how I did, I would have never met my husband.  I love telling people that he bought me on an auction for charity.  Here is the story of how we met:  http://plathandbradford.ourwedding.com/view/6573432571233947/6141689


It was the year after the Vancouver Games and training began.  I was strong and full of confidence after the Olympic year.  I was making strides in my skating that I had a hard time believing.  Frustratingly enough, I felt I progressively got slower throughout the competitive season and didn’t know why.


Two years after the Games, we hit it hard again at training.  Determined to get that feeling I had the year before, I felt I couldn’t push my body in the same way.  One day I remember I had an awesome morning training session.  In the afternoon, we had skating and upsettingly I couldn’t even crossover!  After a few months of doctor’s opinions, it was decided that I needs a bilateral knee surgery for full-blown arthritis!  See I was to the point in my training where I couldn’t even bring laundry up the stairs without intense pain.  My doc said if I didn’t get the surgery I would be looking at a total knee replacement in only a few years.  I would be out the whole season.


In April 2012, I found myself with a new team, new training program, finishing up my college degree, planning a wedding and preparing to move.  I had a lot of pain in my legs, but my knees were sore too.  I cannot tell you how many ice baths I took after to practice to cope with the swelling in my legs.  Not to mention that I was training high volume and felt like I was gaining a bunch of weight!  Definitely not how a bride wants to feel when they are one month away from their wedding day!  It really didn’t make sense.


Summer training was awful for me.  I didn’t want to admit to anyone that I wasn’t recovering properly and was in pain all the time.  That’s what athletes do.  We are a tough breed.  And I felt like I had something to prove after my knee surgery.  Again, every week I felt myself getting weaker.  I found it strange that I was having breathing issues and would be out of breath just after driving my car anywhere. I chalked it up as asthma and back problems.


In August 2012, I was playing Ultimate Frisbee with some friends, and collided with one pretty hard.  I had immediate pain and quietly told my husband to take me home.  It felt like I had a rib out and couldn’t take a full breath.  I had a few adjustments, but that only made it worst.  One doctor diagnosed me with an inflamed nerve, which would explain my radicular pain.  It didn’t.  That month was spent in pain that I could not explain.


The Friday (September 2012) before my ER visit, I went to get a second opinion and had a MRI.  I have never felt so weak in my life.  That doctor frantically called me Monday morning and told me he already phoned in a pulmonary specialist for me.  He found something in my lung.  I spent that day trying to make phone calls and arrange appointments, but had no success.  Towards the end of the day, I had a fever, my feet were cold and I could barely feel them.  Whenever I wanted to go somewhere, I found myself having to either use the wall or crawl to get there.  I resolved to lie on the floor and curl up with a wedding photo.  And that’s where my husband found me and told me to get into the car.  We were going to the hospital.


I was diagnosed with a bilateral pulmonary embolism and part of my lung infracted.  The intense pain I felt after playing Frisbee was a blood clot that burst and bleed around my ribcage.  The ER doctor said I was lucky my husband brought me in when he did.  If I made it through the night, it would have been rough one.  I remember being curled up in the fetal position at the bottom of the hospital bed with my heart rate at 130 and surprised that the morphine barely took the edge off of the pain.


I had to face the reality that I would be out for the 2012-2013 season as well.  But more importantly, how does one regain lung health?


As my husband and I were anticipating the answer of why the blood clots occurred, we were really hoping it was from the knee surgery.  It was odd that I would have a delayed reaction, but it was still within that one-year period.  I was devastated to learn that I have the Factor V Leiden gene.  And what saddened me more was that the gene triggered when I started birth control a few months before my wedding day.


Talk about a game changer. Although, it was a relief to finally have answers.


I was on a three month prescribed therapy of blood thinners and I was determined to not let this setback define me.  The first month was rather traumatizing.  We agreed with my doctor to have the Lovenox shots twice daily for a month.  My wonderful newlywed husband (and a friend who is a nurse) faithfully administered these painful injections. The last two months was a “breeze” with the Warfarin.


At first, my training involved walking from the car to the rink, sit down.  Then from the bleachers to the bike and slowly spin for 20 minutes.  Go home and nap 4-5 hours.  I gradually was able to train to the point where I felt confident enough to skate.  See there is the fear of being cut and bleeding, but impact was the main concern.  I wore a helmet to protect my head and had to be careful to not fall on the ice.


Three and a half months following my pulmonary embolism, I competed in the US Championships.  I placed 6th overall in the Sprint competition and 11th place in the 1500m.  In all my races, I was 1-2 seconds away from my personal best.


It is now four months after my ER visit.  I know I still have clots in my lungs and the blood around my rib is slowly breaking away.  My coaches and I have been wise as when to rest and when to train hard.  I am very hopeful in my recovery not only in skating but also more importantly in life.  My goals are simple:  Get healthy.  And to enjoy the gift of sport.  And hopefully qualify for a second Olympic team in Sochi, Russia.


Knowing that the cause of the blood clots is genetic, my husband and I are very aware of all the precautionary steps.  Like I said before, I will not let my PE define me.  We plan on exploring the world together and having children.  The path of achieving that will just look a little differently than that of other couples. 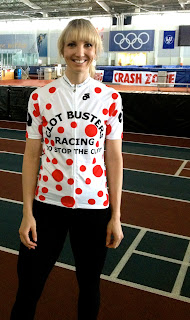 Incredible story... and she makes the polka-dots look fabulous!

THANKFULLY they were able to make it to the ER on time and start treatments when they did.

CLOT BUSTER NATION now has an Olympian to look after and cheer on.  No question that the future is bright for Rebekah and her family.

Here is wishing Rebekah ALL THE GOOD LUCK she can handle during this season and the qualifying competitions for the 2014 Winter Olympic Games.