Janurary Athlete of the Month

Here is wishing all of you who come around reading this blog the VERY BEST in 2010. Let this new year give all of the chance to continue spreading the word about blood clots and blood clotting disorders so that we can STOP THE CLOT!!!
I don't think that there is a better way to start the year with some true inspiration that will get us all going. This month's Athlete of the Month definitely provides that inspiration as she is very determined to continue chasing her dreams despite surviving a clotting incident just this past year.
Please let me introduce you to KELLY HOGAN - running machine from New York City, NY.
Be prepared to get off that couch and start running as you read Kelly's responses to my questions below... ENJOY!!!
1) What is you sport/activity of choice? Why do you enjoy it?
RUNNING! Not only is running is a great time for thinking and reflecting, but it allows me to push myself to my physical limits. In running, you are often competing only with yourself and can always strive to be better, faster, and to go longer. I run alone most of the time, but I also love racing and being around so many other runners and realizing the impact the sport has on so many people. There is also nothing like the runner's high! 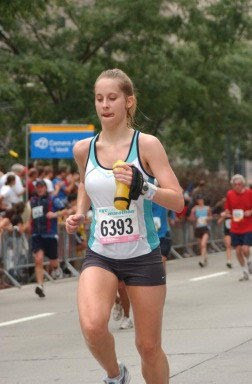 2) How did you get started in that sport?
I was a competitive gymnast for 10 years, and once I entered college I needed something to fill the void that not being able to do gymnastics left - physically and mentally. I went to undergrad in Boston, and there's no better place to start running! Once I started I was hooked.
3) What is the latest milestone you achieved or plan to achieve? (Long bike ride, some race coming up or that you did)
I want 2010 to be a great running year for me. I'm planning on racing the NYC Half Marathon, which is being held in March this year for the first time (it has been held in August the past few years). I'll also be racing various distances throughout the year - NYC is a great running city and New York Road Runners has races at last a few times a month. More long term, I'm running the NYC Marathon in November - this has been a goal of mine for a long time. I have guaranteed entry in 2010 because I was unable to run in 2009 due to my clot(s). 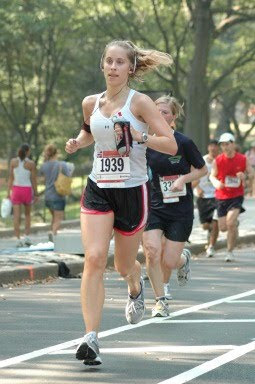 4) Tells about your clotting episode. Are you on blood thinners now? How long were you out of commission?
My episode happened in September 2009 - I had returned from a great vacation in London/Dublin and felt some pain in my calf. I thought it was running related and tried to "tough it out" as we runnners are known to do, but it kept getting worse. I had also felt some shortness of breath when trying to run and work out but thought it was just some sort of cold. I went to the doctor for my leg after the pain kept getting worse - in the back of my mind I wondered about a possible clot but thought it would turn out to be some sort of muscle tear. I was shocked to hear I had two DVTs - I was put on Lovenox and Coumadin and sent home. At this time I was breathing normally but not working out; however, I kept feeling like there was something in my lung, almost like I needed to cough. I was very anxious and a week after my diagnosis I went to the ER, where a large pulmonary embolism was confirmed in my left lung. It was, to say the least, the scariest moment of my life. I was hospitalized for three days and given a Heparin drip through IV. So far, my doctors have found no genetic abnormalities through blood testing and attribute my clots to a combination of birth contol pills, the long flights and being dehydrated. Now, three months later I am only on Coumadin for at least another three months. I'm making great progress and have never been more thankful for every day.
5) When were you able to get back into your activity? How did it feel that first time?
My third and last day in the hospital I asked my doctor when I could get back to running (did I mention I am a little crazy??), and he gave me the go ahead to get started slowly. I couldn't wait to get back into it - I think the total amount of time I took off was about three or four weeks. The first time I went on a real run I could not stop smiling - other runners probably thought I was crazy! I also couldn't stop thinking that the sound of my shoes hitting the gravel on the Central Park bridle path was the best sound I had ever heard.
6) What is your favorite piece of gear for your favorite activity? (Bike brand, running shoes, perhaps a running singlet or the Clot Buster's Running Polka-Dot Technical Shirt...)
I love my Asics Kayanos, and I would love a Clot Buster's Polka-Dot Running Shirt!
7) How much are you getting out doing your sport? (Everyday you do some training, 2, 3, 4 times per week)
Right now I'm running about 4-5 days per week on average and cross training on the other days. I don't like taking days off! 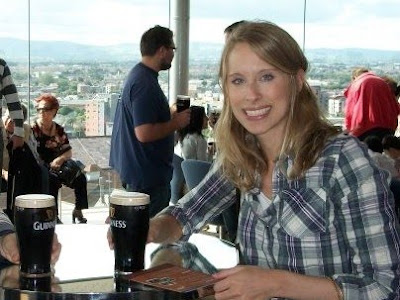 8) What is your favorite food? Either generally or after a workout. For me there is nothing better than a Chipotle Burrito...
I love food - I'm studying for my Master's in nutrition at NYU right now. I've always loved cereal (high fiber), berries, any kind of vegetable and fish. After a run I love a good peanut butter and jelly sandwich on toasted whole wheat bread!
9) If you could go some place to visit and explore, where would like to go?
Oh my gosh, everywhere! I would love to go to Greece and explore the islands, Italy, Australia, New Zealand. I've also never been to Paris - but most of the exploring I would like to do there is at the flagship Chanel store (kidding!) :)
10) What would like to say to someone who is going through a clotting episode, perhaps very similar to yours? How can people return to do what they enjoy? Tells about your concerns and what you look out after as you got back.
The most important advice I can give to anyone going through an episode similar to mine is to stay positive - it's easy to fall into a depression and wonder "why me?" By staying positive, I was really able to see the sun through the clouds and put everything into perspective. Everything happens for a reason, and how you deal life's challenges really defines you as a person. I think people should talk with their doctor's about when and how to return to what they enjoy - everyone is different so it's important to weigh the benefits and risks. Now that I'm back running, I get my INR tested every few weeks to make sure I'm within the recommended range (between 2-3), and make sure to eat a consistent amount of Vitamin K foods each day - this is important for people on Coumadin. Because I am at an increased risk for bleeding, I'm just a little more careful going about my day, and I make sure I know the signs and symptoms of bleeding just in case anything should happen.
New York City better be in the look out as Kelly is coming and she is determined to make 2010 a terrific year for her running. Along the way I know that she will be spreading the word about blood clots and blood clotting disorders to all who need to listen.
So, are you determined to achieve a goal in 2010? Whatever that goal is the Clot Buster wishes you the best of fortunes to make it a reality! The Clot Buster will be out there again doing his thing again this year taking the STOP THE CLOT polka-dots to whatever race he is doing. Be in the lookout you just never know when you will see the polka-dots.
Thanks for reading,
The Clot Buster
Posted by Clot Buster at 12:17 PM