Never in my wildest dreams I would have imagined that this simple polka-dots that represent this cause of creating awareness for blood clots & blood clotting disorders and to celebrate blood clot survivors found their way to AUSTRALIA!!!

Soon enough I will have to put up a world map and start pinning all the places where the polka-dots are going...

Well, how about I allow him to tell us on his own words via the report he filed to me about his latest athletic achievement...

Please read and get INSPIRED!

I thought I would give you a brief rundown on m Ironman at Cairns so here it is: 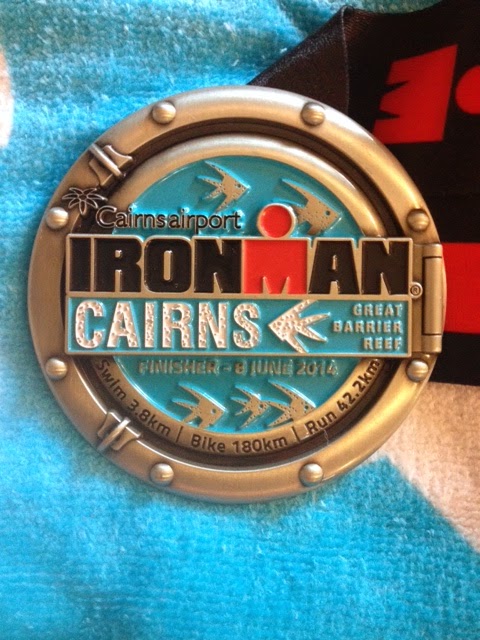 I won an entry into Cairns Ironman through Wiggle and High5 so someone does win those competitions! I found out I had won the entry about 8 weeks prior to the Ironman which was quite ironic considering my history. Cairns is about a 4 & ½ plane flight from Launceston, so the day before flying I thought I had better see my Doctor and ask what precautions I needed to take prior to flying. My Doctor advised that seeing my INR was steady at 2.7 that I would not need any Clexane, just wear compression sock, do the standard leg exercises , stay hydrated and no alcohol. The conversation changed to how much exercise I should be doing (I occasionally run with my Doctor so he  has an idea about running and exercise) he advised me that there is no set limit, however whatever I make sure I take it easy. So I told him on my holiday I might do a little swimming, maybe a little bit of bike riding and a few easy runs, he warned me about being careful on the bike so I said I would not ride in any packs. The good news was my Doctor did not say not to do an Ironman  - he will probably point out to me that I did not tell him I was planning to do an Ironman! (the reason I did not tell him was I knew what he would say and this way I did not completely ignore his advice). It was about 14 weeks since my second PE – which forced me to pull out of Melbourne Ironman in March this year and about 13 months since my first bilateral PE that forced me to pull out of Cairns last year. I am now on Warfarin for life.


My support crew (my wife Sharon, who competed the year before) arrived in Cairns a few days before the race and I did a few short easy runs and rides, there was another fellow Tasmanian who I had trained with, Maggie, doing the race so it was great to have her and her son (Tom) with us. As Tasmania where I live is the coldest state in Australia and Cairns is in the tropics I thought the heat could be a problem, little did I know that on the day of the Ironman it would be the coolest June day in Cairns since 1967 and that it would literally rain all day. 2 days before the race I bought a sleeveless wet suit and this was the best investment I have ever made, as there is a small chance of being marine stingers in the water wetsuits are allowed and are advisable in the swim, I tried the sleeveless wetsuit out the day before the race and it felt incredible, it provided buoyancy even though it felt like I was not wearing a wet suit – in a full sleeve wetsuit I have always felt constricted in the chest and I did not want that uncomfortable feeling which can lead to shortness of breath. 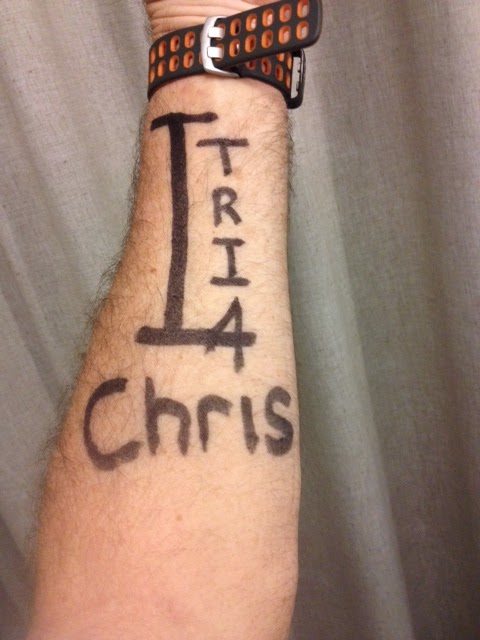 To the day of the race: The first thing I did was write a motivational message on my forearm, for me his motivational message was quite easy – I recently joined a Facebook page called I run for Michael, where basically runners team up with kids and adults that through different reasons are unable to run. The week prior to the Ironman I was matched with my buddy Chris, so I was lucky enough to be able to dedicate my Ironman to Chris , so I wrote on my arm ‘I Tri 4 Chris’.  Lining up at the mass start of the swim I made my way to the back of the pack and tried to stay calm (trying not to think about my first triathlon where I got pulled out of the water after 100m after suffering panic attack and thinking I could not breath). I started slowly and kept a comfortable pace for the whole swim and did not feel any discomfort with my breathing for the whole swim and finished the swim in 1 hour 33 minutes, I was aiming for 1.40 to 1.45 so I was quite happy. In T1 I sat down and took my time to dry off and get changed, remembering that I was there to complete the event not to set any records, so I took 14 minutes


On to the bike leg, I planned to ride smoothly for the whole distance and watch how my breathing was going and slow down if my breathing felt labored, I planned to take it fairly easy and average about 25kph to do the ride in a little over 7 hours. I averaged 28kph for the first 100k’s and felt pretty good, there were a few hills but they weren’t too bad, a few times I started to push it a bit, but thought I had better slow down a little. As expected the last 30 k’s or so was a bit hard and there was a slight head wind but I looked at my motivational message and made it to the end of the ride. The ride took 6hrs 37 minutes and it rained the entire time on the bike, which was probably a good thing because it kept me cool and made sure I watched my speed. I averaged 27.2kph on the ride so I was happy with that, once again in T2 I took things nice and easy and fully changed – this time taking 8 minutes.


Starting the run I knew I had 8 ½ hours to complete the Ironman before the cut-off time so I thought I could take it easy without pushing it, I ran/walked the first 12 k’s in 1hr 30, at 7.30 km pace. This left me with about 7 hours to complete to last 30k’s, I still didn’t have any pain in my lungs or chest and I thought I would not take any chances so I changed to a quick walk for the last 30k’s, during the run which was 3 x 14k loops I passed my wife about 6 times and received fantastic support from her. Surprisingly to 30k walk in the rain went quite quickly as there was a lot of opportunity to talk to other competitors who were also having long walk breaks. I had a few short jogs to keeps the legs moving but nothing for over 200 metres.  I finally made it to the 41k mark and knew that I would finish the event with a final look at my motivational quote and a thank you to Chris, I was near the finishing chute I saw my wife Sharon and had a quick cuddle, then it was onto the finishing chute where I heard the words “Tim Gunton You Are An Ironman” I felt pretty good, I had a quick bite to eat in the recovery area, then I went to see Sharon, as it was still raining we decided to head back to the Hotel. 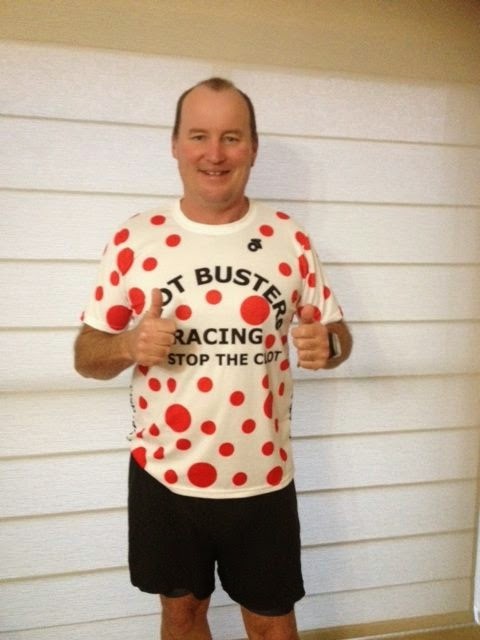 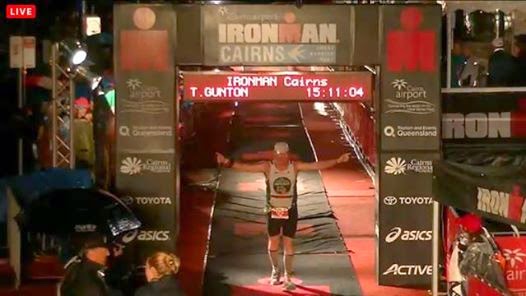 My run time was the same as the bike 6 hrs 37 minute at 9.24 min per k pace, for a total time of 15 hrs 11 minutes, which was 1 hour under my estimated time. Throughout the race my lungs/chest felt pretty good, there was the odd pain now and then but it only lasted a few seconds, after showering and more food and a beer I laid down and tried to sleep, this was probably the time I was most worried as we know once the exercise stops there is the fear of possible chest/lung pain – luckily I had almost no pain at all that night and the next few days basically no pain either.  Apart from a few blisters on my feet and tight quads I was relatively pain free after the Ironman. 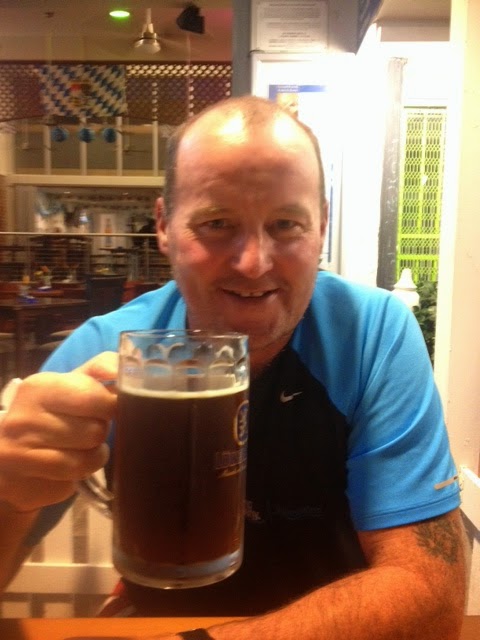 That is basically it for my Ironman experience, I consider myself extremely lucky to be able to complete an Ironman after having a couple of PE’s and being a warfarin lifer, but I also believe that almost anything is possible if you cover all the risks and take it easy – and always check with your Doctor before doing anything (just sometimes don’t tell him/her the full story)


Tim Gunton"
ANYTHING IS POSSIBLE FOR THOSE WHO BELIEVE is one saying that has pulled me through many difficult situations throughout my life.  Without a question it helped Tim push on and achieve the finish line of his Ironman event as a  survivor of multiple blood clotting events.

I am AMAZED of what survivors can do.

Can't help but to be inspired by the story that was shared with you above.

I can't wait to hear what will be Tim's next adventure but one thing is for sure blood clots WILL NOT BE STOPPING HIM NOR EVEN SLOW HIM DOWN!

Thank you for sharing your story Tim.