2011 begins and with it another opportunity to meet blood clot survivors that can inspires with their stories of overcoming and pushing through.

Let me start the new year with a story I came across while browsing my endless backlog of magazines... At this time I am still catching up with October and November issues... I am not really sure how I fell this far behind but that is where I stand.

At any rate, reading through the Triathlete Magazine's Kona Review I found the story of BRIAN ORINGDERFF and I about fell out of my seat.

Brian not only is a survivor of a very severe clotting incident but also a survior of a very personal tragedy that pushed him hard to a dark plance from which is very difficult to return from. But then a stroke of luck changed his life and brought him back... 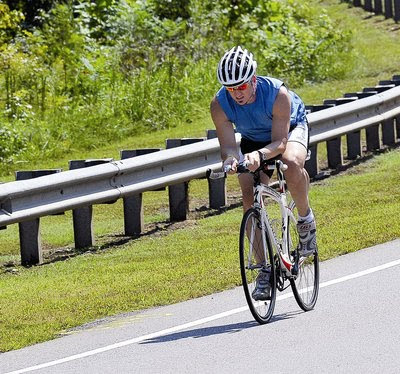 "It's been a challenging year for Brian Oringderff of Canton, but training for a grueling triathlon is giving him the physical and emotional strength to carry on.

Oringderff is preparing for the Ford Ironman World Championship, which is on Oct. 9 in Kona, Hawaii. The race includes a 2.4-mile ocean swim, a 112-mile bike race and a 26.2-mile run. Competitors have 17 hours to finish the competition.

Athletes gain entry into the race by one of three ways: earning a slot at one of the qualifying events conducted worldwide, being selected in the Ironman Lottery or winning a slot through Ironman's charitable eBay Auction.

Oringderff, 40, a former college athlete who has participated in shorter triathlons, won his spot through the lottery.

In 2010, 7,339 people entered the Ironman lottery, which awarded 150 slots to U.S. citizens and 50 slots to international athletes.

"I knew I wouldn't have another chance to do this," said Oringderff, who manages a group of technicians for Hewlett-Packard, as to why he tried for a spot.

The race is helping him concentrate on something other than the devastating events of the past year.

Oringderff had shoulder surgery last August. Two weeks after the surgery, he started feeling a strange pain in his calf. He went to the emergency room and learned he had two large blood clots in his left calf.

Four blood clots had broken off and traveled through his body and lodged into his lungs, a condition, called a pulmonary embolism, which is fatal 33 percent of the time. As a result, he was sidelined from participating in or training for triathlons.

His spirits were held up by the prospect of the birth of his first child, a son named Jet. He was to be born in April but, due to circumstances doctors couldn't explain, Jet was born in January - 14 weeks premature.

Jet was improving for six days, Oringderff said, but developed sepsis and died on the seventh day.

Oringderff's wife, Denise, said learning he was selected in April for Ironman has been a "second chance" for him.

"It would have been easy for him to sit and mope around," she said. "He is taking it to another level. I couldn't be any more proud of him."

Focusing on the race, Oringderff said, has been good for him.

"For me, it has brought me full circle," he said.

Oringderff devotes 15 to 17 hours a week in intense training. He has worked with a triathlon coaching company, Endurance Concepts, to get in shape.

"I have been through so much," Oringderff said. "It has brought me back to good health and a good state of mind."

Catie Case, public relations coordinator for World Triathlon Corporation, which organizes the race, said they were unaware of Oringderff's circumstances, "but like so many of our athletes, he is truly an inspiration."

Oringderff said he didn't set out to inspire others, but is happy at the idea of others gaining hope from his journey.

"You have to move on," he said. "I honestly think my name was chosen for a reason.""

This is wihout a question an amazing story.
"Anything is Possible!" as the slogan from Ironman says.
Brian if you ever get around reading this post - THANK YOU for the inspiration. Maybe some day we can get you in some CLOT BUSTER polka-dots so that you can spread the word too about the dangers of blood clots and blood clotting disorders.
Thank you for reading,
The Clot Buster
Posted by Clot Buster at 12:25 PM

That is an amazing story on so many levels.