Sadly the summer is coming to an end...

As Labor Day is coming around next Monday all of our outdoor pools in Ohio will be closing and with them closing I will lose the chance to continue to work on my tan...

But seriously it is sad that coming up fall is almost here and after that the dreaded winter... I simply cannot warm up to the cold of the winter...

Now, not everything is doom and gloom.  Definitely for SEPTEMBER's Athlete of the Month every day is a new opportunity that he will take and enjoy to the max.  The perspective of this individual after his own blood clotting incident is a true inspiration to all who is going through a similar issue.

Please allow me to introduce to you ROLF ARANDS who is making his own come back and sharing his thought with all of us...

Please READ ON and GET INSPIRED!!!

1) What is you sport/activity of choice? Why do you enjoy it?
This is a hard one to answer but today's answer is swim/bike/run although I am not doing tris at the moment. Stay tuned though :-)

2)  How did you get started in that sport?
I swam recreationally in college, starting freshman year to relieve stress and also because the pool was conveniently right across the street. I met a triathlete and jumped into tris, did them through 2000 or so. After 3 Ironman races within a 12 month span, I burned out, hung it up and did a little running over many years, a race here or there but nothing worth writing about. More recently, after my mom passed away a few years ago, I cleaned up my diet, lost a lot of weight and began to run really well, setting new lifetime PRs 10-20 years after I first set them.

In recovery from my surgery, DVT and PE issues, I have resumed swim/bike/run and realized I love all 3 and there is a reduction in injury risk this way.

3)  What is the latest milestone you achieved or plan to achieve?(Long bike ride, some race coming up or that you did)
After losing so much weight and really focusing in on my diet specific to an unrelated disorder I have (reactive hypoglycemia), I began to run really well. I started taking down lifelong PRs set some 10-20 years ago, at age 45-46, and beating speedsters I was never even close to before. I don't know if or when I can get back there, but that was pretty cool. The coolest was running a smart race at a 10K, making a decisive move at mile 5 to pass a guy, and ended up that pass got me first ever 10K age group win!

4)  Tells about your clotting episode.  Are you on blood thinners now? How long were you out of commission?
I tore two ligaments in my left ankle in June 2012, running trails. I did what any runner would do … ignored the pain until it literally dropped me to my knees. An MRI confirmed the tears in October 2012. While the northeast was recovering from Superstorm Sandy and power was being restored, I was having surgery on said ankle in Somerset, NJ on 11/2/12. I had a cast from kneecap to toes for 4 weeks thereafter, the immobilization being the primary cause of my DVT/PEs. 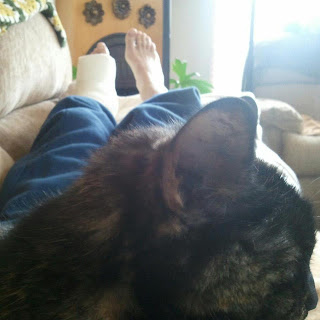 My trouble began on Tuesday, Nov 13, 2012, 11 days after surgery and in the high risk window for DVT from lower leg surgery. I felt something funny in my calf under the cast, but couldn't get my fingers to it to check. The blood was surging much like water shoots past a finger blocking a running hose. That of course was the initial DVT.

Later that day, I was supposed to have a conversation with a friend by phone, but canceled because I started feeling pretty crappy. I had a new odd back pain, very low on right side, and writhed around overnight trying to get comfortable but couldn't.

On Wed, Nov 14, by mid-morning, things got worse in a hurry. Suddenly, moving around got difficult, I could only gasp a word or two on a breath, small efforts had me panting for air, and the pain became sharper in my lower right back. I called my doctor, and he directed me to the ER. He knew from my voice … pulmonary embolism.

The memory of the rest of that day is fuzzy, like being between two worlds. I had to get my basic stuff collected (ID, keys, phone), and waited for help. I was home alone, and we had left the front door unlocked every day specifically for this type of emergency, but today it was locked for some reason. It took me about 15 minutes to crawl about 10 feet to open the door, and then back.

Fast forwarding to the ER, the DVT had hit both lungs and I was now facing very large bilateral pulmonary embolisms. The first hours in my 3-day hospital stay were fuzzy (morphine fog?) but I recall hearing … "lucky" … "few more hours and" … "oxygen good despite how bad" … and "big".

Had I not gone to the hospital when I did, just hours later would have been it. Lung cancer took my mom in about 2 years. The PEs could have taken me in less than 2 days. Unreal how serious and fast these things move.

I could only pull about 1.5-2 liters of air at full breath that day. Today, I can draw about 6 liters … gives an idea of how far these things reached.

5)  When were you able to get back into your activity?  How did it feel that first time?
I was able to weakly pedal a stationary bike by mid December, was overjoyed and in tears at doing SOMETHING aerobic again. My first solo walks took 1/2 an hour over a distance I now cover in less than a minute running. I was back in the pool in January 2013, somewhat comical as I hadn't been in a pool in 10+ years plus the loss of fitness. Running took a while, as I fractured a bone in the other foot on the day I was cleared to run. Oy!

More to the question, I ran my first 5K since all this happened in late July 2013. I never fist-pumped and smiled as big as I did finishing a 5K as slowly as I did. Nope, the last time I did that … I finished my first Ironman!

Anyway, resumption of activities have slowly phased in since January 2013.

I just felt slow and out of shape, but the excitement of exercise kept me encouraged. Swimming was instrumental in really pushing air through the lungs, a key element in PE recovery. 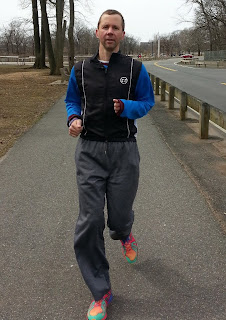 6)  What is your favorite piece of gear for your favorite activity? (Bike brand, running shoes, perhaps a running singlet or the Clot Buster's Running Polka-Dot Technical Shirt...)
Compression socks … I didn't start using them until many weeks passed into 2013, but they have been a godsend to keep the lower leg swelling down (man it was bad early on) and easing my worry of another DVT (although my risk is low). And they look rather comical above my rainbow New Balance running shoes :-)

Outside that, my Barracuda swim goggles. I wore them for my 6 Ironman races and most of my swimming days. They are large and clunky, and make a statement!

7)  How much are you getting out doing your sport?  (Everyday you do some training, 2, 3, 4 times per week)
Running is back to about 4 days a week on average, varying from 20-30 miles a week (down from my typical 45-50 mostly due to ankle, but hey I am alive!). Biking is a couple hours a week, and swimming is usually 2x a week, 2000-3000 yds each time. The ankle is the primary limiter of activity, not the lungs. I don't have my former aerobic capacity, but that is coming around steadily as I work through each week.

8)   What is your favorite food?  Either generally or after a workout.  For me there is nothing better than a Chipotle Burrito...
Salmon with avocado, quinoa on the side and a Corona beer with lime. Doesn't get any better than that!

9)  If you could go some place to visit and explore, where would like to go?
Sweden … spent many days there long ago, but really want to see more of that beautiful country and my extended family there. Next summer we're going! 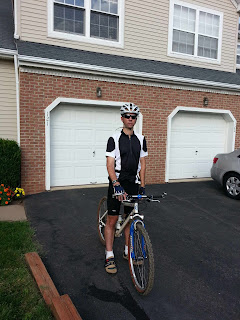 10)  What would like to say to someone who is going through a clotting episode, perhaps very similar to yours?  How can people return to do what they enjoy? Tells about your concerns and what you look out after as you got back.
Guilt and self doubt … deadliest enemies. I mentally ran myself into the ground day after day, feeling like I did something wrong, that I let people down, let myself down, blah blah blah.

I didn't do anything wrong. Sometimes, bad things just happen and that day, my number happened to be called.

When all this happened, I got home from the ER on a Friday after 3 hellish days. Barely two days later, my wonderful and incredible sister Lisa dropped her life in Washington, flew cross country and was here to make sure I stayed out of trouble. She sat in this house with me for 5 days, bored out of her mind but just amazing.

People are amazing in times like these. People will be there, and you can trust them. Learning to ask for help is one step. People won't get angry and they will help.

Learning to trust yourself, that's a biggie.

DVT/PE is fatal 33% of the time the two come together. Unbelievable. But I am still here. My body has cleared out the clots in my lungs, my ankle is healing. I am running, swimming and biking and living life still. How cool is that! On Nov 14, I faced death and today I can do all these things.

When these clotting events occur, it's easy to compare today to how you were before the clot occurred. When these events happen, there is a new starting point. Yeah, I ran 19:34 for a 5K and now run 7 minutes slower. Who cares! New PRs ahead!

Trust yourself, your body. It will heal, and if you listen to it carefully, it will not let you do anything beyond what you should be doing. That for me is a huge takeaway. Being more attentive and careful in training, backing off more often if I get worried or feel the need.

Finally, victories and recovery come a little at a time. Focusing on the daily ups and downs will frustrate you, but as long as the overall big picture is showing improvement, riding the little ups and downs gets a little easier.

Other than, I  have a sneaky suspicion that Rolf will be back to racing triathlons sooner than we think...

Rolf - THANK YOU for your willingness to share your story and provide very much needed inspiration to many others out there.