This post is NOT an April Fools Joke about a blood clot survivor that can inspire all of us with her dedication, discipline, determination, never quit attitude, and pure love of her life.

I am not sure I can keep up with her as she is always on the move... with family, working, training and racing... I sure admire her energy and would love to know her secret to keep her going...

I am very fortunate to have had the chance to meet her in person one time as she slowed down enough to catch a bite to eat last year.  I very much enjoyed learning about her story and how she is determined not to let her clotting incident slow her down because she has many (and I mean many) very cool items on her bucket list that she is checking off one at the time...

Personally I don't know how she does it but I hope that as you read her story some of NANCY KUSHINSKY's drive rubs off on you as it has with me... Don't leave for tomorrow what you can do today...

"1)  What is you sport/activity of choice? Why do you enjoy it?
- I'm a runner.  That's pretty much it anymore.  It's a sport I can easily take on the road with me since I travel so much for work.  I love running because it is my escape from stress and it gives me a chance to clear my mind and/or work through problems. I have also been lucky to find two great running groups that are very different from each other but are full of great people and are really supportive. 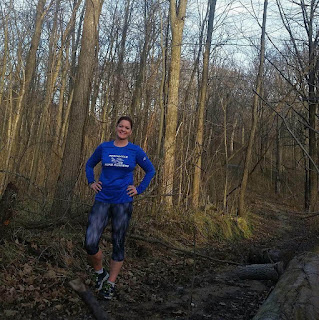 2)  How did you get started in that sport?
- I was a runner in high school but then didn't run again until my 30s.  I was tagged in a Facebook photo and when I first saw it I couldn't figure out why I was tagged in it.  But then I hovered on my name I realized the person I was linked to was me.  I didn't even recognize myself.  So I untagged myself (of course!), had a good cry, and signed up for my first half marathon that night.  I went to being sedentary to training for a half marathon in the click of a button.


3)  What is the latest milestone you achieved or plan to achieve?(Long bike ride, some race coming up or that you did)
- I am working towards I half marathon in all 50 states.  Injuries derailed me a bit last year, but I am back in racing shape.  I'll be knocking Arizona, Oklahoma, and Missouri off the list this spring.  So far I am at 30 half marathons total, covering 19 states, DC, and Ireland, Iceland, Italy, and Spain.


4)  Tells about your clotting episode.  Are you on blood thinners now? How long were you out of commission?
- I went for run and not even a third of a mile in I had a horrible pain in my neck and along my right shoulder.  I thought it was a pinched nerve so I continued with my run as well as going to work.  Over the next week or so I had trouble breathing on my right side.  I thought I had pulled a muscle or separated a rib.  Trying to lie flat at night to sleep was torture.  Then one night I woke up around 2am gasping and desperate for air but every breath hurt worse than the last one.  Went to the emergency room where I walked in under my own power because I refuse to use wheelchairs (and bedpans!).  They did chest x rays and diagnosed me with pneumonia.  I was given an IV drip of antibiotics and would be discharged when it was done.  Lucky for me, there was a shift change before the drip was done.  The new doctor ordered a CT scan.  Shortly after everyone started freaking out and that's when I was told it was multiple bilateral PEs with infarction and not pneumonia.  I was in the hospital for five days, did lovenox shots at home for a bit, and then was on warfarin for over 18 months.


5)  When were you able to get back into your activity?  How did it feel that first time?
- I went to see my primary care doctor after being discharged from the hospital and asked her about running.  She told me I could start walking again when I felt ready and slowly work back into running.  She told me to expect it to take a while and that my speed might not get back to where it was before.  So I asked her if a half marathon in two weeks was out of the question.  She laughed...and then realized I was serious.  LOL  She said I could try to do it but I might not finish.  So I got on a plane to Idaho two weeks later and did my 8th half marathon.  It was hard and it wasn't fast, but I did it!  I felt like I couldn't ever get a deep breath most of the race and had to walk at times.  The air was really cold, which for me has become an issue since get the PEs.


6)  What is your favorite piece of gear for your favorite activity? (Bike brand, running shoes, perhaps a running singlet or the Clot Buster's Running Polka-Dot Technical Shirt...)
- I love Asics for road running, Saucony for my trail shoes, and my Simple Hydration water bottle is perfect for me since I hate holding anything in my hands.  And I do looove my Clot Buster's polka dot shirt.  Whenever I wear it in a race someone tells me they like it.


7)  How much are you getting out doing your sport?  (Everyday you do some training, 2, 3, 4 times per week)
- I'm streaking right now.  So as of writing this, I have run 113 days in a row.  That included doing laps in the JFK airport terminal when my flight canceled due to a snow storm! 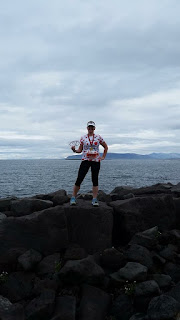 8)   What is your favorite food?  Either generally or after a workout.  For me there is nothing better than a Chipotle Burrito...
- I love Buffalo Wild Wings!  I'm pretty much a regular there, especially during March Madness.  Pre race I like pizza and beer (preferably an IPA) the night before a race.  Post race I want a Diet Dr. Pepper. 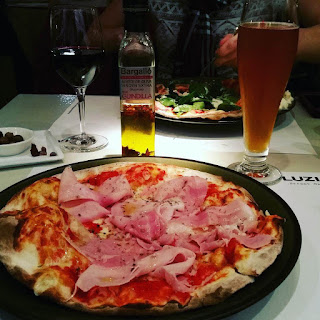 9)  If you could go some place to visit and explore, where would like to go?
- Iceland was a bucket list destination and I knocked it off last fall.  It was amazing!  I travel a lot, but of the places I haven't been yet I would say South Africa, Morocco, and Cuba are high on my list.  I've never been to South America, but the plan is to get to Chile, Argentina, and maybe Uruguay this fall.


10)  What would you like to say to someone who is going through a clotting episode, perhaps very similar to yours?  How can people return to do what they enjoy? Tells about your concerns and what you look out after as you got back.
- Don't be afraid to speak up if something doesn't seem right.  You know your body better than anyone else.  If you feel like you aren't getting answers or are getting dismissed, get a second opinion.  You also have to be your own biggest support system.  Most people have no idea how rough the road back from PEs and DVTs are so even friends and family may seem unconcerned simply because they don't understand."

Nancy - THANK YOU for your willingness to share your story.

You certainly have a plan and I HOPE THAT YOU GET TO ACHIEVE ALL OF IT if not more.

From here in Columbus, OH I will continue to follow your progress anywhere in the world... Although I am jealous most of the time you give me the inspiration to plan "racecations" to unique destinations.  I would love it if you could take me with you some time... just know that I am fluent in Spanish so I offer free translation for a half-marathon race in South-America or Spain (Second go around in Barcelona..?) with the CLOT BUSTER #StopTheClot polka-dots...

By the way, I never thought that the CLOT BUSTER #StopTheClot polka-dots could end up in Iceland... Where are we going next...?!?! Where ever it is take pictures and share them with us!

Anything is possible for Blood Clot Survivors!

Get inspired and do what you can one step at the time!

Thank your for reading,