For a while I was concerned that following up the June Athlete of the Month blog-post celebrating 5 years worth of inspirational blood clotting survival stories was going to be difficult.

But it turns out that is not the case.

Last month I had the great fortune to get in touch with this individual and learn about his clotting background that shook me to the core.

Please read on below and find out for yourself as to what I am talking about as you read JIM SPENCER's story which he was so gracious in sharing with us... 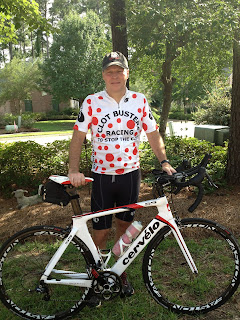 1)  What is you sport/activity of choice? Why do you enjoy it?
I love cycling.  It is hard to beat the thrill of riding fast in a pace line.  I also enjoy the challenge of struggling to get up a hill.  Nonetheless, triathlons are my favorite activity.  I have played sports my entire life and have always enjoyed competition. ( I played on the golf team in college.) Triathlons offer the ultimate in competition. It is the hardest thing I have ever done.

2)  How did you get started in that sport?
I started cycling after my son, Jake, passed away in 2003 from complications due to blood clots from an injury he sustained playing junior high football. (Coincidence only since neither Jake nor I had a clotting disorder). I had to find some outlet to help deal with the loss. My friend and law partner, Clifford Ammons, encouraged me to get out and ride bicycles with him. I bought a cheap road bike and got started.  Through cycling, I met Charles and Nicki Shepard, both of whom are a lot younger than me. I learned how to climb hills on my bicycle by trying to keep up with Charles.  Charles and Nicki are also very competitive triathletes who win or place in their age groups. They have completed multiple Ironmans.  Charles and Nicki really encouraged me to give triathlons a try.  I finally did a beginner triathlon in 2010 and I was hooked. I have done 15 triathlons since 2010.

3)  What is the latest milestone you achieved or plan to achieve?(Long bike ride, some race coming up or that you did)
I competed in the Heatwave Triathlon on June 1, 2013 in Ridgeland, Mississippi. It is a ½ mile swim; 24.5 mile bike and 10k run.  I still don’t have my stamina back to the pre-clot levels; but I was very happy to be out there 3 months after my clotting episode. My time was 2:44, about 7 minutes slower than last year. The Mississippi humidity was a bear that day, or in any event, that is my excuse.

4)  Tells about your clotting episode.  Are you on blood thinners now? How long were you out of commission?
I was training for the New Orleans Half Ironman in April of 2013.  As a part of that training, I ran in the Mississippi Blues Half Marathon in January of 2013.  After the half marathon, my right calf began to bother me when I ran. I took some time off thinking it was just a strained muscle that would heal with time; however, it didn’t get any better.  In late February of 2013, I had to fly to Wisconsin on business. When I got off the airplane in Wisconsin, my leg hurt so bad I could barely walk.  It seemed to get better as the week went on but it still hurt, especially at night. I returned to Mississippi on Saturday and went out with the Sunday afternoon cycling group for a 50 mile ride.  I had a hard time keeping up with the group due to shortness of breath.  I went to a Monday morning spin class and I could not catch my breath.  I called my doctor that day, but I didn’t tell him about my shortness of breath.  He worked me in on Tuesday.  Once he saw my leg and I told him about my shortness of breath, he immediately suspected a blood clot, which was confirmed by an ultrasound of my leg. The blood clot is located behind my right knee. He also suspected a small clot in my lung because of my shortness of breath. I never had any chest pains. He gave me five days of Lovenox shots and a prescription for 6 months of Coumadin.  I was cleared to start back exercising at 4 weeks as long as I promised to go slow. (I might have taken some liberties with that promise.) I was tested for a clotting disorder, but the test came back negative.

5)  When were you able to get back into your activity?  How did it feel that first time?
I rode for the first time at 4 ½ weeks after the diagnosis. For the first 10 miles or so I was actually scared I was going to die.  After I made it that far, the fear went away. I still have some pain in my leg but nothing that they are concerned about. 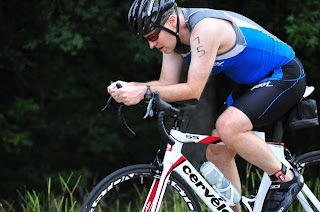 6)  What is your favorite piece of gear for your favorite activity? (Bike brand, running shoes, perhaps a running singlet or the Clot Buster's
Running Polka-Dot Technical Shirt...)
Without a doubt it is my bicycle, which is a Cervelo S5.

7)  How much are you getting out doing your sport?  (Everyday you do some training, 2, 3, 4 times per week) I usually do some form of exercise 6 days a week.

8)   What is your favorite food?  Either generally or after a workout.  For me there is nothing better than a Chipotle Burrito...
We have a lot of good food in Mississippi but my favorite is a steak from Shapley’s Restaurant in Ridgeland, Mississippi.

10)  What would like to say to someone who is going through a clotting episode, perhaps very similar to yours?  How can people return to
do what they enjoy? Tells about your concerns and what you look out after as you got back. A clotting episode is a serious and potentially life threatening condition.  I was very fortunate to have a good doctor who caught my clot early.  A clotting episode is not the kiss of death. You can still compete and eventually back to your pre-clot activities.  Now that I know the symptoms, I watch out for any reoccurrence of those symptoms. For example, I still check my leg for swelling after running.  If I had one word of advice it would be to pay attention to what your body is telling you. I almost waited too late myself.  A leg ache that won’t go away needs to be examined by a doctor.

Get inspired because if Jim can come back you can and will as well.

Some day I am looking forward to the chance to get to ride and race with Jim and together display our CLOT BUSTER Stop The Clot polka-dots and after that dive in to some of that steak he mentioned above.

THANK YOU Jim for your willingness to share you story.  Amazing what the power of cycling and triathlon can do as you went through your clotting incident and the life altering event that also resulted from blood cots.

Keep hitting the road as your story can motivate others to get through and overcome.

Way to stay keep going out there Jim. Keep it up!