March Athlete of the Month

As part of the celebration of March being DVT Awareness Month I am honored to have the opportunity to introduce to you a truly inspiring story of coming back from a clotting episode to take on some massive events.

I love having the opportunity to have this blog and to start the polka-dot movement which has afforded me getting in contact with some incredible people and their stories of survival. Well, meeting Mr. MARTY BUSEKRUS was not different as I believe he read about me through my blog and looking for the chance to spread the word about blood clots and blood clotting disorders. But better yet he agreed to share his story with all of us as I know you will find it as inspiring as I did. 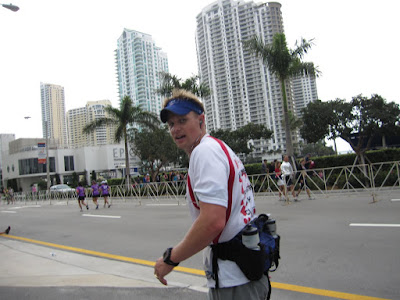 Please follow along to learn Marty's answers to the series of questions I like to ask all of my guests...
1) What is you sport/activity of choice? Why do you enjoy it?
Triathlons/marathons - I enjoy them because I'm terrible at them. Running does NOT come natural to me. I've always been a decent athlete, but could never run. I stayed with two friends of mine throughout 2005 who would get up every morning and go for a run. I thought they were nuts! I was slightly overweight and lethargic so I decided to see if I could run a mile. I couldn't. I realized it was a lot harder than it looked, so I started running because it was very challenging for me. Then in 2006 I had my first child. Since my father died when he was 39 and I was 12, I knew I really needed to get in shape and stay in shape for my son. Running seemed to be a decent avenue for that and I was perplexed at how hard it was! My friends were running 5 miles at 7 minute mile paces and I was just flabbergasted that anyone could do that! My 5 mile time was about 11 minute miles on a really good day. I did a marathon, suffered through that, but learned a lot. Then in 2008, a friend of mine convinced me to do a sprint triathlon. The swimming came natural as I had swam all my life semi-competitively. Biking was pretty easy for me, but the run was still my weakest point. I did it anyway and loved every second of it.
2) How did you get started in that sport?
Another friend of mine (shown in one of the attached photos) had done a few short tri's and he talked me into doing one with him. I said "sure" and that was it really. 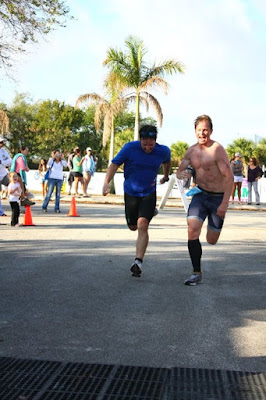 3) What is the latest milestone you achieved or plan to achieve? (Long bike ride, some race coming up or that you did)
I'm signed up for my first full ironman (2.4 miles swim, 112 mile bike, 26.2 mile run). 4 years ago I knew that the people that did those races were out of their minds! I feel the same way now that we're out of our minds, but I have SO much more respect for those that accomplish the full Ironman because now I know what it takes to compete and it's A LOT more than I had initially thought being an outsider. If I finish, that will be the biggest milestone of my life.
4) Tells about your clotting episode. Are you on blood thinners now? How long were you out of commission?
First blood clot was when I was 17, playing collegiate volleyball for Southern Illinois University at Carbondale. All of the doctors thought it was a pulled hamstring, so no one even thought it could be a clot. After weeks of hobbling around and it getting worse, finally one doctor suggested I get a venogram (where they shove that HUGE needle into the top of your foot and inject the dye). After passing out during the test at the sight of the needle, I woke up to the news that I had a HUGE blood clot that ran from my ankle to my groin. 10 days in the hospital on heparin, then 6 months of coumadin and I was back in business. I never really had any other issues, I wasn't on blood thinners, I didn't wear compression stockings, etc. Then, in September of 2008, nearly 13 years later while I was increasing my running mileage, I started to feel those pains again. Long story short, I had the sonogram test done (thank goodness it wasn't that needle) and ended up back in the hospital for 2 weeks this time getting rid of a 2nd clot in the same leg. Got out of the hospital and 10 days later did a sprint triathlon. Looking back, it probably wasn't the best idea as I did terrible and still had some type of respiratory thing that I must have caught in the hospital. The 2nd clot was slightly different because this time I had a LOT of superficial blood clots that get inflamed every once in a while. When I run in very cold weather, I really have to be careful s they don't get inflamed even 2 years later now. I am on 12 mg of Warfarin/Coumadin and wear my medical grade stocking every day. I also wear the athletic compression stockings when I exercise and race. They help out a TON! Not to plug any one brand, but I'm kind of partial to the Zensah sleeves. Outside of normal swelling I don't seem to have any long term side effects though.
5) When were you able to get back into your activity? How did it feel that first time?
I kind of tricked my doctor a bit I think. When I got out of the hospital in 2008, I asked if I could ease back into biking/running, etc. He said yes I could ease back into it. I asked if about an hour would be okay and he said "yes." What I didn't tell him is that it was an actual race that I'd be doing and my goal time was a little over an hour. My leg felt okay, but just had some respiratory problems from something I picked up in the hospital from laying there for 2 weeks. 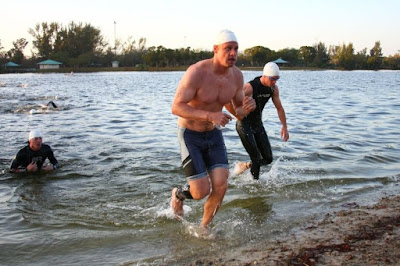 6) What is your favorite piece of gear for your favorite activity? (Bike brand, running shoes, perhaps a running singlet or the Clot Buster's Running Polka-Dot Technical Shirt...)
I wear my clot buster racing shirt at most of my races and even during my training. I often get asked about it. I also wear the clot buster arms bands that have the polka dots. Very cool. My bike is excellent. I bought a used Quintana Roo Tri-bike for $700 and then have changed out almost everything on it with the exception of the frame. The one thing I couldn't live without is the ISM Adamo racing seat. Again, not to plug anything specific, but that seat with the split nose just rocks.
7) How much are you getting out doing your sport? (Everyday you do some training, 2, 3, 4 times per week)
I have a gym by my office that opens at 5 am. I am standing outside the door at 5. I do about a half an hour-45 minutes of weights followed by at least an hour and a half during the off season and up to 3 hours of cardio 5 days a week. Then on weekends I do an additional long day which is either a 3-4 hour run or a 4-5 hour bike. As long as I've got my compression gear on to help the bloodflow to my right leg, I'm fine.
8) What is your favorite food? Either generally or after a workout. For me there is nothing better than a Chipotle Burrito...
I can't seem to eat enough pizza and french fries combined with Mich Ultra. although a Chipotle Steak Fajita Burrito sounds perfect right now for breakfast! This is my downfall. I eat terrible. I have a high metabolism because I work out so much, but if I ate like most athletes do I'd lose that extra 10 pounds and look like one of those tri guys on the covers of the magazines. Just not ready to give up my pizza, fries and beer. 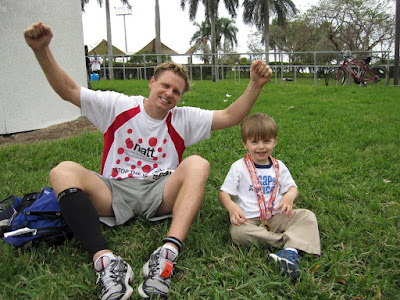 9) If you could go some place to visit and explore, where would like to go?
Europe. Pack my bike, spend about 2 weeks biking Europe. Sounds like a nice get-away to me. I'd probably sign up or a race there to, just to say I ran the Paris Marathon or something like that.
10) What would like to say to someone who is going through a clotting episode, perhaps very similar to yours? How can people return to do what they enjoy? Tells about your concerns and what you look out after as you got back.
Everyone is different, so I shouldn't say this with 100% certainty, but blood clots don't hinder your life. They adjust it, that's all. After my first blood clot, I never really returned to competitive volleyball. I had gained a lot of weight while I couldn't play and then used the clot as an excuse not to return I think. If the blood clot stops you from doing something you love, my advice is get a different doctor that will fix the pain. Get rid of the pain and you'll be able to do what you want. I'm sure there are situations where this can't or doesn't occur, but don't let the clot be an excuse. If your activity or sport ha a risk of you getting injured and bleeding (i.e. crashing your bike) you NEED to get one of the road ID bands that tells people you're on blood thinners. Again, it shouldn't stop you from doing anything, but you do need to adjust and think before you do things.
Marty, THANK YOU for sharing your experience with us.
I wish for you THE VERY BEST on your Ironman... I can't believe that you will be doing that... I admire the distance, I follow it, and I probably know more that I care to admit but to ever race that distance I think it will not happen any time soon... so Marty you got the STOP THE CLOT polka-dots to carry for 140.6 Miles! Just think about pizza and beer that will be waiting for at the finish. Without a question I will be rooting for you and enjoying the same pizza and beer upon your finish of the race.
Who knows someday we may be able to race together and double the effort to spread the word about blood clots and blood clotting disorders.

I am about to get on my trainer to ride some because people like Marty make me push that much more.
Get inspired and STOP THE CLOT!
Thanks for reading,
The Clot Buster
Posted by Clot Buster at 12:34 PM

Marty, "March Athlete of the Month" That is so awesome. I do not know where you get the inner strength to do this. I am perfectly content with doing my occasional 5K's. I am with you on the Pizza & Beer. Not giving it up. Must be in the genes. Love you, Aunt Peggy