Being part of the blood clotting community has been a pleasure all of these years.

I can't hardly believe that I started this blog as the Clot Buster back in 2006 and that this coming June I will be posting my FIFTH year of consecutive Athlete of the Month postings in which I featured a blood clot survivor.

Without a question everyone of these stories has been inspiring to me to keep going take the Clot Buster polka-dots to STOP THE CLOT farther and wider every day.

I so wish that I could meet every single blood clot survivor I posted about over the years and spend some time with them as they are back doing whatever sport they love to do.  For sure those would be some powerful moments to share.

This month's Athlete of the Month I stumbled upon as I was checking a NBCA (www.STOPTHECLOT.org) posting on Facebook and I learned that this individual was preparing to participate in this year's 70.3 IRONMAN OCEANSIDE Triathlon.

How did he do you may be wondering?


Well, let me first introduce you to Mr. CHRIS MENJOU from Torrance, California who is not letting a blood clot incident slow him down as he is continuing to do the activities he enjoys the most.

... And of course his race in OCEANSIDE was SENSATIONAL! According to his Facebook page he DESTROYED HIS PREVIOUS PERSONAL BEST in the Half-Ironman distance by a grand total of 20 minutes... simply amazing!

Back in July of 2009 Mr. Menjou posted the following information about his clotting incident on Slowtwitch.com

"As triathletes we often consider ourselves healthier and fitter than the average person in the next cubicle over. And that's true. And good. But it's not necessarily always a good thing, it turns out. I had heard of DVT (deep vein thrombosis, or blood clots in deep veins, usually in the legs), and frankly outside of scuba had never heard of PE, or pulmonary embolism (PEs usually occur when a DVT breaks free, travels through the heart, and lodges in the lungs, although there are other less common causes). I always assumed DVTs were suffered by overweight and out of shape scotch drinking business flyers. Or, more publicly, David Bloom, a war correspondent who spent hours a day in a cramped Humvee in Iraq (turns out it was the PE that killed him). I certainly didn't think these were things that we triathletes needed to worry about. Hell, I've done an IM and a bunch of HIMs, lead an active life, young, relatively healthy, no way this happens to me.

That is, until I was diagnosed last week with multiple bilateral PEs.

My symptoms started several weeks ago with a shortness of breath, starting on exercise but soon while at rest as well. Just in general I felt sorely out of shape. I had gone from completing IMAZ last November to utterly out of shape, suffering through WF long course in May. Weeks of CBCs, x rays, EKGs, CT scans, pulse ox tests, spirometer tests, showed that my heart was strong and my lungs were functioning properly, leading to misdiagnoses of bronchitis, walking pneumonia, pleurisy, exercise induced asthma and post viral bronchospasms. It wasn't until last Wednesday (ironically, the day I got my CBC panel showing me to be in "perfect health" and a pulmonologist giving me an inhaler and telling me that the pain in my side on breathing was probably a pulled muscle from coughing) when I drove myself to the ER in excruciating pain on breathing, that a lung CT was finally done, showing the emboli. Upon which I was promptly admitted to the hospital, where I spent the next four days, suffering further indignities such as peeing in a bottle and wearing one of those gowns.

But I could have buck naked for all I cared at that point. One of the articles linked states that you will find "your threshold of pain" with a PE. I can attest. Vicodin could not touch it. It was not until I got IV drugs, which made the TV run down the wall, that I could finally breathe without pain. Thankfully, it wasn't until a few days later that I learned how dangerous PEs are, and that most are not diagnosed until the autopsy. Sobering.

Where did mine come from? We don't know yet. Perhaps a DVT following Wildflower long course and then the 5 hour drive home? Perhaps genetics (all genetic test so far negative)? Perhaps some other cause? Yet to be learned. I have been put on blood thinners, which means, if I am smart (and my wife locks up the bikes), I am off the bike for the next 6 months or so. Since my blood will clot very slowly on the thinners, falling and hitting my head would be a "not good thing." I have gone from IMAZ and Wildflower to brisk walks on the Esplanade as my main source of exercise. " 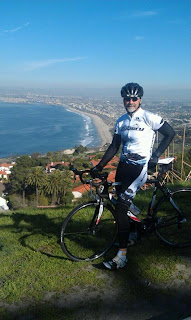 As you read the piece of the article from Mr.Menjou I continue to be amazed on how these clotting incidents can happen to anyone at anytime regardless of your physical condition.  No question that Mr. Menjou is very lucky to not only survive multiple PE's but also have the ability to return to sport and elevate his performance to a level in which he is improving his times and is having a blast while doing it...

I feel like getting my running shoes and running some miles right now...

I need to be ready in case my wish to get together with all of my featured athletes on this blog comes true.  For sure Mr. Menjou will put me in the hurt box and laugh about while doing it...


GET INSPIRED! (even if your recovery is challenging)
BLOOD CLOTS CANNOT STOP YOU not even slow you down!