Once again in 2015 the STOP THE CLOT community is fortunate to get the chance to participate in the NYC Marathon as a benefiting charity and as such for the third year running we have a team of Blood Clot Survivors, Family Members, and Friends running to celebrate survival and also spread the word.

Just like I've done in years past I feel that it is my obligation and pleasure to introduce to you some of these runners willing to stare 26.2 Miles in the eye and take it down all while wearing the #StopTheClot polka-dots so that they can spread awareness and hope to all those who need it.

I am very fortunate to have the pleasure to introduce to you one of these runners and his story of survival which he has been willing to share with all of us so that we can definitely be inspired to beat all of the odds stacked against us.

"When I was about to turn 40 I decided to run a marathon. A friend had started running marathons when she turned 50 and I figured if she could do it I could too. My first marathon, I did everything wrong and still finished. I decided to do another and joined a local running group. This was the beginning of my running addiction. My group would run in different states and I had a blast and developed some great friendships. After I had run in a marathon in 10 states I realized that maybe I could run one on all 50 states. I recently ran my 40th marathon and I have 14 states left to accomplish this goal. I would be a little closer to my goal, but in April of 2013 I developed a Charlie horse, or so I thought, that lasted for several weeks. I continued to train in spite of the discomfort. I came home from work one day and felt very uncomfortable and had a terrible pain in my chest. I went to the ER thinking it was a heart attack. After 6 hours of tests that showed no heart problems, the doctor was going to send me home when he decided to run a cat scan and discovered the clots in my lungs. I was in the hospital for a week and sent home learning to give myself injections twice a day with clot busting drugs. Recovery was slow and I went on a blood thinner for seven months and started training for a marathon. I ran Mississippi the following January and North Carolina in April.


In September I was in South Dakota to run a marathon and had a strange, but familiar, pain in my leg so decided to go to the ER and make sure I had not developed another clot. They found nothing and the next morning I ran the marathon. I flew back to Florida and ended up in the ER with my second Pulmonary Embolism. Apparently they had missed the clot. I was in the hospital for several days and my doctor has me on blood thinners permanently. I was tested for everything and they found nothing to explain why I develop clots. My doctor said medicine doesn't know everything.
Recovery was slow again, but I continued to run and early this year I ran a marathon in Arkansas, Kentucky and Idaho. I ran in my polka dot shirt during the last two marathons and talked with other runners about my story. 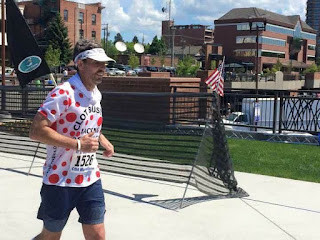 On November 1st, I am running the NYC marathon to raise money and awareness for team stop the clot. I am planning to put the names as a tribute to those who have shared their clot stories of loved one who didn't survive. They are all tragic and most were preventable. Knowledge is the key.

The best thing about having the two PE's and surviving is that life is much more balanced. I don't worry about the things I can't change. I surround myself with awesome people. I started traveling to places on my bucket list. And Last year I bought a tiny apartment in NYC and I run in Central Park whenever I can."

Please take some time and make your way to Phil's Fundraising page... he is doing an INCREDIBLE job with several months to go before the race so his fundraising totals will continue to climb... Can't to see how well he does... here the link for your reference and use...

https://www.crowdrise.com/StopTheClot2015NYCMarathon/fundraiser/philipkean
Here is hoping that Phil can in fact complete his goal of running a marathon in all 50 states... SIMPLY REMARKABLE and INSPIRING!!!

The entire blood clotting survivor community is cheering you on!