February Athlete of the Month

Greetings from the Clot Buster!

I hope that you are following along my tweets as 140 characters is all I can type now days before I am off going after Junior... it is a blast but time is limited since from reading books we go to build lego things. From there on to truck pushing and finally ball chasing. So, as you can imagine I am earning my polka-dots...
But on to more serious and inspiring business.
February's Athlete of the Month features a very special person who has been associated with NATT since the very beginning. He has witness the birth and the constant growth of the organization as a vehicle to provide people the awareness they need about blood clots and blood clotting disorders. Little that I know that this gentleman back in the day used to rock the trails in the North-East on all sorts of mountain bike races until his clotting incident placed him on the sidelines. However, he is not done. As I understand he still getting out there when possible to show all of us that it is possible to continue living your life despite a clotting incident that could very well keep you down.
Please let me introduce to you Mr. TOM HOGAN and get inspired by the answers he shared with me below... 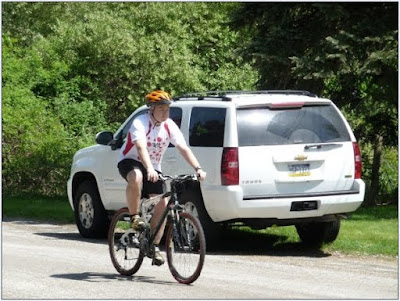 1) What is you sport/activity of choice? Why do you enjoy it?
My choice of outdoor activity is Mountain Biking. For me Mountain Biking was a way to get back into the outdoors after spending months deployed on board Submarines while I was in the U.S. Navy. It was also a good way to exercise and burn off some calories while yet enjoying the beauty of the outdoors. Growing up in the Mountains of New York where there was an abundance of hiking trails and trout streams, I truly lived in the outdoors. When I joined the Navy in 1982, I left the mountains for the ocean. When I started Mountain Biking in 1992, it brought me back to my roots. Over the years I've really enjoyed the camaraderie shared between the Mountain Biking community and enjoyed riding the trails in some of the Northeast's most spectacular scenery.
2) How did you get started in that sport?
Someone I knew competed in Mountain Bike races throughout New York and New England back around 1991. Mountain Biking was in its infancy in our area so the idea of riding a bike throughout the forest was intriguing; after all I loved hiking so what a better way to navigate throughout the forests then on a bike. From that moment on, I was hooked. In 1992 I organized an all-Navy Mountain Bike race team at the Naval Submarine School in Groton, Connecticut. Our team competed in races from New York to Maine in both the Eastern Fat Tire Race series and National Off-Road Bike Association series.
3) What is the latest milestone you achieved or plan to achieve?
I retired from the racing scene back in 1997 after two separate blood clots, a pulmonary embolism, and a broken collarbone. I started to ride recreationally and even helped to start a Chapter of the New England Mountain Bike Patrol in one of the State Management Areas. Around the 2006 timeframe I started having problems with constant hip pain which was thought to be the result of splitting and stacking firewood. As the years went on it became more and more persistent. In December 2008 I had hip replacement surgery. As a result of this, I haven't been riding my bike as much and have gotten out of shape. For 2010, it is my goal to get back on my bike and do some riding with my son who is now taken interest in the sport of Mountain Biking. I'm hoping to have my son and I participate in at least one of the New England Mountain Bike Associations organized rides this summer. 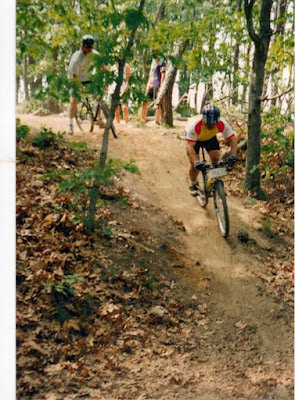 4) Tells about your clotting episode. Are you on blood thinners now? How long were you out of commission?
My history of clotting started back in 1992 towards the end of the bike season. I had just transferred from a Submarine to shore duty and started training for the next race season. I started having severe calf pain in my leg which the doctors attributed to a torn muscle as a result of biking. After several days the leg had swollen immensely and the doctors no longer viewed it as a sports related injury. A venogram was ordered which revealed a clot had extending from my hip to my ankle; I was immediately hospitalized. While undergoing treatment, the doctor became increasingly concerned with my resting heart rate. A lung scan was performed which revealed I had additionally suffered a Pulmonary Embolism. I was told at that time: (1) I was lucky to be alive; (2) I would never regain full use of my leg due to the anticipate damage. The cause of the clotting episode was not determined so I was on Coumadin therapy for six months. Right at the end of that treatment period, the bike race season began. I finished ninth in my class in the New England Mountain Bike race series that year and competed in the National Off-Road Association (NORBA) National Championships up at Mount Snow, Vermont. The following year I also enjoyed a successful race seasons which continued until August 1995. I had competed in day one of a two day race up at Sugarloaf, Maine. On Saturday I raced the downhill race where I finished in fourth place. When I awoke Sunday morning I had a pain and burning sensation in my leg which was all to familiar. I pre-rode the course and it felt a little better so I decided to race in the 30 mile Cross-Country race that day. Mid-way through the race I had to drop out due to the severe pain. I suffered a second blood clot; this time to my opposite leg. Just like the first time, the cause of the clot was undetermined. After being sent to the Navy's top hospital in Bethesda, Maryland they still could not find a reason as to why I kept developing these blood clots. Finally in 1996 I was referred to Harvard Medical where a doctor discovered I had Factor V Leiden (homozygous). This time I was on Coumadin for about two years before I was taken off it. In 2001, I was asked to participate in a low-intensity warfarin trial (PREVENT) taking place which looked into a low target INR range for patients who were high risk. Since that time, I have remained on low-intensity Coumadin therapy and will remain on it for life.
5) When were you able to get back into your activity? How did it feel that first time?
After my first blood clot I really was not sure what to expect. Being that the doctor told me I probably would not regain full use of my leg I didn't have high expectations. But as I trained I found that the disability from my Post-Thrombotic Syndrome (PTS) was not as bad as I anticipated. Yes, my leg felt as though I had five-pound weights on it, but it didn't hurt. In 1995, following my second clot, I found that my other leg also developed PTS. In 1996 I raced my last Mountain Bike race up at Sugarloaf, Maine. Though I no longer race today, I really look forward to participating in several organized rides this year; though I will need to get back into shape.
6) What is your favorite piece of gear for your favorite activity? (Bike brand, running shoes, perhaps a running singlet or the Clot Buster's Running Polka-Dot Technical Shirt...)
I would say my favorite piece of gear has to be my Performance Gel Shorts. Laugh as you may but more so then anything else on the bike if you not comfortable sitting it makes for a bad ride. And of course I have to give due credit to John Willis of Ray Willis Bikes in Westerly Rhode Island. This bike shop sponsored our Navy race team from 1992 through 1996. 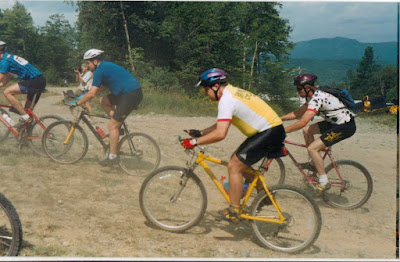 7) How much are you getting out doing your sport? (Everyday you do some training, 2, 3, 4 times per week)
My goal is to ride at least three times a week; maybe more as the summer approaches and the daylight provides opportunity for after work rides.
8) What is your favorite food? Either generally or after a workout. For me there is nothing better than a Chipotle Burrito...
Pizza; yeah its not good for you but it tastes so good.
9) If you could go some place to visit and explore, where would like to go?
I've always wanted to bike the Moab Trail in Utah. Maybe when my son gets older we'll try it. Another ride I would really like to participate in is the Continental Divide Trail which extends from Montana to New Mexico.
10) What would like to say to someone who is going through a clotting episode, perhaps very similar to yours? How can people return to do what they enjoy? Tells about your concerns and what you look out after as you got back.
My first advice would be to see a blood clot specialist; even if it only for a single visit. My biggest word of encouragement is "there is life after a DVT/PE". When recovering, takes things easy, listen to your body and your doctor. In time things will get better. 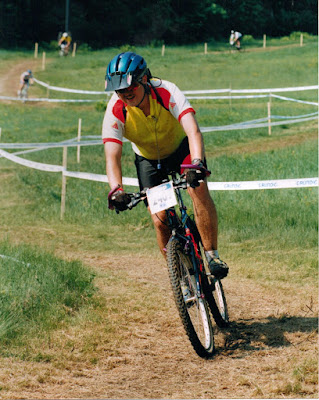 Tom THANK YOU very much for your willingness to share your story and thoughts with us.
It is a pleasure to know you will be out in the trails this year and for many more years to come! When I get around to visit out East I will be sure to ask you to take me around your favorite routes. I just hope that I don't eat it bad out on the trails. I am pathetic when it comes to mountain biking...
I just realized that both January and February Athletes of the Month have the same last name... I don't believe there is a relation here just a coincidence. What are the chances of this happening?
Thanks for reading,
The Clot Buster
Posted by Clot Buster at 1:37 PM