Do you have any resolutions?

What are you looking to accomplish this year?

One of the goals I have for myself is to continue to CELEBRATE ALL BLOOD CLOT SURVIVORS who are doing everything that the can to overcome the challenges of their clotting incident.

I want to celebrate these folks because their dedication and taking action end up INSPIRING US ALL.

2018 will be another interesting year... it already started challenging me with this weather for instance.. Who knows what else the next 360 days will bring along.  One thing I know is that I have the power of inspiring stories from clot survivors to keep my perspective grounded and moving forward...

One story that can get our year started down the right path comes to us from WES STUMBAUGH who wants to share his story because he knows that it can help others find a way to overcome the obstacles blood clotting incidents can cause.


"There is so much power in sharing your story…

My name is Wes and I live in Spokane, Washington. 2017 started off just like any other year for me. Resolutions were made to get into better shape, be a better husband, and spend more time with my two boys. February came and a friend of mine challenged me to climb Mt. St. Helens in August. I figured it was an easily attainable goal. Permits became available in February and they filled up fast so we needed to get them right away. I quickly made the decision to hike this mountain and was excited.

I was introduced to cycling in 2015 through a friend of mine in Spokane. I instantly enjoyed it and was hooked. Being outside, with the wind in your face, turned out to be a great outlet for me. This year, 2017, I was planning on putting thousands more miles on the road bike and had the ambitious goal to ride in a few century rides around the area. In addition, I began commuting 20 miles round trip to work a few times a week. Throughout the day, I would walk up 30-45 floors at work. I was feeling great and was well on my way to hiking Mt. St. Helens. 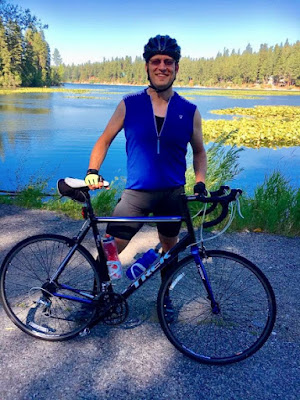 The beginning of April came and I noticed some soreness in my right calf. It seemed to hurt more when I was climbing the stairs. I instantly wrote it off in my head as muscle pain, as it felt normal, so I did not think anything of it. After a few days, the pain persisted and I began to take notice. A week later I noticed an area on my calf turning red and there was some swelling. My calf and ankles would swell up a little from time to time in that leg, as I had ACL surgery in 2009, when I tore it playing rec league basketball. It didn’t really become alarming to me until the pain began to interfere with my ability to ride to work. When I was pedaling, or when I laid down to go to bed, my calf would not stop throbbing. Easter weekend came and I decided to go to Urgent Care (there may have been a little urging from my wife). The doctor on duty took a look at my calf and told me to head straight to the ER. Ultrasounds were done on my right leg and I was informed that I had a few small blood clots causing the irritation and swelling. They put me on Eliquis and advised me to follow up with my primary care doctor within the following two weeks.

I need to give kudos to my primary care doctor as he thought that this event needed to be checked out further, as this was an unprovoked clot. He referred me to a hematologist as he just wanted to be cautious and make sure this was a one-time event or if there was something else going on.  At this time, I had no knowledge of any family history related to a blood clotting disorder. The only family event I was aware of was that my grandfather had died of a heart attack at age 58. The hematologist ran quite a few different blood tests and called me with my results. I was floored with what she told me. My tests came back positive for Factor V Leiden and two R506Q mutations were identified (homozygote). She strongly advised me to stay on blood thinners and told me that if I had two gene mutations, then she was pretty certain my parents each had one copy of the gene. Because of that, she also encouraged me to have my parents and my sister tested. Throughout the next few months, my family had tests done and it turns out each one of us has Factor V Leiden. Upon further investigation regarding my grandfather, it appears the heart attack that killed him came from a blood clot to the heart. It was an eye opening experience for our whole family to say the least.

My world slowed down a bit after I found out the news. I was nervous about exercising while on blood thinners and I stopped climbing the stairs at work and didn’t want get on my bike for about a month. It was during that time that I found this blog and began reading all the inspiring stories about how each person featured in this blog shared their story and overcame blood clots. Each person you read about set a goal and accomplished it.  I found that so inspiring. I began to work up the courage to accomplish the goal that I set back in February… to climb Mt. St. Helens. The training continued. I was able to get back on the bike and I eased back into long rides. I went back to climbing flights of stairs at work and slowly regained the confidence to push forward with this goal. August 11, 2017 I was able to make it to the top of Mt. St. Helens and it felt so good. It wasn’t the tallest mountain in the world, but it turned into a bigger feeling of accomplishment than I was ever expecting. The feeling was amazing to not give up when a setback arose, and finish a goal that I set my mind to earlier in the year before this obstacle came up. 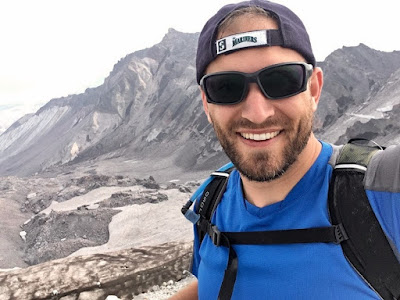 This next year, with the clotting episode behind me, I am looking forward to setting a few cycling goals for 2018. I have signed up for the Coeur d’Fondo (116 miles) next September and am planning on signing up for the popular Seattle to Portland ride (204 miles) in July when registration becomes available. I am looking forward to sporting the clot buster gear at these events as well!"

For sure we will see you sporting the CLOT BUSTER #StopTheClot polka-dots during your upcoming events... I am looking forward to see pictures of you in action all over the West Coast!

So glad to have this story to get 2018 started.

THANK YOU once again to Wes for his willingness to share.

NEVER STOP as long as you take it one day at the time and overcome.  Anything is possible for those who believe!

Stay tuned for exciting news and promos to celebrate the 10th year of this blog running... 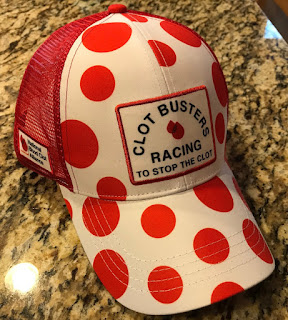 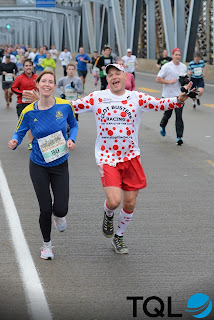 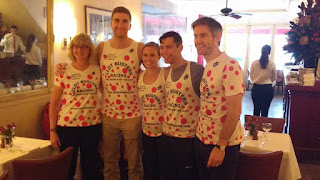 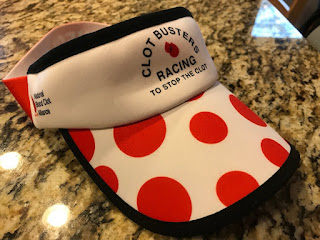 Posted by Clot Buster at 8:31 PM No comments: