This month's athlete of the month will be somewhat different.

I want to use this post to honor the memory of ANNA FRUTIGER who this world unfortunately lost last year due to a blood clotting incident. It is very sad to learn about a story like this but sadly it is the reality of the danger of blood clots.

One of the reasons why I selected Anna's story is because of the effort her brother as a swimmer at Northwestern University is putting forward to raise funds to STOP THE CLOT and to spread the word about blood clots and blood clotting disorders.

The swimming and diving team isndoing a very special event they call the "Hour of Power". What is the “Hour of Power?” Simply put, it’s an hour-long continuous relay in which our teams will swim as many lengths in one hour as possible. During the relay the memory of Anna will be remembered. If you would like to donate to this event please CLICK HERE.

Just know that on this blog post I am making a commitment to participate in the "Hour of Power" remotely from Columbus, OH. I may not be able to swim all of the hour in one effort but I will give it my best try. Follow along to see how far I can make it on December 31st!

I hope that you find it within you to donate for this very worth while cause. If you are not convinced please take some time to read Anna's story below...

"Anna Frutiger embodied brains, beauty, compassion, athleticism, and as such, seemed the picture of health while she was living her dream of becoming a dentist. No one expected that a blood clot would end her dream, and it seemed beyond belief that Anna died on May 20th, 2010 from a pulmonary embolism (PE) due to an undiagnosed deep vein thrombosis (DVT), a month after her 23rd birthday.

Anna felt pain behind her knee and in her calf four months before she died, and she attributed her pain to the stress and strain of training for a half marathon or a muscle pull. Her friends at dental school noted that she limped, and Anna was aware of becoming short of breath whenever she ran.

When her leg pain persisted, Anna saw an orthopedic surgeon who found no injury to suggest a muscle pull. After a thorough physical and review of her medical history, her doctor suspected a blood clot in her lower leg. Anna’s only known risk factor was that she was taking a third generation birth control pill. Results of an Ultrasound/Doppler of her leg were negative for DVT. At a follow-up to that exam 3 weeks later, her leg was normal shape and size, and she no longer felt any leg pain. As a result, her doctor discharged her.

After her first year finals at the University of Pittsburgh School of Dental Medicine, Anna traveled quite a bit, and flew for six hours over two consecutive weekends, then went to see friends in New York City the next two weekends which involved an eight hour bus trip with one ten minute stop. Anna complained of not being able to breathe easily when she carried groceries up to her apartment right after the bus trip. She told her parents that her symptoms were probably stress–related, since vacation was over, and the demands of school were resuming.

The next morning, Anna called her best friend to drive her to school because she felt extremely weak and didn’t think she could walk on her own. She wanted to push herself to class, because she had two quizzes that day. Anna collapsed on the lawn outside her apartment after walking downstairs, and blacked out for several seconds. Her friend called 911 and an ambulance arrived within minutes. Anna was conscious at that point, and asked her friends to call her parents in Michigan.

Anna made it to the Emergency Room, but had a cardiopulmonary arrest a few minutes after she arrived. She was immediately taken to surgery to try to dislodge the huge blood clot that caused her massive PE. Over the next two days, a team of doctors and nurses worked round the clock to keep Anna alive in hopes that a miracle would happen, something her family and friends wished for with all their hearts. Her family was euphoric two days later, because she moved her arms during the night, and their hope was that she would awake from her coma. Their hopes were dashed almost immediately when the neurological tests showed that she no longer had brain activity. Anna’s family had to make the agonizing decision to remove life support.

Despite their grief, they chose to donate Anna’s organs. Anna gave life to another, so continues to be life-giving even after her death.

Her doctors immediately tested her family and found no genetic blood clotting disorders. Her autopsy determined that Anna was not predisposed to blood clots. It seems that the birth control pill and her concentrated travel in one month were her major clotting risks.

Although Anna tuned in to her health status, 23 year olds do not suspect that anything fatal is brewing, and she probably did not link her birth control to her leg pain, or the possibility of a DVT. Although her doctor suspected a blood clot, he saw her as a low risk. Moreover, the Ultrasound/Doppler testing is effective for DVT diagnosis only 3 out of 10 times. Her family believes strongly that had Anna and they had the awareness and knowledge of the risks factors and signs of DVT in the months before Anna died that she might be alive today.

Anna loved her friends and family with every ounce of her being and always gave 110% to others, no matter what was at stake. Two of her closest friends, Sally Vitez and Michael Ratajczyk, fundraised for the NBCA/ Stop The Clot® by running a marathon and half marathon respectively in Anna’s memory."

Athlete of the Month UPDATE 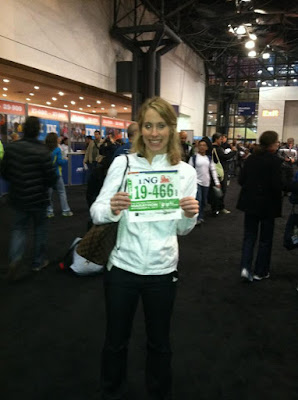 Today was the running of the ING NEW YORK CITY MARATHON

and it our JANUARY 2010 CLOT BUSTER ATHLETE OF THE MONTH - KELLY HOGAN was participating.

You continue to provide others with inspiration to keep going despite your blood clotting incident.

CONGRATULATIONS! You should be OVER THE MOON!

Enjoy the pain and satisfaction of having crossed the line! 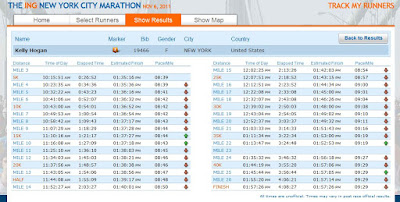