Yes, believe it or not I placed 2nd Male Overall in a triathlon I participated in this past weekend.
It was probably the smallest triathlon I will ever participate in but it was my friends the soon to be famous... HOCKING HILLS WORLD's HARDEST SPRINT TRIATHLON.
The race was a blast considering that there were only about 25 people total and the course was one of the hardest I've ever raced. Suffice to say that on the way down from one of the hills we had to climb during the bike leg I got the chance to bomb down at 41.8MPH...! definitely the fastest I've ever gone on any of my bikes.
Although, the course was a challenging one on both the bike and the run my body responded better than what I had expected. I felt pretty flat during the first part of the bike but I was able to find my legs sometime after the half-way point of the race. Of course I lost time to two seperate bees getting stuck in my helmet and having to retrieve my sun glasses as I threw them from my face freaking out from the buzzing sound in my head...I am lucky that I did not land in the ditch out there... bees stuck in your helmet can be very very very unfortunate.
But the one thing I liked the most about this race was how well my legs responded on the run where they brought me back to pass two people ahead of me so that I could claim the second place male overall. Considering the training I get to do these days I am more than satisfied.
We have been busy these last few weeks with our weekend packed to the rafters with things we want to do. So much to do so little time...
One person that has been spending sometime in STOP THE CLOT polka-dots is my good friend BILL McINTOSH from Mentor, OH. He is by far the biggest banner I have amongst the Clot Buster enthusiast since he is about 6'9" and you cannot miss him. Racing against him is also a challenge. Couple of years ago we went head to head in a Half-Iron Distance Triathlon and all through the race I had him on my heels as one step of his was about 3 or 4 of mine... he wore the STOP THE CLOT polka-dots at the Concord Half-Marathon not long ago... 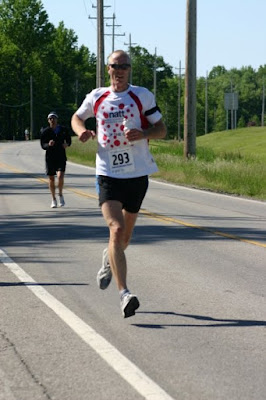 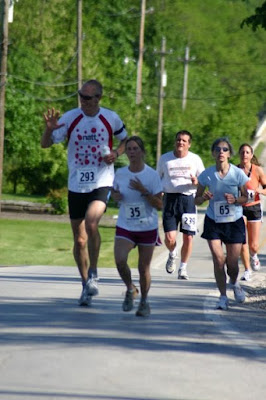 BILL THANK YOU for SPREADING THE WORD!!! 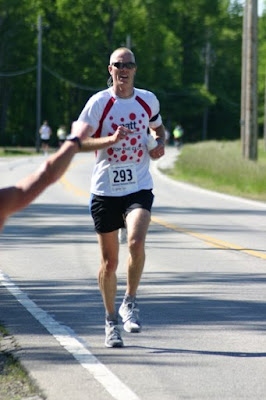 If you have photos of you wearing your STOP THE CLOT polka-dots please forward them on to me. I would love to see them and share them with everyone!

Enjoy the summer as much as you can. We sure are as we wear the polka-dots any time that we can.