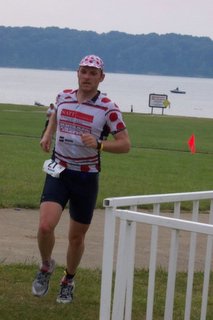 Not a bad come back to racing after the Morgantown meltdown two weeks ago. The Caesar Creek Triathlon turned out GREAT!!! I think that it had to do with the support I got from Liz and Kath coming out to watch me race. I sure missed their cheering when I raced in Morgantown… but enough of going back to that race in WV. It’s behind me and now I need concentrate on the races left on The Clot Buster’s schedule. 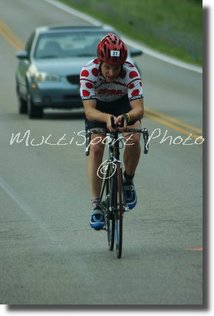 On Sunday, the weather was perfect for racing. I could not ask for anything more. The swim I was able to complete in about 23 minutes and some change. Attempting to take off the wetsuit is always a show. So, my transition times from the swim to the bike are pretty high compared to races without wetsuits. But, it does not matter because once on the bike I put my head down and went at it. I tried to keep the fastest pace that I could and on the end I averaged 20.6MPH. From there, we headed out in the run. Believe it or not, the legs felt good and I was able to press a little and actually pass some people instead of getting passed by everyone else. I was very happy on how my body was reacting to the run and how I was able to keep it together with a time of 47:11 for the 10K. All together, The Clot Buster completed the third race of the season in 2 hours 24 minutes and 40 seconds for a second place in the 25-29 Age Group. 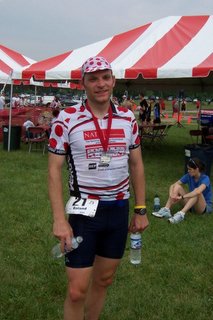 If you got the chance to read my post before the race, I wrote about having the opportunity to put The Clot Buster’s flyer (700 of them) in the race packets. Well, I have to say that the flyer along with the polka-dot outfit worked as I got to meet some people who suffered from blood clots or knew of someone who did. They were interested and glad to know about NATT and what they are doing to spread the word about blood clots and blood clotting disorders. Giving people the opportunity to know that NATT is out there for them is the best result I can ask for. We have made contact with a few people let’s see how many more we can bring into the fold. Let’s keep it going!

Keep an eye out for the guy in the polka-dot outfit out there. He just may come around you and leave behind on his wake… or you could come around and leave me on your dust. It could go either way…

Interesting website with a lot of resources and detailed explanations.
»