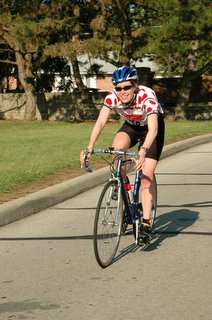 Let’s just say that she put the hammer down on her very first attempt to race a triathlons…I could not believe it but my lovely wife had a tremendous race finishing SECOND in her age group!

I think that in the future we will be hearing more about her success as she told me after the race that she was “Hooked” on the sport. I look forward to sharing the starting line with her in races to come. 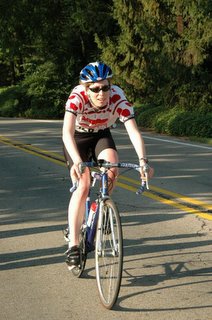 The format of this race is well suited for first time racers. Since the organizers use a “time trial” start, where competitors start their swim in intervals of 3 seconds, there is not the mass start that usually scares so many people. Liz was able to overcome some early panic on the swim portion to complete the 750 meter course and head on to transition for the bike portion of the race. She told me that on the bike she averaged over 20 MPH and she enjoyed every minute of it. After the 15 miles of biking the run came and knowing my wife she lit up the 3.1 mile run course to complete her first triathlon and take a spot on the podium of her age group. 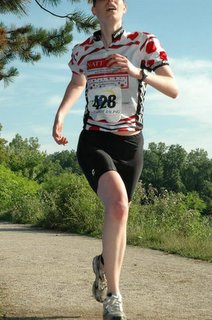 Mrs. Clot Buster running so fast the photographer could not focus on time...

I am very proud and delighted to see her complete this race. I think that I better watch out…she might take over the Clot Buster “franchise” instead of just sharing it with me…

Hopefully, in the near future we will have the pleasure to have Mrs. Clot Buster’s report on this blog. I am working on it so stay tuned…!

Liz,
I can't believe how much you look like Dan in the pictures where you are riding the bike. I'm so happy you had such a great time! Congratulations!

Here are some links that I believe will be interested

Very pretty design! Keep up the good work. Thanks.
»