Blood Clot Survivors CAN DO ANYTHING!

Friends or Family of Blood Clot Survivors CAN ALSO DO ANYTHING!

This is the time of the year when the inspiration is abundant from both camps...

But this effort is not only about running it also about raising funds to support the great work that STOPTHECLOT.org is doing everyday.  Take a look at the team's fundraising page...

On this edition of the Athlete of the Month post I would like to highlight the second part of the 2019 volunteers who will be taking part on this iconic race representing the CLOT BUSTER #StopTheClot polka-dots.  Each of these runners have an unique reason as to why they are running which can provide a great of inspiration to us all.

Read on and get inspired by the stories of the second part of our OUTSTANDING VOLUNTEERS!

Perhaps next year you can consider joining Team #StopTheClot to participate in the experience of your life while running through the streets of NYC!

“Early on the Saturday morning before Mother’s Day, I suffered a massive pulmonary embolism that travelled from my legs to my lungs,  stopping my heart. Having been revived twice in the ambulance en route to the hospital, I spent 36 hours in an induced coma, and two additional weeks in recovery. I’d nearly lost my life due to a medical condition caused by hormonal birth control, which had been 100% preventable. The symptoms were obvious, but neither my doctors, friends, nor I knew enough about blood clots to seek adequate and timely treatment. Fortunately, I am now fully recovered from this incident and training for the New York City marathon. But I will always need to monitor my health through a hematologist. My involvement with the National Blood Clot Alliance has already made a difference. For example, this past year, I urged a colleague to visit a doctor based on the symptoms he described, which were common early warning signs of blood clots.” - Mimi
“Immediately after Mimi passed out, I called 911, and the quick response time of the EMTs was critical to her survival. Luckily, I’d been there for the incident and knew enough about Mimi to help the EMTs rule out possible explanations. However, it took a second ambulance and a female EMT who understood the dangers of birth control as a trigger for blood clots to suggest that her condition might be the result of a pulmonary embolism. The first responders, doctors, and nurses seemed to try a little harder that morning, but in the moment nobody there could have guessed this story would have such a fortunate outcome. For years after I suffered from anxiety attacks worried that I, or those around me, would have a blood clot and the outcome would not be so fortunate. Becoming better educated about blood clots has enabled me to move past the stress brought on by Mimi’s ordeal and allowed me to address anxiety. Running the New York City marathon is a way to celebrate Mimi’s recovery.”- Christie 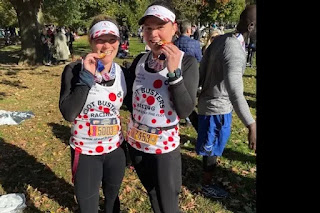 "In February of 2019, I noticed some very minor swelling in my right ankle along with some trouble breathing while going up the stairs.  Knowing that I was already at a high risk for venous thromboembolism with 2 copies of the Factor V Leiden mutation, I went to the Dr not really realizing how  serious of a situation I was in.  Once examined, I was diagnosed with a full blockage DVT in my right leg and multiple pulmonary embolii in both lungs.  If I had not gone to the doctor that day, who knows where I would be today.
I hope that with your support, I can spread the word about blood clots and drive awareness around the dangers they can cause due to lack of understanding around how serious the creeping symptoms can be.
I will run with "Team Stop the  Clot" wearing my spots proudly, I will run for my parents, who have both had blood clots, for my husband who holds a copy of the Factor V Leiden mutation and for my daughter who has surely inherited the risks from me.  I run for other friends and family who have been afflicted and for those who have lost babies due to blood clots in utero."

"I am delighted to join Team Stop the Clot in NYC and fundraise for this important cause that is so close to my heart!
I have been a part of NBCA since it’s Founding,  serving as an original Board member.  I became involved due to my own diagnosis of thrombophilia which preceded my training in genetic counseling.  During my  terms  on  he  Board  and  later  the  Medical  Advisory  Committee,  I had the opportunity to meet so many people and families struck by blood clots, and those with familial risk.  I am so proud to see the progress that has been made in providing educational resources, increasing awareness, providing support, and helping advance public policy and prevention of blood clots.  I am proud to point patients and families to the valuable tools on the website, and know the women’s health campaign  specifically has saved lives.  I also know individuals who have received an early diagnosis of DVT/PE because they knew the signs thanks to NBCA, and therefore took their symptoms seriously and advocated for appropriate diagnosis and treatment.  I could not be more thrilled to support NBCA’s efforts and mission.  Thank you for joining me!
Oh  and PS- I am also the wife of the self-proclaimed clotbuster triathlete who started this whole campaign 😉  " 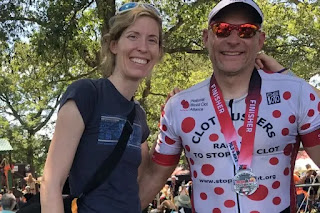 So that you can remember here are the fine folks who were featured on our October Edition of the blog.

Here you go CHRISTY...
https://www.crowdrise.com/o/en/campaign/national-blood-clot-alliance-nyc-2019/christymoore7
Here you go THOMAS...
https://www.crowdrise.com/o/en/campaign/national-blood-clot-alliance-nyc-2019/thomasmcdonough16
Without a question their tenacity and dedication is very much appreciated!
Here is wishing the team the best of luck with what is left of their training and the race itself.  This is an experience they WILL NEVER FORGET.
Thank you for reading,
The Clot Buster
Posted by Clot Buster at 10:00 AM