June Athlete of the Month

That seems to be the appropriate theme for this month.

As summer is finally settling in and racing season is here the CLOT BUSTER #StopTheClot polka-dots are ready to race.  Well that is true if we are talking about the polka-dots because physically right now I am on battle to recover from this injury that has me on the struggle bus. 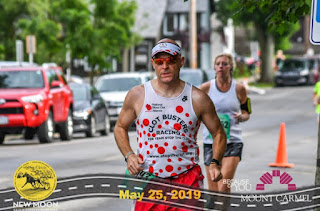 I am 4 triathlons away from completing my 100th.  My four races have been scheduled but for every step I take forward in my recovery it seems like I take two steps backwards.

For sure I am keeping my goals alive and on target but it is going to be a battle.

On a very VERY small scale I can somewhat relate to the challenges that Blood Clot Survivors experience and the many set backs that can be encountered along the way.  But every day counts.  If I have learned anything from keeping this blog going for 10 years is that EVERY DAY COUNTS when it comes to survival and we most take advantage of what we get to experience.

From the STOPTHECLOT.org Patient Story archives I found the following personal story from KATIE that for sure is representative of many of the struggles that can be faced during recovery with the finishing message of NEVER EVER GIVING UP!

Read on and get inspired to get out and make the best of what we get to have.... 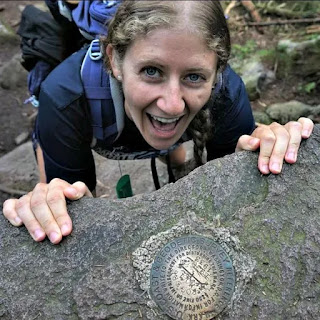 I ran my first marathon in 2017, started graduate school for a Masters in Accounting, and accepted a job with a public accounting firm post-graduation. I have always led an active lifestyle throughout high school and into college, which is why it is still difficult for me to wrap my head around the fact that I was diagnosed with bilateral pulmonary emboli on November 29, 2014, two days after my 20th birthday.
It all started about a week after I ran a 5k race for Halloween. I started experiencing shortness of breath and attributed it to the cold weather during the race. The shortness of breath escalated into pain that radiated throughout my chest and back whenever I took a breath and it soon became too painful to do almost anything. With finals approaching, it was the worst possible time to be feeling sick. I believed it was only something temporary, and I could push through it.
My roommate finally convinced me to visit health services on campus. When I met with the doctor and explained my symptoms, he told me that it was most likely just stress, and that he could give me a hug, but that all was fine. I headed home later that week for Thanksgiving break. My parents made a last-minute decision to take me to an urgent care before I returned to school, just as a precaution. None of us believed it was anything serious.
I was admitted into the hospital that same day where doctors performed a d-Dimer test, which showed a risk for blood clots. They performed a CT scan of my lungs, which revealed multiple clots in both of my lungs, and swelling in half of my heart. This is the first time I had ever heard of a pulmonary embolism, or PE. They told me it can occur from birth control containing estrogen, in rare circumstances. I was told I could no longer use that form of birth control, and that I had to be on blood thinners for the next six months. If I were to ever get clots again, it would most likely be worse, and I would be on thinners for the rest of my life.
Going from working out everyday to barely being able to walk, took both a mental and physical toll, and it took awhile to feel like myself again. Despite this, I am now the healthiest and strongest I have ever been. Blood clots are often fatal, and I am extremely thankful everyday that mine were discovered in time. My advice to others is to take it seriously when your body is trying to tell you something is off, and to seek a second opinion from a doctor if you feel like your concerns are not being addressed.
NEVER GIVE UP just like Katie did... She is a survivor and now also a Marathoner!
Thanks for reading,
The Clot Buster
Posted by Clot Buster at 12:00 PM No comments: