I can't get enough I have to confess...The hotter the better for me.

But although it is hot I need the inspiration that I can harvest from reading the SURVIVAL STORIES of BLOOD CLOT SURVIVORS I am fortunate to learn about.

Overcoming the challenges of blood clots is a journey that is unique for every individual.  But it is a journey in which you can re-discover yourself and come back as best as you can.

Certainly the story you can read below can serve as a perfect example of that inspiration and commitment to overcome and never stop.

Please allow me to introduce to you ANG who is a member of the 2016 Team Stop The Clot that will be running the TCS NYC Marathon in November.

Please read on and take it all in! 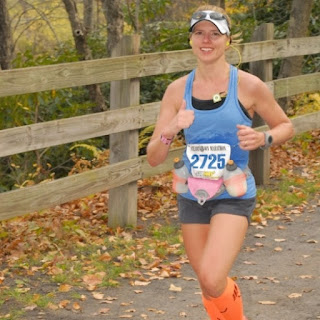 "It happened so fast that it almost seems like a bad dream.  The picture on the left was taken during the Steamtown Marathon in October 2013.  I was on my way to running a 4 and a half minute PR from the previous year's marathon and feeling terrific.  I was in the best shape of my life.  Fast forward to about two weeks after that, I started getting out of breath doing normal things, like walking up stairs, and my resting heart rate was higher than normal.  I thought that I was just trying to do too much too soon after the marathon and that I was a little overtrained.  I was having a bit of an annoying chest pain with deep breaths, but nothing that set off any alarms in my head.

I kept running during the week with friends, feeling winded at an what should have been an easy effort, and by the Saturday run with my local run club, I ended up cutting a run short and walked it back two miles after going that far out.  Friends asked if I was ok because it was so unlike me to be walking, and I said yes.  Something was wrong, but I had no idea the seriousness of it.  I went home and rested. 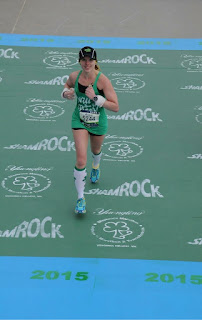 Sunday, things got worse.  I remember having a panic attack; crying on the floor of my bedroom, my heart was racing, I was short of breath and my lips looked a tinge of blue to me.  My husband helped to calm me down and wanted me to go to the ER.  I got control of my breathing and not wanting to believe I wasn't invincible, I convinced myself that I was just hyperventilating and that I would be fine.  In hind sight, I absolutely should have went to the hospital.  But I didn't.
I am so thankful that I woke up on Monday.  That morning I started coughing up blood.  That answered the question right there about something really being wrong.  I headed to the walk in clinic and was seen by a nurse practitioner.  My oxygen level was ok and because of the shortness of breath and breathing pain, she was talking about pneumonia or costochondroitis.  I told her this was very unusual for me and what she was she was saying didn't explain the blood because I wasn't coughing much.  I know she didn't want to jump to worst case scenario, but she decided it was questionable enough to send me for a CT Scan.  I was told to head right over to the hospital. 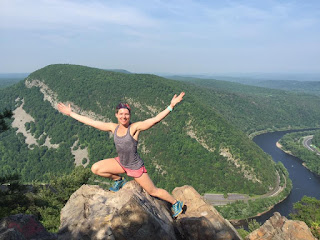 I did just that.  I remember having a hard time walking from my car to the hospital.  I felt short of breath and dizzy, as if I was going to pass out.  After the CT scan, I was told I needed to talk to the nurse practitioner who was on the phone.  As if she couldn't believe it herself, she told me I had multiple blood clots in both lungs.  I thanked her for sending me for the test, and I shudder to think what would have happened if I went home from her office with one of the alternate diagnoses. 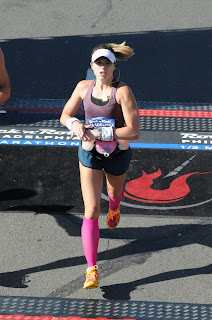 I was taken from the CT room to the emergency room.  From there, an ambulance came to take me to a bed at another hospital. Things went from bad to worse.  I developed pleurisy and an infarction and I couldn't breathe without an intense amount of pain.  I cried a lot.  But that only made things worse, because it involved taking even more breaths, and I felt like I couldn't catch my breath.  I was hooked up to a blood thinner drip and given pain meds.  They worked well for maybe half the time they were supposed to until my next dose came.  It was horrible.  I cried through my entire EKG, and at one point during my stay, the neighbor in my room came over to comfort me from all the pain I was in.  I could only speak in sentences broken by heavy breathing, as if I had just finished a race.  My resting heart rate was ridiculous for someone who was supposed to be in the best shape of her life.  I was told this was all caused by birth control pills.  On the bright side, I was also told that being in such great shape may have saved my life.
I am so thankful for the support that I had from family and friends over that whole ordeal.  I spent the first week or so after coming home mainly in bed, watching the entire Breaking Bad series, and I especially feel blessed for my husband, who made sure I had all I needed and took care of everything for me and the kids. 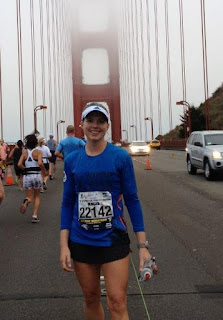 I am also very thankful for the National Blood Clot Alliance, which was an invaluable resource for me in my recovery.  I had questions.  Oh, so many questions.  They gave me hope and much needed guidance at the time I needed it most.  I've been wanting to run for Team Stop the Clot for some time now and I am thrilled to be able to fund raise for them and help in their goal of promoting awareness.  I had no clue and neither do so many others.  Many people think it is something that only happens to the elderly or overweight folks.  This is not true at all.  It can happen to anyone and knowledge is power!  1 in 3 people with blood clots in the lungs will die and often the first symptom is death.  Very scary indeed!
Recovery from PEs is very individual and I've heard stories that run the gamut.  Thankfully, I had a swift recovery and things improved greatly for me.  I worked my way back to health.  I took my first running steps in my third week out of the hospital.  By five months after my diagnosis, I was able to toe the line at the Boston Marathon, which I had signed up for before falling ill, and ran it 7 minutes faster than the year before!  A month after that I ran my first ultramarathon, a 50 miler. I have gone on to run Steamtown two more times since then, running another PR there in 2014, and am currently training to run the Boston Marathon again in April.  In the fall, I will most likely run Steamtown again, and then, what I am most looking forward to, a celebration run at the NYC Marathon with Team Stop the Clot!  I am so honored to be a part of it!"
THANK YOU Angela for being a part of this year's team.
No question that you will make the CLOT BUSTER TEAM #StopTheClot polka-dots look amazing during the race in November.
Thank You for reading,
The Clot Buster.
Posted by Clot Buster at 7:46 PM