December Athlete of the Month

What better way to close the year and celebrate the Holidays than reading the following inspiring story of survival from a clotting incident.

Let me introduce you to Mr. CEDRIC BILL and his story as told by him... 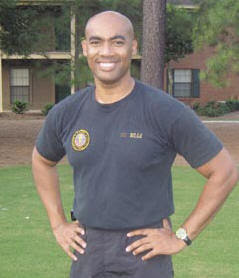 "As U.S. Army Master Fitness Trainer, I was used to physically challenging my body. So it was not unusual, when in August of 2002 I shrugged off a sharp pain in the calf of my leg – a pain that had jolted me from a restful morning sleep. “What is it,” I thought, and quickly determined that I had a muscle sprain. Shortly thereafter, I went about my business without any concern.

But as the days passed, the pain worsened despite my efforts – such as massaging. A noticeable shortness of breath soon started a few days after the onset of the leg pain. Yet, I continued my work routine. But on the fifth day since my initial calf pain, a most alarming thing occurred – my leg started to swell!

Finally, I went to an emergency room where doctors found that I was suffering from a DVT (deep vein thrombosis) and a bilateral PE (pulmonary embolism). I was successfully treated for the clotting issues and I began to restart what I thought would be a normal life.

Unfortunately, a normal life was not something that was going to follow because since that day in August of 2002 I have had repeated episodes of DVT’s and PE’s. My most frightening occurrence happened in February of 2005 while I was stationed in Hawaii. That incident produced a very life-threatening clotting situation and I was laid up in a hospital bed for three weeks.

What surprised me then, after leaving the hospital, was how long it took me to learn how to walk properly again. If you don’t know, blood clots are very painful and this one had affected my entire leg, even extending into my vena cava valve that leads towards the heart. It seemed like my body was out of control.

Doctors had inserted a filter in my vein to catch clots and prevent them from traveling to my lungs. Despite their efforts, I still managed to get clots in both lungs. Medication eased what was a critical life-threatening situation. Meanwhile, my military career was in shambles. In March, I was medically retired from the Army, receiving a 70 percent disability rating. I never saw my career ending this way – especially since I had trained entire units of soldiers (and individuals) with physical fitness programs to get and keep them in shape. I had never been seriously ill and I was way too young to have medical problems. Besides, I WAS a Master Fitness Trainer!

Physically, my body was suffering as each episode created more damage to veins in the legs – causing a condition known at post phlebitic syndrome. In addition to the filter in my chest, I now wear a compression stocking on my affected leg every day and a permanent handicap sticker now adorns my car.

The thing I learned as a personal trainer was to always train around injuries – most importantly was to keep moving as much as possible to so that good health is maintained. I do that today – walking everyday for 30 minutes and weight training at least three times a week.

What I didn’t realize before all this happened was that clotting disorders are not age discriminating and they don’t just affect those in poor physical condition. Having had three DVT’s and multiple PE’s, my life has changed completely. At age 41, I’m not done living an active life while taking my daily Coumadin and watching my diet.

I wonder how things would have been if I had only known the warning signs of this silent killer. I was very lucky. Many others are not. Remember, the best cure for this condition is prevention and knowledge of the warning signs. Seek medical attention immediately. For me, I’d much rather be running again, playing softball, and playing with my children. But I am lucky and alive."

Although Mr. Cedric's life changed due to his clotting episodes he definitely has not slowed down. After retiring from the military after 22 years of service as an Army Officer he found a new calling in which he inspires others through his motivational speeches. He is know as "Cedric "The Edutainer"" and from what I can read he does an outstanding job.

For me knowing Mr. Cedric's story only gives me more drive to do what I can to keep spreading the word and make as many people as possible aware of the warning signs of blood clots as early treatment can make a significant difference in the outcome.