Now is MY Turn! 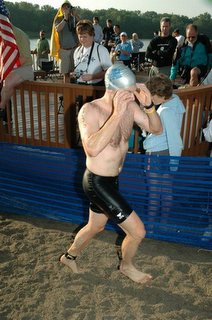 A rare photograph coming out the water.

Yesterday, I posted a tribute to Mrs. Clot Buster and her success on her very first triathlon but because I would not let her out shine me I also threw down the hammer on this race and just because things work out in an interesting way the Clot Buster also finished SECOND in his age group!!! I was very pleased with my performance in this race when compared to my times in this exact same course from last year. 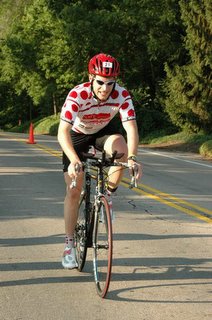 According to the results the area of most improvement has been the swim. I've been able to cut over 3 minutes from my swim time so that I could cover the 1500 meter course in 25:08 which was good enough for 19th place overall. After putting on my snazzy new white cycling shoes (which complement my outfit so well!!! Stacy and Klinton from "What Not To Wear" would be so proud!) I headed out on the bike course to light things up to the best my legs could do. After 5 laps, each worth about 5.1 miles I was able to average a speed of 22.1 MPH for a time of 67 minutes 28 seconds on the bike course. 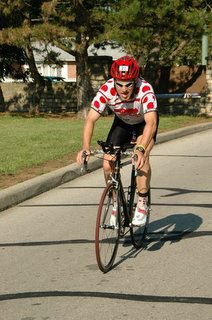 Heading into T2 ready for the run.

I have to say that the Fat Rabbit Racing really puts together a tremendous course. In how many races can you say that you raced your bike on a highway? It is so neat and fast I can't wait until next year's race. I also have to give another BIG THANK YOU to the Fat Rabbit Racing organization for allowing me to include the Clot Buster flyers into the race packets. I hope very much that people had the chance to read them and learn about NATT and what they are all about. 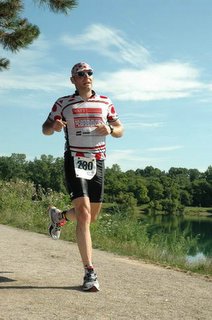 Believe it or not after the fun joy ride on the course I still had some juice left in the tank to put together a very respectable 10K run. It is been a while since I felt this good in a run but the legs were ticking over very nicely and in a time of 47:17 I reached the finish line to the encouragement of Mrs. Clot Buster who refused to give me a hug...I thought love was unconditional...I guess that I was sweating a little more than what I thought.

So, the countdown continues...Four races down, only 2 more to go! From the original goal of 255.5 Miles I have covered 153.9 Miles and there are 101.6 Miles left to race. Please don't forget that your contribution matching every mile that I race will help out in a great way an organization that is doing a lot of good. Checkout below some examples of how donations can break down if you are interested...

I really enjoyed reading your blog this week. Congratulations on your great times in this race!

I missed the posting on Mrs. Clot Buster. I'm proud of her, too.

Best wishes in getting others to learn about blood clots and what they can do to help.

Great race times. I'll keep an eye out for you at the Steelhead. I will be in a red and black Gear West Tri Club uni.

I am actually getting really nervous for this race. I can't wait to get there and get to it.

Here are some links that I believe will be interested

Your site is on top of my favourites - Great work I like it.
»

I really enjoyed looking at your site, I found it very helpful indeed, keep up the good work.
»